You are here: Home / Yoga Articles / Starting • The Foundations of Yoga / Reviews / An Interview with Tom Myers of Anatomy Trains on the New Anatomy of Interconnectedness 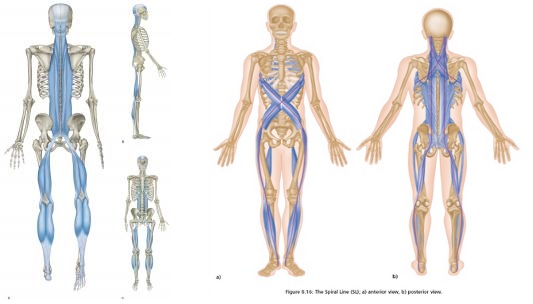 Images of some of the anatomy trains of the body.

Back in 2001, movement specialist Tom Myers published a book called Anatomy Trains. In it, he put forward an idea that was to forever change the way that people understood “stretching” – a systems-oriented view of our musculo-skeletal anatomy.

That is, that when we stretch, we’re not just stretching separate and individual muscles, but that we’re also working with fascia, which is a webbing overlaid and connecting all muscles.

This book was born out of the work that Tom had been doing in the 1990s while teaching Fascial Anatomy at the Rolf Institute.

“All the books you can find put forward the ‘single-muscle’ theory, but Ida Rolf kept saying, ‘It’s all connected through the fascia,'” says Tom. “As an exercise to cement students’ knowledge, I began stringing the muscles together through the fascia. After a few teaching iterations, the whole project became so interesting that I started to systematize these connections. I started to see the lines in assessing my clients, and then started building sessions around these lines.”

Tom, who studied directly with Drs. Ida Rolf, Moshe Feldenkrais, and Buckminster Fuller, brought decades of experience to bear as he changed the way he saw bodies. He acknowledges that the concept of viewing the body musculo-skeletal system holistically is not completely new.

“After the original publication, I found earlier iteration of similar ideas – in the meridians of acupuncture, of course, but also in the sketches of Leonardo, in Hoepke, a German anatomist of the 1930’s, and in the work of Françoise Meziére in France.” However, Tom and his team were the first people to fully flesh out and create an in-depth understanding of the neuro-myo-fascial web and how to work with it to facilitate healing.

Here’s what Tom Myers has to say on the applications of Anatomy Trains to yoga, as interview by Eva Norlyk Smith of YogaUOnline.

Eva Norlyk Smith: Tom, how does your concept of anatomy trains differ from the traditional way of viewing the body?

The traditional model of anatomy looks at the body as a machine, like a Ford truck or Dell computer. But the body is not put together like a machine; it’s more like a plant. Yet, all of the images that we use for the body are images of machines: The muscles work through levers, the lungs are bellows, the heart is a pump, the liver is a factory and the kidney is a filter. We have all these very industrial images for the body.

Eva Norlyk Smith: Can you give an example?

Tom Myers: Well, typically muscles are understood as levers that act on the bones from their origins and insertions on the bones. But the reality is that our traditional way of looking at it ignores the true attachments, which a muscle has. A muscle is not just attached to bones. It is attached to the muscles beside it; it is attached to the ligaments underneath it. That has real world implications for our understanding of the biomechanics of the body.

But most of us don’t get to go into the dissection lab to see the way things are. We look at Netter’s anatomy drawings or Trail Guide to the Body, and so on. But those books have a point of view. So there’s no new anatomy here. What is new is the concept of how we look at it.

Eva Norlyk Smith: When you say the body is more like a plant, what do you mean?

Our books have to separate things out so that we can study and understand them. But we’ve forgotten that separating things out was just something that we did for academic convenience. But this approach doesn’t actually represent the truth of the body.

Eva Norlyk Smith: If I understand you correctly, the myofascial meridians, laid out in Anatomy Trains, are also the patterns through which musculo-skeletal strain is communicated?

Tom Myers: Yes. Whatever happens — in the feet, or anywhere in the body — also happens in the neck and the shoulders. And it also goes the other way. What happens in the neck can have ramifications down to the feet as well. Fascial restrictions can cause pain patterns that are quite far removed from the site of the initial fascial compensation.

Eva Norlyk Smith: You have referred to this approach as a “third kind of medicine” or spatial medicine. What do you mean by that?

Tom Myers: Spatial medicine deals with identifying and treating fascial compensations to help realign the body closer to its ideal. Bodyworkers, such as Rolfers, do this through the manipulation of fascia. You do it through yoga as well. Yoga works directly with the plasticity of fascia. One of the great things about yoga is that it works both with the strength and flexibility of the muscles to get things balanced on the muscular side. But it also elongates the fascial fabric. When you are doing Uttanasana, standing forward bend, for example, the whole back line of your body, not just the muscles, is being tugged into a stretch.

Spatial medicine is a term for any technique that focuses on altering both the structure and functioning of the body by releasing holding patterns in the soft tissues. Anything that impacts the alignment of all the body’s structures in a holistic way to create space and more mobility is really practicing spatial medicine.

Eva Norlyk Smith: What are the implications of looking at the body in this way for yoga teachers and movement teachers?

Tom Myers: Well, the implications are the same; the tools are just different. As bodyworkers, we see shortness or lack of movement and go after it with our hands. Yoga or Pilates teachers or personal trainers address lack of movement by developing an exercise, which will first include and then integrate that area into the person’s movement. These are two very complementary things.

There are things that I can do with my hands that you cannot do in yoga, and vice versa. So as far as I’m concerned, it’s just two aspects of the larger field that I call spatial medicine, which concerns how we occupy space and move through space. We just have different methods of how we might go about it.

Anatomy Trains focuses on the body in terms of myofascial linkages. And that’s exactly what yoga postures do. And incidentally, physiotherapy research has clearly shown that you get a better training of the fascial body by working these long chains of muscle instead of working individual muscles, such as most workout machines do. So yoga people have been doing that for years.

The key to relieving chronic pain is often to release harmful physical patterns and replace them with healthier ones. When we reduce unnecessary tension in the soft tissues in the body, it has tremendous implications for the whole structure — not just our body, but our extended body-mind as well.

I’ve seen that again and again in my practice. You make these changes, and the person changes. The nervous system, the circulatory system, and the fascial system are never separate in a human being. They develop together, and they work together. So when the fascial system changes, everything else changes.

For example, think of someone who’s depressed. You can approach depression from a neurological point of view or a chemical point of view, and say that serotonin reuptake inhibitors like Prozac or Zoloft might be helpful. But depression has a fascial effect as well. It also is expressed as a specific look and shape of the body. You really don’t see people with their chest puffed out going around saying, “I’m so depressed.”

Fascia is the organ of form. We have to change the connective tissue, change things at that level. And that in turn changes people’s breathing, and when their breathing changes, their chemistry changes and their outlook changes. So, again, people have been paying a lot of attention to the chemistry and neurology of conditions like depression, and not much attention to shape. But shape is hugely important, and that’s where yoga and bodywork really shine.

So yoga, bodywork, osteopathy, chiropractic, Alexander/Feldenkreis techniques are all different ways to influence structure and movement. All these approaches work holistically with the body, and they show great promise for the future as an emerging field of medicine.