You are here: Home / Yoga Articles / Deepening • The Yoga of Life / How Yoga Helped Me / How I Learnt to Build Core Strength and Heal My Injuries with Yoga 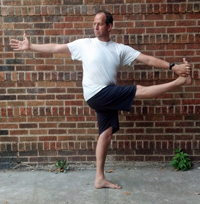 Way back in 1998, following the last of three knee surgeries, and after a year and a half of physical therapy I was finally back on my yoga mat, when a teacher asked me a life changing question.

“What are you doing to avoid a fourth surgery?”

“Nothing,” was my sheepish response.

Yoga had saved my life but it also broke my body.

My childhood had been active though no one taught me how to do anything so I was particularly horrible at baseball, the only organized sport I tried. Always super flexible, I was able to touch my toes and had a turn out that would be the envy of any aspiring dancer.

Prior to finding my way onto the yoga mat I had tried running only to come down with shin splints, and I was a long distance rollerblader – though in retrospect I got by with terrible form (rollerblading correctly is harder than it might appear).

At thirty-two years old I was wandering through life as a waiter and carpenter without a clear vision of what to do with myself.

Career and accomplishment never figured much on my radar, nor did teaching yoga until I was cajoled into taking a teacher training by a teacher who I was building shelves for (Cyndi Lee of OM Yoga).

Being naturally shy and without a girlfriend at the time, I figured it would be a good way to meet girls. (I was right. My wife and I, who met at that training, just celebrated our tenth anniversary).

My introduction to yoga was through the ashtanga practice and I was immediately addicted to the power, sweat and routine – not to mention I was really good at it very quickly.

There seemed little I couldn’t do if I showed up on a daily basis and I progressed with speed through the first series and through half of the second before my knees began their southward journey.

I expressed to my teacher at the time that my knee was hurting. His response?

“You can work through it.”

Two months later with no abatement to the pain, I brought it up again.

The next month when I told him that I was having knee surgery his response was simple.

It wasn’t his problem and I didn’t, and still don’t, fault him at all.

My body and pain are my responsibility; I simply didn’t know how to care for myself.

Once I started teaching yoga it became quickly apparent that I knew very little about caring for others; I was teaching crazy classes that were fun but grounded in no particular approach.

I would look for an advanced pose in B.K.S Iyengar’s Light On Yoga and try to teach it, figuring if I could do it why couldn’t everybody else. And when people would ask about wrist or shoulder problems I had only one answer.

This didn’t suit me for long and I began to read anatomy books as well as attending some therapeutics workshops. An alignment based yoga teacher was born. But my work was just beginning.

Developing the tone in my core that now keeps me from serious injury was a fairly arduous process. Perseverance and repetition with an eye to building the specific muscles that my loose body was lacking took a great deal of conscious process.

In so many cases every muscle that wasn’t supposed to work took over for the ones that were lacking. Retraining my brain and nervous system took years.

Before I developed my CoreWalking Program I owned a yoga center in Brooklyn that had a long hallway for an entrance.

I began to notice that students arrived and walked the gauntlet to the desk with terrible movement patterns but would do exactly what I told them in class when it came to alignment. Then, as soon as class was over they immediately reverted to their “regular life” form.

And often it was a form that lacked intrinsic strength. I realized how many people were working from their extremities just like me.

I decided to figure out a way to help people take their yoga off the mat and into their bodies 24 hours a day. The CoreWalking Program was born.

The patterns we bring to the yoga room are the same patterns that we carry through life and I began to notice just how bad the posture of the general population was – including my yoga students.

This was why I’d injured my knees so badly in yoga and needed knee operations. Instead of rebuilding my alignment from the ground up and bringing that into the yoga postures, I’d bought my bad alignment into the postures and injured myself in the process. I didn’t want that for my yoga students.

Yoga had changed my life in so many ways and the breaking down of my body allowed me to rebuild it with the help of a conscious yoga practice. That consciousness is what I wanted to help people discover – whether they were practicing yoga or not.

The CoreWalking Program is my technique for achieving this. It’s helped me take that consciousness of yoga to many people that would never have thought of doing yoga. Yoga is a practice that seems an obvious choice for so many of us – especially when we want to take care of our bodies. Yet is also too esoteric for more people than we might imagine.

Call it walking or call it yoga, the world needs to move consciously and I facilitate that in any way that I can. 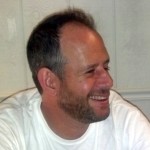 The CoreWalking Program was born out of Jonathan FitzGordon’s personal and professional experience with changing the body’s habitual movement patterns through self-awareness and repetition.

The program’s philosophy rests on the rock solid belief in our ability to change and evolve as we age. Jonathan has been practicing yoga since 1995 and has been teaching since 2000, having studied with some of the yoga community’s leading teachers.

He owned and operated the Yoga Center of Brooklyn from 2001-2009 and created the CoreWalking Program in 2005 because walking is something we all do and walking correctly is an amazing way to bring positive change to our ageing bodies.