You are here: Home / ARCHIVE / Physical Practices / Why do I resist my yoga practice when I know it’s good for me? 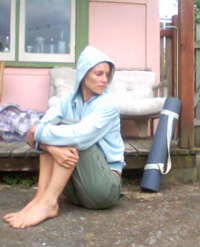 Been resisting your yoga mat lately?

This is something that’s come up a few times lately from readers – why is it so hard to get on the mat when I know it’s good for me and I feel so good afterwards?

Oh boy, have I been there! Here’s my experience, what helped me bust through that resistance once and for all, and what I learned in the process.

My first yoga experience was a ten-week Iyengar course in 1995. I knew, without a doubt, that yoga was going to be an integral part of my life. That it was Super Duper Important and would forever Change Me.

Why wait four or five years in between yoga experiences when I knew it was the thing for me?

I was seriously disembodied when I started yoga. I lived entirely in my head. Going to class and paying attention to my breathing brought me headfirst into contact with feelings and emotions I’d been denying and resisting for a decade or more. Total Unconscious Overwhelm. Get me the f%#k out of here.

You, my dear Lunchboxer, are unlikely to experience anything quite so dramatic. I hope. Your mat resistance is likely to be of a more subtle kind.

Like what I experienced six or so years ago.

I was living in Queenstown. I’d been practicing on and off for five years. I was building up a regular home practice. And now that I’d been asked to teach, totally out of the blue, I had committed to a daily practice.

On My Mat no Matter What.

Some days I’d be squirming at the thought of practicing. I could feel this wall of protesting feeling loom up inside that begged me to steer clear of yoga.

So despite this overwhelming feeling of Not Wanting to Practice, I got on my mat.

And invariably, would cry.

Yup. Every time. Tears and tears and more tears. Sometimes in child. Often in Warrior variations. Occasionally in upward dog or cobra.

This was why I felt serious resistance to practicing yoga – because I’d spent a lifetime resisting feelings and some part of me just knew there were feelings waiting to be expressed and getting on the mat would give those feelings the green light.

Invariably, I also felt so much better after having a good cry. It was such a relief.

Eventually, when I felt the resistance to practicing, instead of putting off my yoga practice and experiencing hours of that awful limbo hanging state, I would throw myself on my mat and declare,

Right! Lets bring those tears on!

It worked. Getting through the tears got easier and easier, and the number of practices where I didn’t feel resistance and there were no tears became more and more frequent.

This is my experience of Mat Resistance.

The knowing and the fear create the resistance.

Although, you could see it in another way.

When you feel the resistance to practicing, you know there is something glorious waiting for you on the mat – some kind of break-through, some kind of letting go, some kind of transformation.

So you can re-frame the feeling of resistance.

Woo hoo! I feel resistance, it’s gonna be a doozie of a practice!

And then get on your mat as fast as you can and face whatever dragon needs to be faced.

Some resistance is fear of change.

Some resistance is fear of feeling.

Some resistance is because your body is tired and wants a good rest – do yoga nidra instead!

Working with your resistance in this way, with total awareness, will re-wire your brain.

Eventually, whenever you feel resistance in your life, instead of buying into it and avoiding something, you’ll know to turn toward it and enquire into it’s nature so you know the best response.

You’ll be amazed at where this practice will take you, both on the mat, and off the mat.