You are here: Home / ARCHIVE / Meditation Practices / Why Do I Meditate? 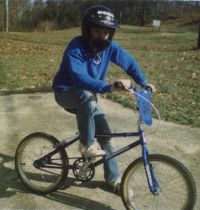 I’ve got to be honest with you.

The desire to be a well adjusted person wasn’t really what motivated me to commit to meditation practice.

I remember once, when I was about thirteen, riding my bike home from school down the main street of Whanganui. It was a normal day, nothing spectacular going on.

The usual concerns going around in my mind;

‘I wonder if such-and-such a girl likes me…’

‘Maybe I will become a rock star one day…’

And other such wanderings. Then out of the blue, a thought suddenly arose in my mind:

And right to the core of my being I felt this sense of ‘Holy shit. What the hell am I?’.

I was stopped in my tracks. There was this kind of existential shock. And just this sense of ‘What?’. As in ‘What am I?’. How could ‘I’ die? What dies? What is death?

Luckily I had a thousand things to distract myself with when I got home, and soon this existential stopping was covered over with Iron Maiden, homework, and more thoughts about girls.

But the feeling periodically arose again in my teens, often at the weirdest of times. It wasn’t until I was twenty that the feeling became strong again – and when it did, it took over my whole life. The question began to enter in to my plans, unwanted:

It began to corrode the foundations of my predictable trajectory – a career path, a nice home in the suburbs, golf on the weekends… ‘And then death’.

That reality became so strong that I couldn’t continue in the way I was headed any more. I had to give it up. I had to find out what I am.

At about that time I started getting into the Buddha’s teachings, and they were like a cool, refreshing spring.

‘There is the Deathless’, The Buddha would say in the clunky, somewhat archaically written, but undeniably profound discourses. I poured my attention over these ancient tomes like a man dying of thirst getting his first sip of water. ‘There is a path to the Deathless. That’s the only thing that matters’, was the kind of feeling (or fever) that pervaded my whole being.

So, that’s why I meditate.

Of course, the path has been paved with unexpected obstacles, and other questions and knots that have needed, and continue to need addressing, attention, and compassionate listening, but underneath the path of healing my personal wounds, my historical psychology, lies a deeper path. And that’s why I keep meditating.

When I lived in a monastery in California, at least a couple of times a week we would chant this chant in the mornings, in English:

When I first came across it I thought, ‘What? No I’m not – isn’t the point of this practice to be free from that stuff?’ And I resisted it.I thought, ‘What a downer. Why is all this stuff so negative…’

But after a while I realized what it was pointing to – that the ‘little I’, the one who identifies with the conditions of life, with success and failure, gain and loss, health and sickness – that construction isn’t going to survive this life. It’s nature is to dissolve. It’s not so serious. It’s not what absolutely defines me. Ahhh….

This feeling of ‘Ahhh’ is, for me, the fruit of meditative inquiry. It’s the relief that comes when the heart relaxes out of contraction, tightness and fixation upon a ‘future’. It’s the feeling of deliverance that comes from realizing we are not our past, and we don’t have to keep beating ourselves up over the times we really screwed up. And it’s a sense of having a lifeline to that in the heart which is unconditionally valuable, in the high times and the low times, the times when we feel creative and spontaneous and full of great ideas, and the times when we feel more like an uncooked potato.

I find that that the more I can maintain a connection to that lifeline, the more life actually seems perfect as it is. The more I lose contact with it, the more I become obsessed with ‘my problems’ and contentment seems to be always out of my grasp, somewhere in the future when I’ve finally arrived… somewhere… maybe…

But when that gnawing over the ‘wrongness’ of life is released, the heart, curiously, feels just right.

And that’s why I meditate.