You are here: Home / ARCHIVE / Physical Practices / Who knew? There isn’t just one right way to do things. Even in Yoga. 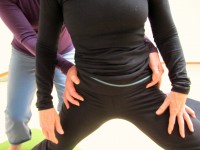 One of my Dad’s favourite stories to tell about me as a little girl is the one about my favourite word: why?

I carried the word with me everywhere until it was a scraggly, worn-out dirt-encrusted version of itself.

There’s some discrepancy as to whether or not this was, in fact, my first word. Dad says yes. Mom thinks it was second, after no. Either way, right from the start I’ve wanted to know the why behind things. Not one to be happy with a ‘because I said so’ approach, I’m told I’ve been the cause of more than a few grey hairs over the years.

When I was staying at an ashram in India, happily practicing trikonasana, I was given an adjust that went against everything I understood about the asana. And so I asked:

The woman doing the adjustment, a woman with a shiny new 500hr certification, said, ‘because that’s the way the pose is meant to be.’ (Which sounds a lot like because I said so.) Well why?, I asked. In a huff I was told if I didn’t want to do yoga properly then fine, but I’d better hope I didn’t hurt myself. And with that she turned on her heel and stalked off.

There are a lot of assumptions I could draw about this interaction. Some to do with my resisting being told what to do. Some with the newly certified teacher’s inability to say, ‘I don’t know, that’s just what I was taught.’ But for the time being I filed it away in my memory banks under ‘questions, unanswered’. And left it at that.

Earlier this month I was able to escape the rain and wind of Wellington (my beloved Welly put on a real show, complete with hail bullets firing at my tin can of a plane as we attempted to take-off) and took a rest in the calm, sunny city of Nelson, I was joining a group of teachers for a 100-hour Advanced Yoga Teacher Training course lead by Jenifer Parker of Wellington’s Healium Holistic Health.

Jenifer’s bio aptly describes her as:

‘Instructing yoga postures with such intimate clarity that [you] have no choice but to become friends.’

I’d wavered about joining the training,  as life is busy enough and I’m desperately trying to fit in this whole slow-down-do-less thing. But I knew I’d be kicking myself for passing up the opportunity to soak up as much of Jenifer’s brilliance as I could. So I put my do-less dreams on hold and signed up.

The training is three weekends spread over three months. In between our group workshops, we get one-on-one mentoring, the support of the community we’ve created and homework to really challenge the way we’re thinking about this whole yoga thing.

On the first night of the course I asked Jenifer:

‘Why? Why was my triangle assist, years ago in a far-away ashram by a person you’ve never met, wrong?’

Turns out it wasn’t wrong.

The teacher was valuing what she had been taught by her teacher.

And I was valuing what I’d been taught by my teacher.

Although different, neither was wrong.

And there it was, the elusive answer I’d been waiting for: there’s no single right way of doing things.

At training, our first homework assignment was to discuss three poses, explaining the main purpose of the pose, the alignment required to achieve the pose and what indications and contraindications there were.

One of the poses I choose was Virabhadrasana I, where I talked about it being a strong standing pose that built strength in the leg muscles and confidence in the practitioner. Another group member also chose Vira I and described it as a hip opening pose where the alignment of the hips was critical to achieving the desired result. Same pose. Different descriptions. Who’s right?

Well it turns out we both were, but we have different priorities. Because, again, there’s no single right way of doing things.

What we both had to understand though, were the potential risks involved based on our approach.

How did my version of the pose affect the back heel and the integrity of the back leg? The length and flexibility of the inner thigh? The alignment of the hips?

I could give you the answer, but where’s the fun in that? Experiment on yourself, your family and friends. Really think about what you’re trying to achieve and how you can bring it about.

With simplicity and ease Jenifer guided us through how to dissect the pose, what to look for in ourselves and our students and the adjustments needed to bring about the safest, most stable version of the pose.

Knowing the why of yoga asana has helped me delve deeper and grow my practice. I’ve found my understanding is enriched as much through asking why, as through getting those different perspectives as answers. First thinking about it myself then branching out to the yoga community. My take away message from all of this?

‘You might not always get the answer you’re looking for, and that’s okay. Just keep asking.’

I’ll be journeying through this learning and teacher training over the next few months and I’ll be back with more on how it’s all going. The self-study I’m going through right now is to observe and adjust as many bodies as possible. When not being distracted by the teaching part. Oh boy!

Sound like your cuppa? Jenifer will be running the same 100hr Advanced Yoga Teacher Training in Wellington in early 2012. Drop her a line on hi@healium.co.nz for details or, if you’re in Wellington drop by the studio at 276 Lambton Quay for a chat.

Helping to balance out her 9-5 work day, Elissa is a yoga teacher (Healium, 276 Lambton Quay, Mondays 5.30pm, and various gyms), a wine enthusiast and a dark chocolate nut (no reference sourced). Hailing from the wilds of Northern Ontario, she now calls windy Welly home. Her column, Adventures in Teaching, is designed to open a dialogue for new teachers. Voicing questions and answers, doubts and insights, she aims for harmony between action and intention. You can ask her a specific question about teaching here.