You are here: Home / ARCHIVE / Events Archive / What it means to embody presence in all that you do 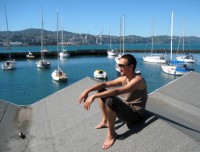 by guest author Peter Fernando, A Month of Mindfulness

One of the first times in my life I remember feeling fully present in the body was when I was in my early twenties.

It was a time when I was in quite a lot of mental distress. My life at the time was all doing – doing this, achieving that; fixing this, making that. It was all about activity. To be honest I was a bit compulsive – I felt I had to constantly be doing something to prove my worth to others.

My sense of presence was very much in the realm of ideas: of who I thought I was, and what I thought people thought of me… It was quite stormy in there! Yet underneath was a constant sense of lack, of disembodiment, of being cut off from the source of well being and wholeness.

Around that time there was a moment when I finally dragged myself to a chair and made myself sit still. It was the first time I really allowed myself to touch what was present in my heart, body and mind in a direct way. What was there wasn’t particularly pleasant – far from it – but something about the act of giving it attention, giving it presence, felt refreshing and alive.

This was different than my usual way of feeling the body, which had to be some kind of vigorous exercise, something special, other then the mundane ‘now’. In this simple attention, my heart came into consciousness of movements of energy in the body, currents of feeling. The feeling of wanting here, a bit of fearing there… This was different. I was no longer trapped in thoughts and images – I was actually feeling. I was here, right now, in my body. Alive.

When I could shift attention and rest in the felt experience of now in a bodily sense, I felt like I could come closer to the heart of whatever kind of affliction was whizzing around in my mind. And quite to my surprise, with this came an increased sense of well being and peace. It was the peace of allowing myself to feel, of allowing my humanity to arise and cease in a full, felt bodily awareness.

What a relief! Fear could be felt as a whirring or pulsating in the stomach; anger could be felt as fire, as heat in the neck, the shoulders, or even the legs. And behind all this could be a non-judgmental awareness: that received experiences as they arrived, and allowed them to pass.

This is not to say that this practice was easy – by no means. I needed teachers and friends to continually lead me in to a place of tenderness and non-judgmental kindness for myself. But underneath it was a growing confidence that allowing myself to be fully present to the realm of bodily sensation was the doorway into a sense of wholeness and ease that I had previously longed for.

This awareness began to flow into the domain of interpersonal relationship as well. I noticed how when someone was talking to me I was often busy forming interpretations, ideas about them, or even judgments up in my head.

As with the practice of meditation, I began to try to feel into the energies accompanying this activity, in a bodily sense and feel what was happening. Underneath the mind’s nattering were quite basic energies – the most predominant of which was a kind of fear of just being present. A fear of letting go into the body here and now, and not having to ‘know’ about the other person in my head.

So being a curious type, I began to investigate what it would be like to actually do that – to stay centered in the body and receive another person, with a full, open, non judgmental awareness. It was great! The experience of being with another then became more one of resonating, receiving and opening. There’s a kind of wonder that arises in this, a not knowing. And it makes things a lot more simple.

Of course there was a mental or cognitive counterpoint to this investigation – that of releasing from the habits of mind and heart that would take me into compulsive thinking – but the ground of practice was always the body: getting a felt read-out of what is happening right now. And that already feels more whole, more alive, more present.

As my interest in the art of bodily presence continued, I began to feel into ways of brightening and strengthening the energy of the heart, body and mind, in a way that amplified the sense of well being, and diminished the sense of disconnection and stress. The practice of samadhi, sometimes translated as ‘concentration’, became a subject of interest and investigation. It is best understood as a means of unifying the energies of the heart, mind and body, into a sense of singleness and presence. This presence is often described as being joyful, open and still.

There are many ways of cultivating samadhi and I began to get a feeling for which ones work for me. In the beginning I approached this area by trying to ‘get concentrated’, which was in fact more of an activity of the head, and I could end up feeling even more disconnected as a result! Over time the right approach began to reveal itself – and again the answer was in coming into the body.

Samadhi is more of a feeling practice than it is a thinking one. It is amazing how tenacious the mind is at clinging to concepts and ideas, rather than letting go into the felt experience of right here and now. So concentration practice began to take on a whole different feel – one of enjoyment in the present moment, one of sensing, feeling, listening, rather than forcing and trying.

In the original Buddhist texts on meditation it is said that when one experiences joy one’s body will be at ease, and if one’s body is at ease samadhi will naturally arise. So more than being something that we ‘do’, it becomes something that happens naturally through an interested, joyful attention in the here and now.

It is on this theme that Lynda and I will be offering a day of yoga and meditation in May. The title is, not surprisingly, ‘Embodying Presence’, and will centre around the cultivation of bodily awareness through our two complimentary disciplines. We have structured it in a way so that each yoga session of the day will be thematically connected to its meditation counterpart, and vice versa.

Our intention is to provide a holistic exploration of what it means to come into the body, and tap into its resources of well being, vitality and presence. There will be heart practices, in order to unfold our capacity to rest in a loving and open awareness, as well as practices to increase our skill at staying centred in daily life. The aim is to spend the day coming into our bodies, just as they are, and getting to know ourselves in a more intimate and direct way.

No special body is required for this – just your own!

We hope you can join us for this day of joyful exploration.

Who: Presented by Lynda Miers Henneveld and Peter Fernando
What: Full day yoga and meditation workshop
When: Saturday, May 16, 2009
Where: 31 Hobson Crescent, Thorndon, Wellington
How Much: $90

Please register interest by emailing bookings@yogaunlimited.co.nz or by ringing 04 384 4329.