You are here: Home / Yoga Articles / Awakening • Creating a More Beautiful World / Musings from the Mat / What do you mean ‘We are all One’? 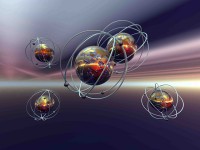 We live in a quantum universe

In his book, The Elements of Yoga, Godfrey Devereux uses physics to explain how our perspective can limit our understanding of ‘reality’

While we perceive a tree as solid, if we change our frame of reference and perceive a tree from the viewpoint of an electron, a neutrino or any of the elusive sub-atomic particles which populate the Universe of quantum physicists, it melts into a vortex of dancing, scintillating energy. …

Material objects, viewed as fields of energy, do not have the limitation they appear to have when experienced as solid objects planted firmly in the three dimensions of space. We see a solid object in isolation from it’s background. But when we experience it as a vortex of energy we can no longer make this separation.

While there may appear to be many, different, separate objects, they are ACTUALLY all particular momentary concentrations of a single vast energy field.

Read that last sentence again, slowly, because you gotta give it time to sink in. Change what he’s saying from objects to people.

“While there may appear to be many, different, separate people, they are ACTUALLY all particular momentary concentrations of a single vast energy field.”

What is a “particular momentary concentration”?

Momentary – Of this instant only

Concentration – Converging at a common center

Let those thoughts sink into your mind for a moment, and we’ll come back to it. Realise though that yogis and physicists both seek to understand the true nature of reality – one looks outward and one looks inward but in the end, always the twain shall meet.

Try an experiment right now. Lets shift our perception of the world – something we usually see in terms of material & solid – to moving and energetic. Like a physicist would do when studying sub-atomic particles, or a yogi would do when tuning into prana.

Pick up an object close at hand, something solid and real.

What do you see?

I’ve picked a ceramic sake cup, and I see solid, straight lines and a vessel capable of holding liquid.

Is this what the sake cup really is?

Well… yes and no.

From our limited human perspective it IS true. We experience reality through our central nervous system, which perceives MATTER as REALITY.

But if I were an electron, and I was observing that sake cup, what I would see is something completely different.

So what does an electron perceive?

It sees all the other electrons inside that sake cup shooting around left, right and centre.

We all know that the basic building blocks of life are predominantly space (emptiness) and energy. That’s all an atom is. With a smudge of matter thrown in.

So collectively, the many millions of atoms that make up that sake cup contain mostly energy. And that energy is not confined to our perception of the material outline of the cup either… it spills out slightly into the surrounding air.

And what is that air?

Is it just empty space as we perceive it?

No, it too is made up of energy – energy that comes from all the matter-bound objects in the near vicinity, plus the chemicals that reside in air – oxygen and carbon dioxide (and who knows what other chemicals are leeching into the air from our cleaning products and man-made materials…)

Shifting perspective from a limited human vision of matter to an electron’s view of energy is like shifting from seeing a photo to seeing a negative. Both are ‘true’ representations of what is… but they are the opposite of each other.

That sake cup is not solid at all… it just appears to be. Yet it is also solid.

All of the atoms that make up that sake cup have a tendency to exist in the same locale, in the same shape. The exact properties of the cup depend on the substance with which it is made. The sake cup has a particular momentary concentration.

It’s confined to it’s borders. It’s leeching out beyond into the air.

Now bang your object on the table. What happens?

When you banged it, did you perceive the flow of energy that followed the matter like the tail of a comet? Did you see the bounce of the energy as the matter constraining it came to an abrupt halt on the table?

Now throw that cup against a concrete floor and watch it smash.

Today, be an electron. Stop seeing matter and space (emptiness), and instead see only ENERGY.

Remember – it’s like taking a black and white photo and staring at the negative version… suddenly the familiar looks completely different.

This shift of perspective will help you to understand the energetic nature of life… and then with this understanding will come greater knowing and belief about the way the world really works.

Because when you truly start to see everything as energy… that sake cup, the table, the computer, the plants, and mountains, the lake, the people…

When you and I sit and talk… the energy that makes us up is mixing and intermingling… we are feeling each other on an energetic level.

My consciousness is bounded largely by the matter that makes me up – my body. Yet my field of consciousness of awareness also leeches out beyond my body.

Once this concept is experienced, the yogi can then stay with themselves as Awareness and shift their focus to the external world. In doing so, he or she perceives the Awareness that permeates every other living thing on this planet. In the perceiving of this Awareness, a great truth becomes clear – none of it is separate. Awareness, or Consciousness is one giant field containing many seemingly separate objects all connected via this awareness.

Which takes us right back to:

“While there may appear to be many, different, separate objects, they are ACTUALLY all particular momentary concentrations of a single vast energy field.”

This is what is means when it is said that All is One.

Energy/awareness/consciousness/divinity knows no boundaries. All IS connected to ALL. And by practicing yoga and meditation, we can actually experience this. We can feel it, see it, understand it, know it.

So what does this mean?

If we are all particular momentary concentrations of a single vast energy field… can you feel, perceive, understand, what that actually means?

Do you then understand that I am You and You are Me?

Or, in the words of one of the world’s great yogis:

In that day you will know that I am in My Father, and you in Me, and I in you.