You are here: Home / Yoga Articles / Awakening • Creating a More Beautiful World / Musings from the Mat / The Terror of Single Parenthood 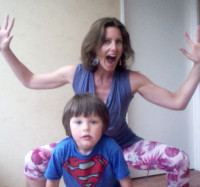 Single parenthood can be terrifying

Three years ago this New Year’s Eve I took my year old baby boy and left my mentally unstable and addicted partner.

I had zero dollars in my bank account, and an ambivalent attitude towards motherhood – something I had chosen under duress because of the pathetic belief it would make my partner happy.

Stupidity to the nth degree.

It did not make him happy.

Instead, a child was brought into an already unstable and messed up relationship. And while I was willing to submit myself to that toxicity of that relationship, I was not prepared to put my child through the same bullshit.

Fortunately, here in New Zealand single parents are eligible for Sole Parent Support when their children are under a certain age, so I was guaranteed enough money to frugally survive on while I parented, and built up a home business.

What I will never be able to say goodbye to, no matter how much I desire it, is my sole responsibility as a parent.

I am 100% responsible for the financial, health, educational and spiritual welfare of my son.

There is no one else in my day to day or even week to week life that shares this responsibility. Whatever is needed, whatever is going on, whatever happens, it’s me, all me.

The first time I ever took my son to A & E, his father and I were still on speaking terms, and, against my better judgement because I wanted my son to have some kind of relationship with his father no matter how messed up he was, my son was still going to spend time with his father.

Instead, I was left alone in A & E for three hours holding a bloody child trying to keep him quiet and entertained while the nurses sympathetically rushed me into the doctor as soon as they could.

Fortunately, I am made of stern stuff and know how to endure. I pulled myself up by my boot straps and soldiered on, minute by minute, breath by breath.

Now, three years later, I’m still soldiering on, day after day, night after night, feeling like I’m handcuffed to a small child who has a propensity for talking to me like a small dictator. He’s a challenging child and I don’t like to ask people to look after him so I can have a break because who in their right mind would volunteer to care for a child?

Of course, I do have support. Childcare for one. At times. Other times, there is none. Family sometimes, and friends who volunteer to take my son. But family and friends and childcare are not always around.

These are the dangerous times, when my patience and soldiering wears thin and my child bores easily and we both become scratchy and antagonised and I’m world-wearily aware that of the two of us, I am the only one that holds any responsibility for what we’re experiencing.

It’s all up to me, this moment that we’re creating. I must make sure we’re fed, watered, supported and having sufficient playful fun to make it a happy day.

I want to crawl back into my bed and disappear between the comforting ink and paper of a page-turner and not surface until lunchtime. Sometimes, I even dare attempt it. I put my child on a movie and slink off to my bedroom and bury my nose for as long as I can.

Inevitably, there’s a call for supplies or assistance. Food, water or the internet’s stalled. Sighing and sulky, I drag myself out of bed and stomp down the hallway to perform my motherly duties before disappearing back into my book.

If I looked deeply into it, there might be some anger toward the father. Now completely out of the scene, refusing to see his son because he doesn’t like the conditions of contact – conditions his behaviour brought on. It’s the pattern of our toxic relationship played out again and now it’s his son that pays the price. And me, stuck in 24/7 single parenthood.

I could rant and rave about taking responsibility for a child he begged I have – some kind of responsibility, any kind, but it would be futile.

He can’t even get organised enough to send birthday or Christmas presents let alone financial support. He’s simply not capable.

No, the only one who can really take responsibility for this entire mess is me.

I am the only one old enough and sane enough. I choose to have a child in the midst of a toxic relationship with a mentally unstable and addicted man. It was the most stupid decision of my life. Yet I made that decision and in the middle of all of this is One Precious Child.

And he is precious. He’s a delight. An angel, even in the midst of his difficult and challenging behaviour (some of it likely triggered by my difficult and challenging behaviour!). I’m world-warily aware that I’m simultaneously failing him terribly because I’m a lousy mother, and that I’m nurturing him lovingly because I’m an incredible mother. Both of these things are true at the exact same time – although the balance feels fragile at times.

My anger at being stuck in this situation because of my own stupidity – I was a career woman! Intent on conquering the world! Certain in my desire to stay childless! – spills out into my disciplinary action which muddies the water in a terrible way.

I find myself raging out of control in a manner completely out of proportion for the offence.

More bloody work to be done. Most issues to look at. More unravelling of the psyche.

On top of that, I’ve just been mean to my child. I’ve screamed. I’ve manhandled him up and out of the room and into time-out when he refused to budge and stuck his tongue out at me. I’ve been totally reactive and a bad, bad parent. Fortunately, perfectionism isn’t one of my issues – at least, not when it comes to motherhood.

I know I’ve got a bloody hard job and that sometimes I’m going to make mistakes and sometimes I’m going to be terrible. I don’t beat myself up. Too much. Instead, I breathe, I bring awareness to what’s going on, and I ask myself what I need right now to feel more balanced, and what my son needs to be more cooperative.

That’s the terror of single parenthood – it’s solely up to you to take care of your child’s needs plus your own needs.

Often taking care of your child’s needs leaves you too exhausted to take care of yourself and a nasty downward spiral ensues, sucking both of you into it’s vortex.

I’ve learned to throw a line up, hit my yoga mat, sit for meditation, do what it takes because if I don’t, we both go under. What do single parents without a yoga practice do? I have no idea. I fear for them.

My son is now almost-four and we’ve weathered three years together.

He starts school in a year. My business is almost sustainable. I like to think the worst is behind us. He’ll make more friends and start going on play dates. I’ll meet more friends that have children he can play with. More and more of his needs will be met outside the home – at school for example. I’lll have more time to meet my needs. All of this will pass.

And then he’ll be a teenager.