You are here: Home / Yoga Articles / Awakening • Creating a More Beautiful World / Musings from the Mat / The Mysterious Case of the Mala Beads that Weren’t 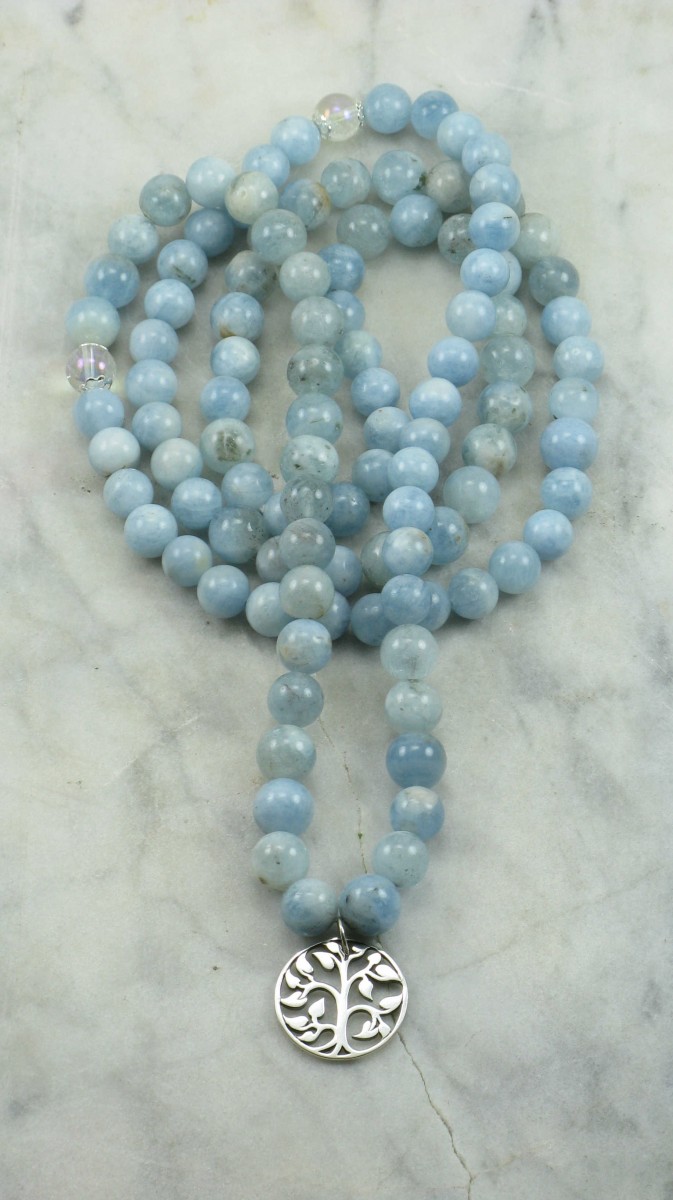 The mala beads that weren’t… and then were. Available here.

A beautiful set of mala beads made their way into my hands a year or so ago.

They are gorgeous. I’ve put them on so many times, tried them with this outfit and that. Yet every time… I end up taking them straight back off.

They look amazing. But there’s something about it that doesn’t feel right.

A year or so later, sitting in front of my altar, praying, one Friday night, as I consecrate a new journal, I spy my mala beards, coiled behind a small green statue of Ganesh.

They twinkle at me, all shy blue and iridescent light.

I pick them up, still sitting on my knees, still in a reverent mood. As I hold them with one hand, I ponder. Maybe they’re not meant to be used as jewellery at all. Maybe I could just use them for counting a yoga practice. I don’t currently do anything that requires 108 rounds, but maybe I could start.

And so, right there and then, I begin to do the simplest practice of all. I count the beads. Slipping one and then the other along the thread that binds – which, as I look more closely while moving the beads – seems precariously thin for a thread which is going to hold 108 jostling beads in constant motion.

It’s harder than I thought as I realise that in some 20 years of yoga practice, I’ve never, ever done a practice with mala beads.

This is interesting. I have to really tune in to what’s happening with my hands. And the count. Oh, and don’t forget the breath! Ok, I can do this! It’s just slipping beads along a string!

It takes all my focus to stay on count, keep slipping beads from one side to the other without accidentally slipping it back again and then keep the movement of my hands in time with the count.

Wow – this could take my practice to an entirely different place and new level. There’s a level of embodiment required here that sometimes one can avoid in a chanting or counting practice.

I’m getting close to 100 beads now and I glance down at my hands, anticipating that I must almost be back at the centre bead.

Two things race through my mind.

Welcome to Yoga:2016 where the form of yoga remains but all truth has well and truly been sucked out.

Am I the ONLY person who has noticed this about this particular brand of Mala Beads.

I go back to the website where I got the beads, which, helpfully define Mala Beads as:

“Mala is a Sanskrit word, meaning garland. They are traditional prayer beads which have been worn for thousands of years in Buddhism, Hinduism and Yoga.”

But wait, what is this?

Most of our Malas are made with 108 rudraksha seeds and/or semi precious stones along with an additional bead called a Guru Bead, this is the 109th bead of the string.

What does this mean? Does this mean I have a rogue set of mala beads? Why are some with 108 and some not? Is it because the looks of the beads would be ruined with slightly less beads?

Or is that my own assumption and bias?

Oh yes, Yoga:2016, she’s a fascinating place alright. Where you’ll find Mala beads that you can’t use to count your practice.

But, this from the home page of the website:

108 is a sacred and spiritual number.

In Yoga Practice, 108 means something. And Mala beads are defined by their function, not their look.

I email the website. She directs me to the jewellery maker. I contact them through their website. They come back to me and offer to fix the mala. I come back to this article and prepare to publish.

Oh I was so sure that there were 123 beads, and that this then highlighted and underscored my belief about the way Yoga: 2016 is…

I was almost gleeful. Holding up the beads, waving them about.

Nobody really cares about the essence of Yoga. It’s all style and fashion and commercial.

I was wrong though. Instead of revealing the corrupt heart of Yoga, my own prejudices and biases were laid bare.

Our mind is a tricksy thing. It can not be relied on. Learn to watch it. Learn to question it.

No… How fast I leapt.