You are here: Home / ARCHIVE / Meditation Practices / The joy hidden within chaos 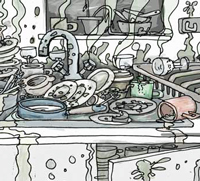 On the surface of things, spirituality can seem to be about control, right?

On the far end of the spectrum you even get teachings suggesting that the point of life is to have ultimate control over the universe. Sounds good, doesn’t it?

But is that what ‘spirituality’, or more accurately, freedom is about?

I personally wonder if it is.

What could be more gratifying to our ego than the idea of controlling everything? The idea of being God is very appealing to mine. It would love it. Nothing to let go of, nothing in my way, it’s just me and what I want, baby.

However, for many of us, the path doesn’t unfold this way.

For many of us the very force in the heart that is trying to control, dominate experience, and have things only go a certain way is felt directly, viscerally, as a cause of existential pain. It’s a kind of squeezing. A kind of tightening around experience. What is lost when we are caught in that force is the sense of freedom. Of ease and openness in the moment. If we are busy being the ‘controller’, then it’s hard to feel truly relaxed in this moment!

Of course, controlling is different than having aspirations, knowing how we want to live, and attuning to our deep spiritual longings. It’s a particular tightness. A particular kind of resistance to the chaos of experience.

I had a big wake up call around this when I was the kitchen manager for the monastery I lived at.

At that time, my practice was all about control. Get the good states. Get rid of the bad stuff. Get spiritual!

I was absorbed in my practices, and the new spiritual identity of the ‘good meditator’ that I had created for myself. For a while I felt that I could control everything – my mind, my energy, my states… but unfortunately, as it turned out, I couldn’t control the kitchen!

By some act of grace, the universe had given me three very laid back men in their thirties as kitchen-hands. They didn’t care about my ideas of exactly where the plates should go. They didn’t notice how neatly I stacked the fruit. They put stuff everywhere and anywhere. And the worse thing, for my spiritual identity, was that they did so EVEN THOUGH I HAD TOLD THEM NOT TO.

Also, at that time, an elder in the community let slip an unusually frank assessment:

‘Me?’ I thought, ‘What could you possibly mean?’. (I secretly thought that I’d controlled my self-image in his eyes – I wanted to be seen as relaxed, dammit!)

Until I began to look at why I was suffering. Or, what was suffering in my heart. It became apparent that I had invested a whole lot of security in things being a certain way. My identity felt safe, as long as it felt it was under control. The loss of control meant a loss of that identity. It felt painful.

But I started to question: Is it worth it? What would happen if I let go of that identity itself? So what if the kitchen is a complete, random, mess?

And the heart began to relax. I began to experiment with not giving orders. Quite surprisingly, the men who we’re working in the kitchen started to find their own groove. New systems emerged, without me having to create them. They weren’t the ones that I imagined, but they were good enough.

This was a revelation.

Life began to seem much easier, as my idea of being the center of the universe began to relax.

So I started to take it a little further, just to see what would happen. I began to leave right after the meal (instead of hanging around trying to make everything perfect), and just trust that something would happen. When I came back later in the day, it was usually OK. Someone had tidied up in some way. I maybe had to rearrange something, or do some extra mopping, but it was OK.

And, curiously, the guys in the kitchen seemed to like me more. A spirit of mutual respect and affection arose, the more I let go of the tightness of control. It was a wonderful lesson, and one that stays fresh in my heart.

I think it’s like that with a lot of life, isn’t it?

A sense of freedom seems to come through a sensitive and curious awareness that can move and flow with the conditions of life, as they mysteriously present themselves.

When we increase our capacity to hold the very real and unavoidable chaos of experience – the unknowable, the uncontrollable, there is a presence in the center of our being that begins to relax and brighten. It begins to trust itself. It develops a faith in its own ability to be steady in the midst of whatever is coming next.

There is a quote from T.S Elliot’s Four Quartets that I came across recently:

‘A condition of complete simplicity

(Costing not less than everything),

And all shall be well.

And all manner of things shall be well.’

It seems to be a perennial lesson for me, that when I get out of the way, and allow the heart to be simple, open and vulnerable, life becomes liveable. Answers to questions arise, and sometimes even the questions themselves disappear in the process. This very moment reveals itself, in it’s chaotic ever-fresh way, to have everything I need.

My sense is that this is where real freedom lies.