You are here: Home / Yoga Articles / Awakening • Creating a More Beautiful World / Musings from the Mat / The danger of thinking you know more than your yoga teacher 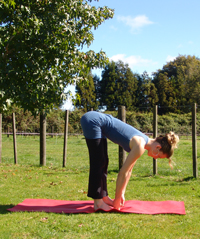 Practicing at home can be less challenging

Back in February, I wrote an article called Why I may never take another yoga class ever again.

And true to my word, I hadn’t been to a class in six months, instead practicing daily at home.

One of the reasons I’d been steering clear of classes was that in class I’d struggled with being told what to do by a teacher. Often it felt like what my body needed and what the teacher was sequencing wasn’t right for me.

But a few weekends ago I went to two yoga classes at a yoga studio that’s part of a local gym. I was curious to see what the experience would be like this time.

It was… an opportunity for observation and open-heartedness. And a reminder of the importance of perspective – seeing experience not just in terms of me, me, me but the bigger picture of how something fits into the whole.

The biggest challenge was considering how best to respond to the offered practice in a way that was respectful to the teacher and honoured my body.

The sun salutations and linking vinyasas were far faster than my natural breath cycle.

I couldn’t allow my breath to lead me through the postures without getting out of sync with the rest of the class – which was moving at more than twice my speed.

I moved faster than I normally would, breathing faster and shallower, and sometimes just going straight to downward dog so at least I could get two full breaths in the posture without getting out of sync.

This was a valuable lesson for me as a yoga teacher – the importance of providing space within sequences for the natural variances in people’s breath cycles. Especially in sequences with one breath per posture like sun salutations. It’s probably better to teach at a pace that means some people need to take two or three breaths per posture so that those with a long, full breath are able to be with their breath.

It also made me consider the importance of going slowly through a sequence – five breaths or so – setting up each posture, so that when you then repeat the same sequence with one breath per posture, you can allow the class the freedom to move at their own pace, all connecting at downward dog, or mountain pose.

Figuring out how to work with the pace and the breath wasn’t my real challenge in these two classes though.

I also had plenty of opportunity to witness my mind’s capacity for discernment  and judgement, and the difference between the two.

Judgement observes a person saying or doing something and says, ‘That’s good,’ or That’s bad’.

Discernment observes a person doing or saying something and says, ‘That’s good for me, or ‘That’s bad for me’.

One is an absolute that determines the way the world is, the other determines what a thing is in relation to me.

For example, listening to a yoga teacher telling me to go hard… judgement says:

That teacher sucks, she shouldn’t telling me to go hard. This ain’t aerobics, it’s yoga!

It was a good lesson. It was a hard lesson. Oh how I wanted to judge these teachers for their lack of knowledge, but in doing so, I risked missing out on the beauty of what they were offering, their presence and passion for yoga.

My next challenge was making sense of the sequencing.

As a teacher, especially post-LA classes with Shiva, I feel like there is so much I have to learn. Especially when it comes to creating safe, sound sequences which open the body in a logical, powerful and safe manner.

Sometimes, my knowledge of how little I know and how much I have to learn makes me think I shouldn’t be teaching at all.

I just know that if Shiva was to observe how I practice that she’d be able to pick holes left, right and centre in how I’m sequencing, and what I’m missing out.

So when I’m in class with another teacher… I’m hyper-sensitive to the sequencing.

In the middle of the class when the teacher calls out the next pose, my inner dialogue screams;

That’s not right, I’m not doing that, after that, like that!

I have to wonder… why am I resisting?

Case in point – The Unfamiliar Sequence:

The teacher cued us from Warrior II with hands interlaced behind the spine, into a forward bend on the inside of the front leg, retaining the Warrior II legs as your foundation.

‘That forward-bend variation should be used in Warrior I, not II.’

Am I stuck on a fixed idea? Or is the sequencing not right for the body?

I do it anyway, letting go of my fixed idea.

There’s too much weight over the front leg and it feels like I’m unable to ground down enough through the back leg to offset it.

We were asked to move from a hip-width forward bend into half-moon posture, which requires externally rotating over the standing leg hip joint while it’s bearing weight.

Feels unsafe to me – too much risk of people sinking into their joints while rotating.

Much safer to find the external rotation of the weight-bearing leg first, with no weight on it –  like in Warrior II – and then come into the posture.

So what to do?

I choose the second option, mostly.

I keep my mind open, obey the sequencing which feels odd to me, and stay in sync with the class.

After what I thought was the closing sequence of bridge, shoulderstand, plough, and deaf mans pose – the teacher takes us back into downward dog, three limbed dog and pigeon. After shoulderstand!

Here’s when I just go;

What the fuck? You’re making me come out of shoulderstand and do three-limbed dog? Are you crazy?!

I’m behind the class as it is – getting up into shoulderstand safely takes time for me, as does moving into plough. I’ve forgone deafmans pose and am moving down into a moment’s savasana, feeling like I need fish pose when everyone else is in three limbed downward dog going into pigeon.

Serious rebellion in my mind:

I’ve just been in shouldstand!

I don’t want to go back into downward dog!

You can’t make me!

But I can see this is a new sequence and I don’t want to skip out on it all and disrespect the teacher. Who knows, I’m only a beginning teacher myself, maybe this is a perfectly respectable and safe way to sequence?

Lets just see how it feels.

I move into downward dog.

This is wrong, insists my mind.

By now, you’re probably wondering why I went to these classes anyway, and why after the first one, I went back.

Curiousity. Convenience. It’s a beautiful studio. They had a first time $10 for two class special. And it’s nice to go to a class once in awhile.

Plus going to class gave me a chance to practice things I don’t at home:

After all, this particular gym has made the effort to incorporate yoga into it’s offering in a beautiful way.

There’s a designated yoga studio, they’re training teachers, they obviously care about the yoga. The people who attend that gym may be experiencing yoga for the first time. They’re likely there to stretch out a bit, or lose a bit of weight, or feel a bit calmer. They’re loving the experience.

They don’t give a rat’s arse that a forward bend in Warrior II isn’t stellar sequencing (and maybe it is).

They’re mostly not going to do anything nasty to their hip joints by going from a forward bend into half moon (which might be a-ok).

And they’re not going care too much about moving from shoulderstand into a pigeon sequence (who knows what benefits that could have?).

Once natural, now Beginner’s Mind is something I need to practice.

It’s a reminder of how a little knowledge can be a dangerous thing, and thinking we know something stops us from experiencing what is… it creates a separation between us and the thing.

So thank you, to the teachers who showed up and whole-heartedly taught, you gave me an opportunity to practice far more than asana in my 90 minute class.

And for that, I am grateful.