You are here: Home / Yoga Articles / Starting • The Foundations of Yoga / Practices / Is Laughter Yoga Really Yoga or just Another Fad? 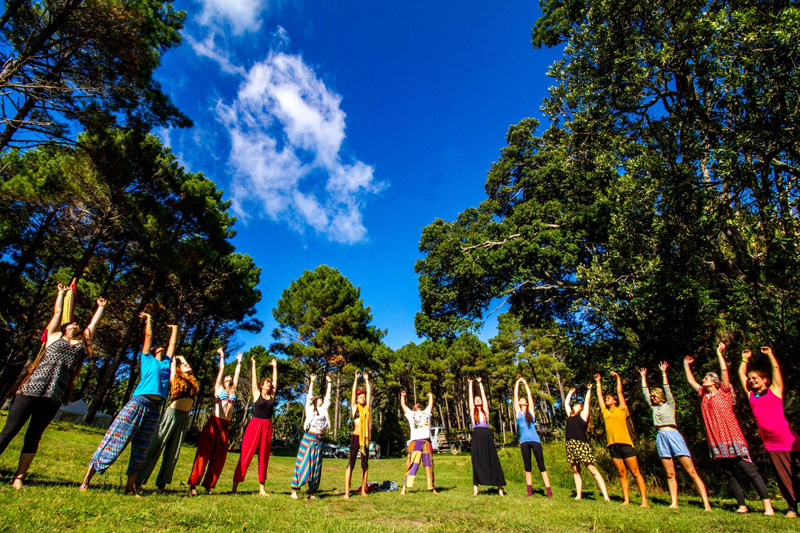 by G-Love aka Gareth Edwards

“I loved the laughing yoga, but it’s not really yoga.”

I hear something like this every time I run sessions in a yoga context like a teacher’s studio, yoga retreat or festival.

For me this is the best possible response, because it means we did yoga together and nobody noticed.

Like a mother who sneaks fresh vegetables into her children’s meals, I managed to get a bit of goodness inside us all without battling the whine of ‘aww but mum, I don’t want to eat veggies do yoga’.

But is Laughter Yoga really yoga?

For me the answer is yes.

Writing a solid, researched article on laughter yoga is on my to-do list, but for now I want to share my opinion. You can find the authorised perspective on the laughter yoga I trained in here and watch a video down below which will give you a taste of PlayTime, my session that blends laughter yoga and my songs.

Let’s start with the basics.

Laughter yoga has some of the hallmarks of yoga like postures and breathing exercises (known traditionally as ‘asana’ and ‘pranayama’) and fosters present moment mindfulness similar to meditation.

It’s very hard to dwell on the past or worry about the future while you’re crying with laughter. So on ‘tick box’ level, I think laughter yoga qualifies as yoga.

But for me it goes further than that.

Yoga is an Indian Sanskrit word that translates as ‘union’ and also has connections to the Proto-IndoEuropean word ‘yeug’ meaning ‘to join’. I take this to mean that yoga is primarily about getting beyond this perception of separation and re-join a connected sense of existence.

I wrote recently that the reason I play music is union – union with myself, union with others and union with everything. Let’s focus in on ‘union’ for a moment:

Union, according to Oxford English Dictionary is:

“The action or an instance of joining or uniting one thing to another or two or more things together, to form a single complete body or unit; the state of being so united.”

And it’s the same union I seek through laughter.

Many of us spend most of our lives operating from premise that ‘I am me’ and everything that is ‘not me’ is separate from my ‘me-ness’. It’s like we’re trapped inside a skin-clad container, absorbing experience through our senses and trying to make sense of it all.

Yet we know from Grade 1 physics that this is not reality and everything we can perceive, including our own being, is simply energy vibrating in differing ways. There is no disconnection except in the way we construct our internal sense of separation.

Now I accept that it is convenient to think of our skin-clad container as separate as it helps get around the place without bumping into too many things. But what we gain in convenience we loose in our sense of reality. And anything that bursts the bubble of this illusory separation helps give a taste of union or yoga.

Laughter yoga is like the child who cries out that the Emperor’s New Clothes don’t exist and he is fact naked.

As we share in unconditional laughter (or ‘laughing for no reason’) our ‘me-ness’ dissolves and for a brief point in space and time we feel connected – to ourselves, to each other and to everything.

The closest thing yoga seems to have to a purpose or destination is samadhi, a state of ecstasy where the ‘self’ is transcended and a profound connection to the divine is realised. It is described as a state of bliss and being at one with the universe.

As people wipe the tears of joy from their eyes or massage their cheek muscles after laughter yoga, it’s clear to me that whilst we may not have achieved samadhi, I feel certain we’ve had a glimpse of it.

That’s why Laughter Yoga is yoga, and always will be.

G-Love will be the Musical MC for this years’ Laughter Wellness Convention at Kawai Purapura, 12 – 13 September. The theme is ‘Inspiring Communities’ and covers laughter yoga, positive psychology, social connectivity, play and mindfulness. And laughter. Click here for details and tickets.

*’caught in a trap, no turnin back’ (Sister Sledge)

About G-Love aka Gareth Edwards 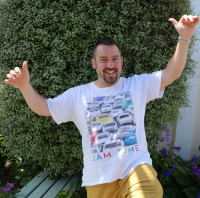 G-Love (aka Ganapati) is the name Gareth Edwards got when he trained in Laughter Yoga. He is a singer-songwriter, writer and laughing yogi. He regularly tours Aotearoa performing at festivals, conferences, and community services. Born and bred in Manchester, he now lives with his family on a permaculture farm near Raglan.

PlayTime with G-Love at Prana