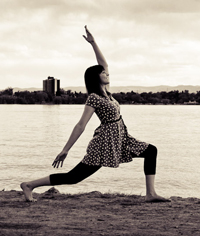 I remember the first time I took an antidepressant.

It was my third year of high school and I couldn’t swallow pills, so I had liquid Prozac in a tiny cup.

It didn’t taste like anything, but during that time nothing did.

I looked intensely at that drug for an hour before I took it, tears streaming down my face, feeling like a big fat failure.

I remember the last time I took an antidepressant.

I had moved to a new state, was on Zoloft, and weaned myself, thinking I didn’t need it anymore. I was right that I didn’t need it, but the drug’s withdrawal symptoms brought me straight back to why I went on it in the first place.

This time, however, I could tell that my brain was sabotaging me. It was like attempting The Claw in the mini-mall, when you go for the most big, obvious prize that should seem easy to extract, but it still cleans out all your cash before you win.

A year before I came off that antidepressant, I had discovered yoga.

I had no idea what to expect and I was by no means flexible; my posture was slouchy and I could barely touch my toes. I showed up once a week for a whole year, convinced there had to be a more natural way to heal.

In the beginning, yoga class was the one hour a week that wasn’t occupied by how miserable I was. Out of 730 hours in a month, four of them were spent (finally) back in my body and out of my brooding mind.

What our bodies are trying to tell us.

Ancient yogic texts reveal that yoga is not a physical exercise for the sake of exercise, as it’s sometimes thought of today. The Yoga Sutras of Patanjali, for example, only mentions asana a scant three times.

However, yoga is about the body; rather, it’s about how we use our vessel to connect to spirit.

Many of us come to yoga to reunite our minds and our bodies, but there’s no new connection that needs to be made — we just need to notice the pathways that already exist.

In the 1990s, scientists identified that our bodies have two “brains:” one in our skull and the other in our gut. Called the enteric nervous system, it’s located in tissue lining the esophagus, stomach, small intestine and colon and has its own network of neurons and neurotransmitters, which explains your “gut feelings.” Both brains play a role in our happiness or lack thereof.

Yoga asana brings awareness to our whole body: the back, front, sides, external and internal. We tap back into our gut and finally start to see our intelligence as more than cranial. It’s whole-body knowledge, and the more we pay attention the less we’re dominated by our old patterns of thinking. In fact, the less we’re dominated by thinking, period.

That’s when we begin to tap into our spirit.

Every time we unroll our yoga mat or hop on our meditation cushion, we’re conducting a scientific experiment in our bodies. I’ve known this anecdotally for years, as have countless other yogis and yoginis worldwide. But this chemical alchemy now has true scientific roots.

A recent meta-analysis published in JAMA Internal Medicine reports that daily meditation of 30 minutes a day relieves symptoms of depression by up to 20 percent and anxiety by about 10 percent. The amount of meditation training in the study was two and a half hours per week over eight weeks, much less than traditional meditation programs.

“This is fairly comparable to what other studies have found for antidepressant drugs.”

Going to yoga class doesn’t just introduce you to limbering postures, but to the power to create your own identity: one that includes how you want to feel about yourself, and then backs you up by changing the chemicals in your body to support that feeling.

Now that I’ve been practicing and teaching for several years, yoga has showed me all the ways I was lying to myself.

They are strong lies, though, and ones that don’t change overnight. Lucky for us, all we have to do is continue to show up.

After my first yoga class in 2007, I continued to show up despite meeting resistance in my body and mind. I forced myself to smile while I was driving, because even fake smiles shift your brain activity to boost your mood.

I started working out and adopted my best friend with fur, Willow, who depended on me to live. It was a welcome reminder to live, myself.

Two years after I began practicing, I immersed myself in yoga teacher training with the intent to simply deepen my practice. By the end of the three months, I realized that I had just had a crash course in learning that everything was going to be okay, though it took another year for me to receive that exact mantra from a monk.

My depression, once my full identity, no longer took up space in my body or mind. So, like someone who overstays his welcome, it left me and I never invited it back. 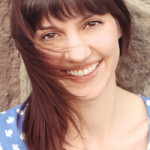 Caren Baginski is a writer and certified yoga instructor who came out of depression through yoga. She created You Again Yoga, a 30-day digital yoga and meditation guide to help you feel like Yourself again.

For weekly yoga teachings, meditations, videos and one ridiculously cute dog, follow her at HappyMomentum.com.