You are here: Home / Yoga Articles / Deepening • The Yoga of Life / How Yoga Helped Me / How yoga has the power to transform and release avidya (self-ignorance) 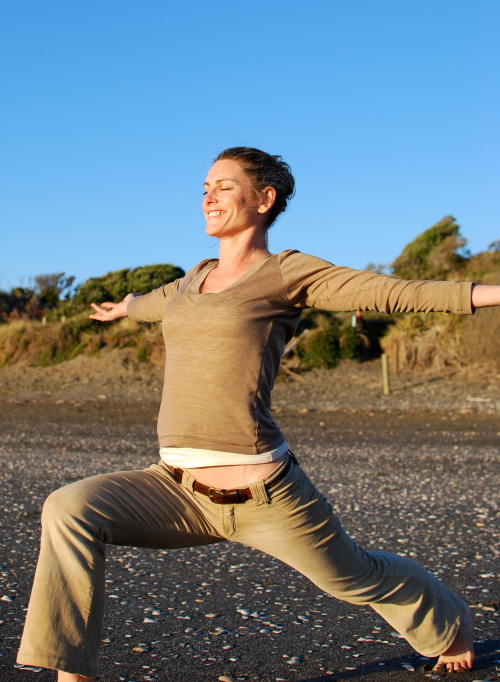 KL experimenting in a variation of Virabdrasana I

My first experience with the power of avidya came about twenty minutes into my third ashtanga yoga class. Or maybe my second. The exact number is not important, just that I was a broke backpacker partway through a pre-paid ten week yoga course.

The teacher, a long, lanky woman in her early forties, brought us into Warrior One – Virabhadrasana I.

My hips were skewed decidedly sideways. My back heel struggled to connect with the floor. My arms were crooked and screamed in protest as I attempted to bring them in line with my ears. But it was none of these physical sensations that affected me.

No, it was something else entirely.

At the time, I didn’t know what was going on.

And then I was outside the class and gone from that course.

I didn’t contact the teacher. I didn’t ask for a refund. I just stopped in the middle of Virabhadrasana I and ran for the door.

At the time, I didn’t question my behaviour. Like all the rest of my behaviours at this time, I just did what I did and kept on doing it.

What made me leave?
I seemed motivated on the outside to doing the course.
I wanted to be there.
I loved how yoga felt.

And yet still I ran away.

Now I can see that I was afraid, and I did what I always did when I was afraid. I turned and ran as far and as fast as I could, while my mind comforted me as best as it could, weaving a mental construct to support the action I had decided to take.

Only I didn’t really “decide”. There was no consciousness about my actions. My actions were all about passive reaction. I was completely mired in self-ignorance, or avidya.

Now, if I’d been paying attention at the time, I would have asked myself, “Why did you just run out of that yoga class?”

But I didn’t ask. There was no attention being paid, no witness in action. No awareness to tap into.

Have you ever been so afraid in the middle of a Step Class, or a Spin Class, or a Power Walk that you ran out of class and never went back?

Probably not eh? Yet it happens in yoga. It’s happened to me. I’ve been in other classes and seen other students flee. I’ve even been teaching and lost one or two students.

Very few of us will leave in the middle of a public event – we’re too afraid of what people will think of us.

Well, whatever I was afraid of… my fear of it was stronger than my fear of what people would think about me. And that fear was plenty strong enough. Although I didn’t know that at the time either 🙂

I hadn’t yet learned to pay attention to my mind.

Have you paid any attention to yours lately? Watched the thoughts that circle around inside it like sharks under burley?

Or maybe your thoughts patter through like the relentless march of an army of ants, so close to each other that squint slightly and they blur into one ribbon of black.

Regardless of how they shift and move and erupt and dissipate… do you notice your thoughts? Do you hear what they say to you? Do you ever stop to question the validity of what they are telling you? Do you ever ask – what’s that all about?

I didn’t back then, or I would have noticed the desire to flee while I was in Virabhadrasana I, and I would have breathed into the pose and wondered, Now what’s that all about?

And in wondering, I would have broken the chain of command that starts with feeling and moves to thought and ends in reaction. In breaking the chain between thought and reaction, I would have been able to turn the thought upside down and see what was propelling it forward. What lay beneath.

I would have recognized Fear.

In recognizing it, I would have allowed myself to feel it.

And what better place to sit in Fear than while holding Virabhadrasana I – Warrior Pose? So named because it commemorates the ideal of a “spiritual warrior,” one who bravely does battle with the universal enemy, self-ignorance (avidya), the ultimate source of all our suffering.

Instead, mired deep in said self-ignorance, I wasn’t even aware that I was afraid. All I knew was that I had to get out of that yoga class, right there, and right then.

Avidya won that battle, as it wins most battles for those of us that have no self-awareness.

Yet some 9 years on, I am still here, still practicing yoga. I may have quit that course, but something else inside me, the part that loved yoga, got me back to classes.

I learned to stay on the mat when feelings and sensations began to arise. I learned to sit with them. To allow them to move though me. All the while doing battle with avidya.

It is this ability to change the way we interact with our selves and with reality that makes yoga so powerful. Combining awareness of breath with opening the physical body creates doorways into our suppressed pasts. It allows us to let go of all that holds us back, all that subconsciously drives us, all that we no longer need.

When we practice yoga, it is not just our bodies that change, but our entire selves that morph. Like a caterpillar entering into a cocoon, yoga reveals the butterfly within.

And this happens even when we’re only practicing physical postures. We may think we’re just getting a work out, but asana works deep into our nervous system, deep into our bones and our organs, our joints and our heart. When we practice, day in and day out, week in and week out, we learn things about ourselves we didn’t know before.

Whether we want to or not, we begin to wake up.

I still have a way to go in Virabhadrasana I. Every time I practice, the pose feels different, and new nuances reveal themselves to me. It is a constant process of unfolding. And the same goes with avidya. Just when I think I am truly getting to know myself, another layer of ignorance is revealed, peeled back, stripped off.

But now, instead of running from the pose, I enjoy it. I spend long periods of time coming feeling my way slowly into it. And I teach it this way too. I’ve since discovered that Virabhadrasana I is a posture for “standing forward in your truth”. All those years ago, the truth was, I was living in deep fear and wasn’t even aware of it.

It took yoga to show me this.

What will yoga show you?