You are here: Home / Yoga Articles / Awakening • Creating a More Beautiful World / Musings from the Mat / How to Use Your Yoga Practice to Cultivate Specific States of Being 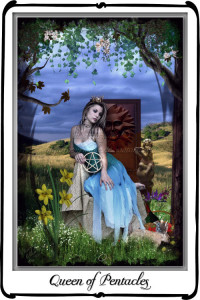 Queen of Pentacles – at home in her world.

When Wanderlust asked me to submit four classes to teach at the inaugural four-day festival in New Zealand, I pondered how to theme those classes.

One of my yoga students had recently told me how she thought my teaching was Goddess-focused and she always felt like I was helping her step into her feminine power in class. I pondered that for a few days.

And then it hit me. I was a long-time Tarot enthusiast and love the symbology and depths of insight revealed in Tarot cards. What if I was to theme each class around one of the four Queens?

They were, respectively, Courage, Compassion, Discernment and Abundance. These were the gifts of each of the Queens as I felt them.

This gave me themes for my four classes – the Bhavana of Courage for example.

My nature is to always research and immerse myself deeply in any material I’m working with, so I hit Google to find out more about Bhavana. Sometimes you need go no further than Wikipedia to find what you’re looking for:

Bhāvanā literally means “development” or “cultivating” or “producing” in the sense of “calling into existence.” It is an important concept in Buddhist praxis (Patipatti). The word bhavana normally appears in conjunction with another word forming a compound phrase such as citta-bhavana (the development or cultivation of the heart/mind) or metta-bhavana (the development/cultivation of lovingkindness). When used on its own bhavana signifies ‘spiritual cultivation’ generally. ~ Wikipedia

I began to play with sequences, using creative circular sun salutations and energetic movements to see if I could call forth feeling states. I tested my ideas on my weekly yoga students, watching how sequences settled in their bodies, and observing the effects on their mental and emotional states of being.

It was powerful work, and the students experienced some profound experiences as I honed the sequences and the way I taught them.

That way of approaching yoga worked for me. The postures were no longer front and centre, but instead used in service to a deeper purpose.

Each class, we stepped onto our mat with the intention to call into existence discernment, and then that would inform everything we did – the mudras we used, the asana, the pranayama, the meditation. It felt like sacred work and it felt ritualistic.

The beauty of developing a body of work like this is I have no idea where I’m going when I start. It’s like following breadcrumbs. It feels like this thing is already out there, and all I’m doing is tuning in and paying attention, following my intuition and letting it reveal itself.

Once I had the bulk of the work done – four classes planned out with multi-layers – I decided it was a wise idea to do a ‘juicy run’ (a dry run sounds so… dry!) before Wanderlust. A quick phone call to a friend in Napier secured her support to act as local host and we were on to organising The Bhavana Immersion.

As I contemplated the appropriate order in which to teach the classes, another layer revealed itself. I realised that this was the journey I had been on – and was still on – since my life imploded in 2004.

Post-implosion, the first virtue I needed to actively cultivate was courage. I needed the courage to face what had happened to me – because of me – and do the hard work necessary to heal and understand.

Yet I couldn’t do this work without cultivating compassion because otherwise it was too easy to feel guilty, ashamed and bad. I had to be compassionate with myself in order to face the truth of my experience without beating myself up about my behaviour.

That life implosion had included two episodes of psychosis, which you could define as the inability to discern which of the mind’s thoughts to believe or act on. The cultivation of discernment, especially in the wake of the intense emotional upheaval I had expereinced, was crucial. I had to learn what was true for me and what was right for me.

Finally, through the active cultivation of courage, compassion and discernment I was beginning to feel a sense of abundance again – something that is rooted in generosity and stems from a healthy sense of self-worth.

This was the natural sequence of events – Courage, Compassion, Discernment and Abundance.

The first three supported the final state of being. As I contemplated this journey further, I saw another layer.

Courage comes from both the third and fourth chakra. It is a matter of the will, of determination, of stepping up, but also a matter of heart (as the etymology of the word reveals).

Compassion’s natural seat also felt like Anahata, but moving up and into the fifth chakra, Vishuddha. Vishuddha is how we communicate with other people, and also how we communicate our own needs and boundaries. Yet we need courage to be able to act on our compassion, whether it is for ourselves or others.

Discernment is of course clear-sightedness. It’s our ability to cut through the crap and see what is true.

This is the work of the sixth chakra, of Ajna. Yet without the connection to seventh chakra or Sahasrara we can lose our spiritual connection and our discernment can become dry and merely intellectual.

Finally, once we have developed the third, fourth, fifth, sixth and seventh chakras we move around to the first and second. This is our sense of rootedness and place in the world, and also our relationships with other people, with our creativity and money. This is all about abundance.

The four feeling states I had chosen mirrored the psychological journey through the chakras that we can take. (Why start at the third and not the first? That’s another article I’m afraid!)

This was the order I taught the classes in Napier – the first time I’d strung them all together. It was a fascinating experience to observe in both myself and the students. I was shocked to see I was super nervous going into the first Bhavana – that of courage. Yet this seemed appropriate because it meant I had to sit with those difficult emotions while fronting up and delivering the first portion of the session.

As we moved through the sessions, sharing our own impressions and ideas of each feeling state, I found I was learned as much from the students as they were from me.

The body of work was still developing, but now I had the assistance of fifteen other people to contemplate and work with the material.

I’m still immersed in my own journey through these four feeling states, but that journey has become more conscious.

I see how each feeling state supports and intertwines with the others, and how each is necessary to provide that strong foundation for abundance. That’s my focus this year – the bhavana of abundance. It’s cultivating and calling forth a strong sense of rootedness, of generosity, of flowering and fruiting.

So often our yoga practice is narrowly focused on the postures we’re doing – is my leg in the right place? Where do I put my arm? Am I strong enough for this? Am I flexible enough?

If you know you need more courage in your life, imagine stepping on to your yoga mat every morning with the intention of cultivating courage.

Imagine dedicating your practice to courage – feeling it, being it, living it.

Now you’re no longer just practicing asana, you practicing mastery of Self.

And ultimately, isn’t that the point – to master one’s Self to the extent that eventually the Self is seen for the illusion that it is?

Because after all, when we master the Self, who is it that’s doing the mastering?