You are here: Home / Yoga Articles / Awakening • Creating a More Beautiful World / Musings from the Mat / Can We Manifest our Way into True Love? (How about Yes!) 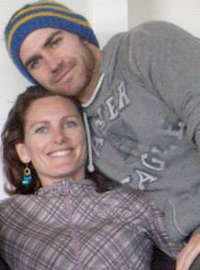 Six months ago, I decided I wanted to step into relationship again.

But when you’re a single mother in your late 30s living in a small town with only 300 people… the chances don’t sound very high.

Factor in a serious commitment to yoga and conscious relationship – whatever that means – and it seemed the chances were even less.

But I wanted a relationship, wholeheartedly, and so I did what I could to open up to this possibility.

I declared my desire, writing it and publishing it in public no less. And I started looking at what that public declaration brought up for me – what was there inside of me potentially blocking the possibility of relationship. Finally, I kept showing up to my life and paying attention to what I could feel, moment by moment.

When a friend invited me to a hot tub party in Queenstown one Friday night, I groaned. Oh, I wanted to go… but it was an hour drive each way and I’d have to get into a bikini. Two formidable obstacles to heading out to a party and relaxing enough to enjoy oneself.

But I could feel a subtle undercurrent suggesting that I go to the party. And then my wonderful flatmate offered to babysit for me.

But I have to wax my legs, I responded lamely.

So wax them! She replied.

Goddamnit! But I knew this was a party to attend. So I got out my money-saving home wax machine and poured hot liquid on my legs before ripping all the hairs out by the root. Fun times. In the midst of leg-waxing – up, close and intimate with my winter-white 38 year old legs – I was filled with the thought of revulsion about having to get into a bikini in public.

But I caught myself.

I mean, really! How damn pathetic. There’s nothing wrong with what I look like in a bikini. I’m a woman. That fact alone makes me sexy. I’m 38. There is no legal requirements to look like a swimsuit model just because I’m putting on a bikini.

So I got over myself fast, and zipped down the road to that hot tub party where I proceeded to met an intelligent, witty, sexy Irishman who made me sit up and take notice.

It took a mountain of will power to drag myself out of the hot tub at midnight to make the drive home at a decent hour so I could be fresh for my child in the morning.

Yes, I’d met the man I wanted. That’s when most movies fast forward to happily ever after. Oh, there might be a few challenges along the way in getting together with the man of your dreams, but very few that truly test your character.

Not for me. My character was about to be well and truly tested.

First, I got to see the way my mind liked to spin all kinds of fantasy and illusion, goading me into manipulating my external circumstances to create the scenario it wanted. I ignored it all. I watched my mind spin it’s stories and I refused to respond to any of it.

Instead, I focused on responding to what was actually happening in front of me – not what I wanted to happen, or what I wished was happening.

This broke a life-long pattern of behaviour.

Second, I spent time reviewing other relationships and what had and hadn’t worked in them. I chose to write about one relationship in particular – where my boyfriend Mike and I had fallen madly for each other in a short space of time. Until one fateful day where something I said triggered something in him and he packed up and took off.

Unable to trust the experience, or accept what was happening, I chased him down and persuaded him to return without doing the hard work necessary on the underlying issue that had been brought to light.

I was more interested in preserving the state of being we’d been experienced (attachment!) that working with what was actually there.

Two years later, our relationship disintegrated under the weight of that unresolved issue.

Mindful of the dangers of being attached while being in relationship, I used the time while Leighton was overseas to break any attachment I had to our blossoming relationship through a meditative technique. I literally meditated on the end of our relationship and went through the emotions to see how it would feel and what would happen.

Less than three weeks after that, life imitated meditation and my article when Leighton packed up and walked out, unable to handle the stresses of dealing with my four year old son. It looked like our relationship was over, but to me, it felt like just another test.

And that’s how I approached it.

I faced squarely into the apparent relationship break-up and just felt whatever there was to feel, staying with the emotion, and my breath, and staying present.

I listened to what Leighton had to say and owned the aspects that were my responsibility while standing firmly in my power. We kept the lines of communication open.

The issue that had risen to the surface was a big one – my son. I’ve parented him by myself for most of his life and it’s been bloody hard work. I didn’t know what I was doing, and I haven’t always made the best decisions. Leighton’s worked with kids his entire life – he’s a coach and a teacher. He could see the mistakes I was making and how it was hurting both me and Samuel.

So a few days after Leighton had left, we met up to discuss everything. We listened to each other’s perspective and heard – truly heard – what the other person was saying.

Now, with everything on the table, including our love and commitment to each other, we were able to collectively come up with a game-plan that could work for all of us – Leighton, me and Samuel.

It felt like a layer had dissolved between us. I was no longer afraid to say what I felt. Leighton realised he didn’t have to take everything so seriously. And so far, our new game-plan is working. It’s going to take time, but there’s no stress, anguish or angst because each of us knows exactly what’s going on and how we’ve agreed to face into it. Most importantly too, we’re loving and supporting each other through the process.

I’ve never been in this place in a relationship, ever.

I’ve always got stuck at the level below this – when the issues arose. Every relationship I ever had would have issues – but we could never figure out a way to move through them. Either we couldn’t speak the truth with each other, or we couldn’t listen fully to each other, or we didn’t have enough love and commitment to come up with a game plan and stick to it.

This week – with game plan in place and ego layers dissolved – I’ve been experienced levels of intimacy with Leighton that are brand new to me.

It’s only in this process that I realise how much I was playing a role in previous relationships – I was trying to be the caring, loving, dutiful girlfriend or partner in order to have the loving, caring wonderful relationship. I play this role, you play that role, and together we experience that reality right? Wrong!

All that happens in role-playing games is we end up hiding behind masks and no real intimacy can occur.

It’s a huge watershed. I thought I had to be a certain way to be loved. I didn’t understand that no relationship would ever work – could ever work – until I was just me.

At age 38, with six major long-term relationships under my belt and a handful of shorter connections, I’ve finally achieved something that was beginning to feel like an impossibility – I’m in a loving, committed, conscious relationship with a man I adore. Never mind the extremely narrow odds against my desires when I declared them six months ago!

Yes, despite the odds, I’ve manifested the relationship I wanted because of the actions I took.

And it wasn’t easy. It was bloody hard. But god, oh so worth it.

Oh so worth it.

I’d do it all over again in a heart-beat.