You are here: Home / Yoga Articles / Deepening • The Yoga of Life / Living Your Yoga / How to deal with uncomfortable and difficult emotions 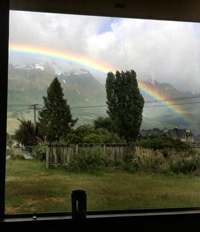 It’s been one of those days – when you could barely drag yourself out of bed and you felt like bursting into tears at the slightest provocation.

The same life that looked awesome last week has paled into sepia and you feel like you’re moving through molasses. You begin to wonder:

What the hell is wrong with me? Maybe I’m depressed. Maybe I’m doing the wrong yoga practice. Maybe I’m living in the wrong town. Maybe I need a new job. Maybe…

But what if… what if nothing was wrong with you, and nothing needed to change?

What if everything was perfect and these difficult and uncomfortable emotions were just a feedback mechanism in your mind/body interface designed to transmit information?

For a start, you’d stop looking for a way to change how you were feeling, a way to fix it or cure it or heal it. You wouldn’t reach for the sure-fire emotion suppressants like alcohol, sugar, relationships, facebook or tv. Instead, you might be curious about the message these emotions were attempting to pass on to you. You might stop, tune in and listen. You might pay attention and feel into those uncomfortable sensations in the body.

What happens when we fully allow ourselves to feel the most difficult and uncomfortable of all emotions?

You’ll discover that emotions and the sensations that give rise to them are fleeting. They last thirty seconds maybe. A minute tops. They come in waves, the intensity shifting and changing, ebbing and flowing. In sitting with the feeling, you may notice the stories that the mind throws on top. Those stories are so fast and so natural and so much a part of who we are it can be difficult to catch them before we buy into their premise.

Therein lies our suffering. Those thoughts that arise out of the sensations.

There’s something wrong with me.

Don’t just think that thought – catch it. Engage it. Talk to it.

Why is there something wrong with me?

Because I wouldn’t be feeling this way if there wasn’t something wrong with me. It’s wrong to feel like this.

Says who? Is that true?

Is that belief actually true?

Is it wrong to feel how you feel?

Thoughts that are generated by beliefs which may or may not be true. (And likely aren’t).

Yesterday, wanting just a moment of peace and quiet and a moment of privacy, I went to the toilet. My son, as he always does, went to follow me in. I asked him to wait outside. He didn’t want to. I held the line.

Sometimes, you just want to use the toilet by yourself without a babble of conversation from an almost-three year old.

Shutting the door, I sat down and listened as he went toddler-ballastic screaming and shouting and hitting the door and making my moment of peace and quiet anything but. I yanked open the door, furious that I couldn’t even have this one moment to myself and looked down at this pint-sized child furious that he couldn’t come into the toilet with me and something inside me broke.

Instead of riding the anger and allowing it to fill my body as it has been doing, turned me into a stern and forbidding parent with a too-loud shouty voice I allowed myself to feel what was under the anger –  thanks to some insight from Jack Kornfield in his book The Wise Heart:

Anger is a state of mind that strikes against experience, pushing it away, rejecting what is presented in the moment… anger almost always arises as a direct reaction to a threatening or painful situation.

Anger is a strategy to help us feel safe, to declare our strength and security… When a painful or threatening situation arises, we can open our eyes to it. When we can learn to bear our own pain… we will no longer blame and inflict it on others, neither family members or other tribes.

Without anger to shield me from the situation, I could feel pain arising. I took my son to his bedroom and asked him to stay there for three minutes for attempting to bash the toilet door down. I, in turn, collapsed in my bedroom. Sitting, I began to sob. It was like a damn being unleashed.

At some point, Samuel came in and asked if he could leave his bedroom. He asked why I was crying. A part of me wondered what harm it does to him to see me cry, even as another part of me answered that this the fullest expression of my humanity. That I am human and vulnerable and in owning and processing my own emotions, I am being the best parent I can.

Today, I’ve made space to work with the emotions and beliefs that experience unlocked yesterday. It broke a pattern of behaviour and helped me to understand anger, and anger through the generations. It’s been an uncomfortable and difficult day to say the least. But it feels like a thunderstorm giving way to steady rain before the sun peaks out and a rainbow emerges.

There’s still more work to do, so I sit, and tune into my body, noting what’s arising. I know there’s a pot of gold at the end of it – a pot of insight and understanding and a-ha! moments.

That’s what makes the process worth it.

Emotions hold stories – not the stories of the mind, designed to keep us safe, secure and pain free – but stories of the heart. Emotions tell us what we truly feel about situations, they tell us where to go and where not to go. They tell us of the pain we’re hiding from ourselves and the truths we dare not admit.

But to know these things, to hear the quiet whisperings of your heart and your truth, you have to feel. Under the anger, I feel pain. Under the pain, I feel vulnerable, under the vulnerability I feel alive. I feel alive.

When you stop to feel what you’re feeling, those difficult and uncomfortable emotions, what do you feel?

Underneath that? What do you feel?

Deeper still. What’s underneath that?