You are here: Home / Yoga Articles / Awakening • Creating a More Beautiful World / Musings from the Mat / How identifying with NOT being something also causes great misery 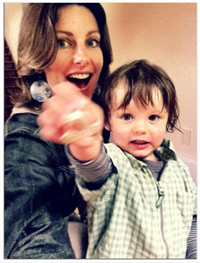 Avoiding motherhood – causes misery when one is actually a mother

It’s 7am and I’ve been up for half an hour. Child-free time and totally blissful. Made even more so because since I returned from my book tour I’ve had no childcare at all.

When my lovely Porse childcare woman told me she was stopping work to have a second child, I could feel part of me wanting to panic.

“No, you can’t! I need childcare. I’m a single mum with a start-up business who’s just written a book! What am I going to do?”

After all, I live in Glenorchy, population 400, this is – or was – the only childcare option in town. There is nothing else.

I noted the drama, and deliberately took time instead to let go of the stories of the mind and feel into the experience. What I discovered was a small voice inside saying:

This is an opportunity.

Now I know what that small voice meant.

Hitting the road for four weeks with a child in tow was an exhausting experience.

It brought up all kinds of feelings and issues around motherhood and parenting and working.

By the end of it, I realised I was living an illusion. I couldn’t do it all. I couldn’t take care of my child full-time, and work on a home business, and take care of myself. I’d been sacrificing myself for months and I’d used up all of my reserves, which was affecting the way I was parenting.

Coming back to GY with no childcare in sight I realised that only choiceI could make was to give it all up. To totally surrender to what was and simply be a full-time Mum.

Difficult for someone who’s spent the last three years avoiding that reality. Hell, two weeks after Samuel was born I was busy re-branding my website from PranaflowNZ into The Yoga Lunchbox. Other mothers were awed and asked how I managed to do it all.

There was nothing to be awed at – it’s the result of denying an aspect of Self, of avoiding something – of avoiding motherhood. I’ve had endless energy available to avoid that.

I knew I had to look at motherhood and working and guilt, and stop avoiding the whole shebang.

So I stayed the process, and got to the point where I knew I had to give up work – or at least, working as I have been.

My child is three and a half – there’s only a year and a half before he starts school. He’ll never be this young again and time moves fast. If I could get over my ideas and beliefs around motherhood, I could just relax and enjoy hanging out with him. I could be a better mother.

So that’s what I’ve done.

I’ve tossed it all in.

No more working 30+ hours on this website and my book and teaching yoga and and and… Instead, I parent.

And half an hour of work maximum when my son goes to bed, and maybe an hour at most during the day when he’s playing. Things like packaging up books to post off and scheduling articles. Only the crucial things. I’m getting good at saying no, and I’ve reduced the number of articles I’m publishing on the website from three to two a week.

I am now a mother. Or at least, I am now playing the role of mother to my fullest capability.

And it doesn’t suck.

This fear I’ve always had of dropping into motherhood... of losing myself, of being bored, or not existing, or something… That fear? Disappeared completely.

I can see too how the article I wrote a month or so ago called I’m only woman when there should be man too was a desperate attempt to hold on to the status quo – which wasn’t working – by fixing it. I was feeling that misery and depression and frantically looked around outside of myself for something that could make it go away – and fixated in this case on a man.

A-ha! If I wasn’t a single parent, I wouldn’t feel like this. I need a man!

Folly. Pure folly. Because I am a single parent and I don’t have a man right now. Fixating on something outside of myself to make the situation different is a subtle way of avoiding the truth of the moment. It took another four weeks or so to dive deeper into that truth and understand.

But I get it now.

And I’m over it. I don’t care anymore – about mothering or not mothering. Life is what it is. I’m called to mother at this time. It’s only ever my ideas and beliefs creating drama and angst around it. I’ve let go.

All the while finding ways to still write – like getting up early and straight on to the computer. Because I enjoy writing, and I enjoy writing in peace.

I feel free. Liberated. In the moment. And joyous.

Which is exactly the energy I’m able to bring into my parenting… minus the stress and angst caused by trying to do it all. Makes mothering way more fun and rewarding because I have more to give to it.