You are here: Home / ARCHIVE / Meditation Practices / How does Gangaji describe the practice of enquiry? 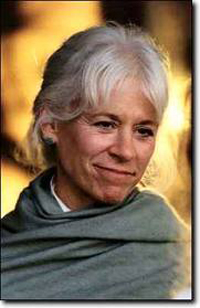 The path of direct enquiry is the lineage of Ramana Maharshi and what he offered as a path to his own spiritual self-realisation.

It is what Papaji taught, and what Gangaji now teaches.

Ramana once defined the practice of enquiry by starting with the question: Who Am I ?

For all thoughts the source is the ‘I’ thought.

If thoughts arise, without trying to complete them, enquire; to whom did this thought arise. What does it matter how many thoughts arise?

As each thought arises, be watchful and ask to whom is this thought occurring. The answer will be ‘to me’.

If you enquire ‘Who am I?’ the mind will return to its source (or where it issued from).

The thought which arose will also submerge.

As you practice like this more and more, the power of the mind to remain as its source is increased.

For myself, I find Ramana’s word’s a little too distilled; like I’m trying to understand a doctor of physics, when really I need a year 12 science teacher. A teacher who is experienced and learned at a doctorate level, but carries metaphors back to her students, free of jargon.

Gangaji communicates in the language of her audience. I’ve come here to speak your language she says.

So I will use her words.

Often a spiritual teaching can become a dogmatic model, creating its own mental gymnastics. Gangaji was clear in pointing out;

Enquiry is not a particular sentence or a special question, but the radical, complete, naked truth telling. This is very simple. But often not easy.

Naked truth telling doesn’t sound like it is for the faint hearted. I would have to agree with Gangaji when she says;

It is the most radical, more intimate, most exposed, the most naked moment of willingness to discover.

Because as humans we are taught to lie.

We are taught to stack lie upon lie upon lie. Often for our own protection; for survival. For connection. Until we are waded with a world of lies and we don’t know what the truth is… but, says Gangaji with a smile, we suspect it is not good news.

And if I am ugly, unlovable, worthless, then there will be no one to help me survive. And as social animals we need each other to survive. Gangaji pauses; so these fears are translated as death.

We learn to avoid the truth by practicing who we think we should be. Should’s that make us more agreeable, more lovable, more… more… more…

Then we get burnt out by the energy it takes to be someone we think we should be. This can become an important cross road.

Because it is where we can begin to tell the truth.

As I sat in Satsang with her, I listened to Gangaji’s personal discovery into truth. She told the story as any human being would tell the story (what follows is all Gangaji’s words):

Growing up, I wasn’t allowed to express what I was feeling.

I experienced an uncontrolled rawness of being that had no permission to be in the world.

I was growing wary of the strategies I employed to please the world. There was a wariness with acting myself.

I was finally willing to being myself.

To express or not to express

At first I thought that to be myself meant to express whatever I was feeling, I had suppressed what I had felt to be socialized, so felt that at a certain stage – to be truthful – I had to express what I was feeling. I soon realized that was a superficial understanding; it really was just an expression of expression. It was still not the truth.

The truth is under both repression and expression.

But the truth lies under that anger.

Enquiry is an invitation to discover how you are lying to yourself and an opportunity to discover the truth. It does not have anything to do with repressing or expressing.

It is a discovery of what IS the truth. Has always been the truth.

My teacher described the truth as that which does not come and go. Anything that comes and goes is not the final truth.

OR we OPEN to all of that.

Open our minds to whatever we are experiencing in any particular moment, not as a should, but as a possibility to enquire.

When we truly enquire in that way, with our full intention, we discover the truth

The truth is who you are.

You discover that it is YOU as the truth, as the ground of this person, this body, this emotions, this circumstance that appears and disappears again.

You discover that you are limitless.

That you are boundless.

And conscious of your limitless – and in that – overflowing in the fullness of your being.

But you recongise yourself as the truth. And in that recognition you then have an essential choice to live from the truth rather than any notion of repression or expression.

To be the living truth.

The point of enquiry is to discover the truth

And it may be a painful discovery initially.

So if we have hidden from ourselves that we are essentially unlovable, and worthless, and useless, then as we begin to uncover, as we begin to release the strategies of being worth something and lovable and useful, it is a great humbling, often painful humbling to open to this truth of our selves.

And our willingness to open to whatever pain, without having to have pleasure… we discover what is free regardless of pain. It doesn’t need pleasure for its journey of being

So pleasure and pain are not the issues.

Just like expression and repression are not the issues.

The issue is truth.

And that is what enquiry is.

For myself, I find Ramana’s word’s a little too distilled; like I’m trying to understand a doctor of physics, when really I need a year 12 science teacher. A teacher who is experienced and learned at a doctorate level, but carries metaphors back to her students, free of jargon. Gangaji communicates in the language of her audience. I’ve come here to speak your language she says.

So I will use her words.