You are here: Home / Yoga Articles / Starting • The Foundations of Yoga / Going to Class / Forrest for the trees – no bullshit, just yoga 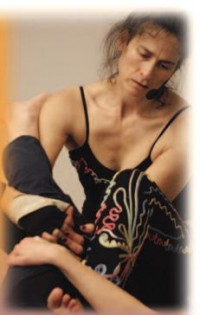 The planted seed of a fruitful vine is a memorable moment.

For me, it was hungrily reading through old issues of Yoga Journal on the second floor of the Wellington library.

After starting to feel yoga as a lifestyle decision, not just an exercise regime, I wanted to learn everything I could.

My body still bore the inflexibility and weakness of someone brand new to the practice, but my soul had expanded immediately.

In the haze of too much information (you know… when you’re on to something, you feel it in your bones, but there’s just so much to take in that you just can’t stop yourself), I consumed even more.

And then I saw her.

An olive-skinned woman with a dark, long braid standing on her hands and touching her toes on her head. Even from the pages of a magazine, I could feel her intensity and life force.

It was a simple advertisement, maybe 4 X 2 inches or something like that. There must have had a web link, maybe “Ana Forrest” or “Forrest Yoga,” something to tie it all together. I don’t really remember. But that picture, that picture of grace, hardship, challenge and triumph…

A picture that said

I WALK THE WALK, I don’t spout scriptures and intentions from atop a throne made of playing cards.

That picture got to me. It flooded me with awe, and curiosity and just the spiciest little sprinkle of fear. I knew that it would impact my life in a great way.

All of a sudden it’s four years late and, as time is wont to initiate, my life has moved. Moving in, new job, marriage, promotion, moving out of country, year-long jaunt around the world, new country, new city, misery, listlessness, doubt and then…

It would be trite, not to mention untrue, to say that things turned around instantly when I discovered Kula Movement yoga studio in Seattle’s celebrated Ballard neighborhood. I can say with 100% honesty that I felt a whole lot better after my first practice at the studio.

A few things made the Forrest Yoga practice different from anything I’d tried before: my breath moved into tight spots more supportively, I felt the adjustments more deeply and, for the first time since starting the practice of yoga, I had zero lower back pain before slipping into savasana.

Incidentally, it was the deepest savasana I’ve ever fallen into. Ever.

I’ve talked to people about their yogic journeys and how certain styles of yoga “felt right,” but this was the first time I felt it. That practice was the key opening a door to Forrest Yoga in my life. I began to learn more about Ana Forrest the woman by reading her book Fierce Medicine.

Her unusually difficult life experiences shaped not only who she became, but her legacy. I was impressed by the way she dealt with life. She’d been abused, taken advantage of, hurt, shattered.

She even tried to commit suicide at one point and was fucking furious to learn that she’d failed when she came-to with a mouthful of gravel after jumping from a cliff.

After all that, she wanted to offer her gift of healing so that it could shape the world.

I loved how honest she was, how averse to sugar-coating the truth. Becoming part of this practice came at a time when I’m more interested than ever in being real. I’m ready to own my truth, my beauty… and my pathological barriers.

Forrest Yoga offers movement toward and out of the barriers; tangible techniques to move through the blocked energy to live with greater clarity, eventually becoming directly aligned with original Source (though I suspect Ana would put it less esoterically).

Last weekend offered me the opportunity to experience that movement straight from the source – Ana herself. She had us lie with rolled-up yoga mats pushing against internal organs to literally “loosen up the shit” that impedes clarity of thought.

She led rounds of fierce Lion’s Breath to release pent-up energy that no longer served any constructive purpose. We were told that Embryo (Child’s Pose with arms resting along torso) was not an option, the energy must keep moving. After Practice One I felt relief as if I’d spent hours in cathartic sobs, though not a single tear was shed.

You’d think after all this catharsis I’d be more prepared for my flight from Seattle to Denver tomorrow at 9:00 AM; the flight that begins an immense journey leading to an RYT-200 (Registered Yoga Teacher 200 Hour) acronym following my email signatures.

But I feel unprepared. Scared. Unworthy and indulgent.

I’ll be on that flight anyway. And I’ll show up at six in the morning EVERY DAY FOR A MONTH to meditate and immerse. To chant and grow. To share and discover.

Please wish me luck, mindful reader, and send me loving energy. I’m sure to feel it and I will appreciate it.

When I get back in April I’ll fill you in on all that I’ve learned so that we can share in all parts of this journey. Y’know, the big one. Life.

In the meantime, find yourself some fucking fury to be where your feet are now and feel where they authentically lead you next. Energy moves.

Stay tuned for Seka’s next article, when she’s finished her one month intensive with Ana Forrest.