You are here: Home / Yoga Articles / Awakening • Creating a More Beautiful World / The Process of Kundalini / What if Enlightenment was just Dropping into Total Ordinariness. What then? 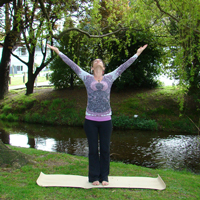 Waiting for imminent enlightenment, damn it!

It’s strange to find myself free of ambition.

It’s been a slow change, but now it’s happened completely, it feels a bit weird.

It leaves gaps in conversations, like when everyone is talking about some TV programme you haven’t seen and they’re all wrapped up in the drama of it, but you haven’t been pulled into it so your smile is merely polite with a tinge of enjoyment or irritation at their enthusiasm.

Ambition is just one story that has fallen away, not necessary at present, although there are plenty more stories I’m currently having a love affair with.

Come, cosy up around an imagined campfire, and listen as I weave a much-fondled story; one about looking for inner treasure and finding it never existed.

In the middle of what I term a Kundalini awakening I flew to England for my brother’s wedding.  I was, at that time, mediating every day on my spine – in particular Manipura –the sun and power centre, in a vigorous and ambitious way.

I intuited that something very important would happen to me in England.  I wandered around in ancient Oak forests, sang to the trees, lay in the grass and was wrapped in a glorious sense of calm and deliciousness.  I was the main character in my story of ‘Beautiful (and Inevitable) Awakening’.

Then, as we like to say in stories, one day, it happened.

I knew without a doubt what it would feel like if I dropped stories altogether, permanently, and was simply present.

My first and strongest reaction was fear – it felt very strange to not value interpretation, to not process.  How weird to not judge.  For example, that tree was no longer glorious or threatened or a living being or in the way of the sun.

I was curious, but could feel how deeply I loved the interpretation, the story, the angle of looking at something and seeing it – the only way to say it – as my kind of drama.  My creativity was invested in storytelling, and creativity fuels life, or so I felt deeply.

Could I let go of the story of ‘Beautiful (and inevitable) Awakening’?  They say the truth will set you free, but it’s hard to want to be free from something so seemingly necessary – even once you see it as nonsense.  And who says sense is so special?

I let the ordinariness go and turned deliberately away from it, and continued my meditation and yoga practice and enjoyed the various sensations of expansion and opening and floating that seemed like signs I was on the Right Track.

However, once seen, it is hard to ‘unsee’ something, and of course, that was the momentous thing that touched me in England – not another expected bolt of spiritual high, but the first tugging away at my unconscious dependence on story and the accompanying certainty that ordinariness could be rather dull.

Not much later, in the middle of a sunny morning meditation in an English field, I also ‘knew’ my ego was as much God’s creation as any other part of me and saw, for the first time, the magnificent stories we roll out continuously – all of us- each one individual and creative and musical and I loved them all, with my whole being.

I knew then, through and through, that we were all the same.

Judgement of how each ego-story was created was about personal taste (i.e. the preference of my inner fabulous fabrication) and there was no such thing as ‘better than’ and no ‘worse than’.

We were a collective exploring every possible possibility and my aversion to pain wouldn’t ever be enough to stop that tidal wave of creative force seeking it’s way into every nook and cranny of potential.

After getting seriously ill and having to change my life – including an involuntary release of yoga and meditation, I was shaken back to Earth for a much-needed re-grounding.  I saw my spiritual ambition for what it was – an illusion I was holding in order to avoid just being me, in a body, here on Earth surrounded by other embodied, yet equally ordinary, wonders.

For a while I believed I had to stop loving stories in order to be free of the constant shimmy of illusion – as now “Truth” with it’s capital “T” had become my main story.  (Ah, love affairs…)

But one day, sitting under a tree and crying out to know what the ‘right’ thing to do was, Mama Gaia told me that the only way to be free is to love what is in you, around you, right under your nose.

So now I’m embracing stories again, embracing my love of story – following the knowing fear in my heart, that self-love that points out not what I need to avoid, cut out, get rid of, but what needs space and love and positive attention.

And like all good stories I have every character of every given moment inside of me.

For example look at the “The Lorax”.  This little gem could be the sum-up of our collective world story of ‘Global Warming’.  And I’m the Lorax (stop the progress!) and the Onceler (But everyone needs a thneed!  And it’s organic and handmade and natural and creative…) and the creatures who have to flee the smog and gunk and biggering and the wee hero who will plant the last Truffler seed and bring back the ecosystem.

I love feeling all those characters inside myself.  I understand the perspective of each one.  And now, often, I’m aware that every interaction with others is like that – as it unfolds I become all parts of it.

I used to think I needed to change in order to ‘get better’, in order to transcend the madness of this world.  Now I know I AM change.  I’m never the same, not for a single second do I stay the same, and that urge in me to ‘change’ is actually my slower interpretation mode saying in panic:

‘Hang the hell on!  I can’t keep up!  Maybe if I list in my head or on paper what is happening, I can at least pretend I’m a stationary being that only gets somewhere by EFFORT.  Phew, if I believe that, then I can pretend I’m in control of the change rather than the more obvious possibility that I’m a mystery of constant transformation with no real clue about the true nature of anything hurtling towards death.”

Even without ambition, I still feel sad and disappointed and frustrated as well as contented and happy and occasionally blazing – but currently these feelings are part of my day, rather than motivation to find another way to do things.

I do often feel like I’m being shadowed by a great Nothing – with a large potential of everlasting dullness – just waiting until I’m tired of playing storytime anymore.

And yes, any spiritual teacher worth his salt hints that dropping into the Nothing will bring the greatest goodies of all – but my whole being must want this for it to be real and my ambition is no longer there trying to shovel the rest of me forcibly into the yawning doubt.

The simplicity of Just this, Just this – not whispered by angels with strawberry breath wrapping me in the security of all-knowingness, but made up of morning breath, ordinary emotions, a turning over of ordinary everyday thoughts, an ordinary body with it’s own weather.

The poetry of more dishes and shared laughter and living in a community of people in their own rhythm of up and down, inward and outward, searching and contentedness.

And how do I know I’m on the right track?

There is no such thing.

Osho on Ordinariness, from the Osho Tarot Deck: 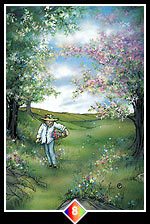 This figure walking in nature shows us that beauty can be found in the simple, ordinary things of life. We so easily take this beautiful world we live in for granted. Cleaning the house, tending the garden, cooking a meal–the most mundane tasks take on a sacred quality when they are performed with your total involvement, with love, and for their own sake, without thought of recognition or reward.

You are facing a time now when this easy, natural and utterly ordinary approach to the situations you encounter will bring far better results than any attempt on your part to be brilliant, clever, or otherwise extra-ordinary.

Forget all about making headlines by inventing the latest widget, or dazzling your friends and colleagues with your unique star quality. The special gift you have to offer now is presented best by just taking things easily and simply, one step at a time. 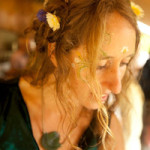 Emma lives with her husband and son at Tui, an intentional community just outside of Takaka.

“As always, this story is an invitation.  I’d love to hear your stories, your reaction, your worldview.  Talking stick, anyone?”