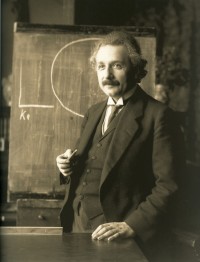 What has the most influential scientist of the 20th century got to do with yoga?

Albert Einstein, the German physicist who revolutionized scientific thought, developed the Theory of Relativity and opened the gateway for the creation of the atomic bomb, remains prolifically quoted and what he says totally speaks to my yogic psyche.

When I think of Albert Einstein I think of crazy hair, a towering intellect and wise words.

Many of those wise words sound to me like they are from an ancient text or the words of a mystic.

Now if you knew my history as an academic and scientist you may think there was a certain irony in my curiosity about the link between science and yoga.

I never ever “got” science at school. In fact it scared me.

I scraped through and then dumped it for the love of the humanities as soon as I could. In fact until my most recent A&P course, which along with my yoga, inspired objectivity, I would almost break into a cold sweat at the thought of it.

I’m totally fine with the mysticism of yoga.

I explore what comes into my field of awareness and what resonates with me.

Trying teachings out in the test tube of my body, layers and life have been all the science I’ve needed. In my mind the results totally speak for themselves and I feel truly honored to reap the benefits of some of this incredible ancient knowledge.

I do however have a niggling feeling that my admiration of Einstein’s words may carry a shading of validation that such a great and revered scientist sounds so like some of my most favorite teachers and yoga texts.

The link between science and yoga is a very old and hotly debated one.

The ancient sages treated their explorations as science, and many of their discoveries have become verified and accepted in mainstream science. Modern day scientists have also verified and acclaimed many extraordinary feats by yogis.

The “Father of Modern Day Yoga” Krishnamacharya, is reported finding the “much marveled at demonstration” of a yogi stopping his heartbeat “rather bothersome” when a French medical team verified this on him in 1939 and 1940. He only participated “to validate yoga in the eyes of the skeptical scientific world”. 1

All religions, arts and sciences are branches of the same tree

Science without religion is lame. Religion without science is blind.

From these non scientific eyes it seems like (pardon the pun) “a match made in heaven”.

When I sat down to ponder further why Einstein words provided yogic inspiration for me I started to think of all the different doors leading to the same truth.

Einstein’s work to me seems to be synonymous with that of Jnana yoga – the “path of knowledge”.

According to Vedic knowledge Jnana Yoga is one of the four main forms of yoga used to realise supreme reality. Jnana looks at the truth of who we are and what we are experiencing, and Einstein’s words have provided keys for me to unlock understanding.

Perhaps his courage to pursue truth and his conviction to speak it has been one of the strong catalysts in the marriage of ancient wisdom with modern day science.

Here’s a few of my current Einstein favorites:

If you are still reading then here comes the heart starter.

Apparently this vegetarian savant with the scientifically proven “special brain”, who said he thought in pictures and not words, also apparently stated:

I never said half the crap people said I did.

Now I really love him.

Take Buddha’s challenge of not believing anything just because you are told this and work it out for yourself.

You have all the resources at your fingertips and the entrance door within.

Yours in blissful exploration.

PS: Just in case you a quote junkie like me:

The most beautiful thing we can experience is the mysterious. It is the source of all true art and science. He to whom the emotion is a stranger, who can no longer pause to wonder and stand wrapped in awe, is as good as dead —his eyes are closed. The insight into the mystery of life, coupled though it be with fear, has also given rise to religion.

To know what is impenetrable to us really exists, manifesting itself as the highest wisdom and the most radiant beauty, which our dull faculties can comprehend only in their most primitive forms—this knowledge, this feeling is at the center of true religiousness. 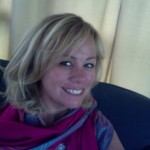 Kate McLeay has recently returned to live in New Zealand with her family after a decade living and working in Uganda, East Africa. She is has had a varied careers ranging from school principal, humanitarian worker, massage therapist, dog walker and sandwich maker.

Kate is a self professed Yoga tramp and quote junky who currently teaches Vinyasa classes and private lessons in Havelock North, Hawkes Bay, New Zealand. You can find her on her website Flow Yoga.