You are here: Home / Yoga Articles / Awakening • Creating a More Beautiful World / Musings from the Mat / Dude, Love is the Guru 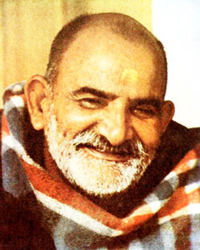 Back at the start of last year I wrote a couple of posts be-moaning my lack of connection to a Real Yoga Teacher and a Guru.

This week I’ve been reading a most excellent book by Ram Dass (he of Be Here Now) called Be Love Now.

And lo & behold, wouldn’t you know, it’s answered all of my questions about finding a guru, what a guru is, and the relationship we have with a guru.

I’m stoked, to say the least.

Ram Dass was once a Harvard Professor, and was best buddies with Timothy Leary. Together they did a bunch of acid trips, and Richard Alpert (as Ram was known then) headed off to India to find someone who could explain the various types of conscious awareness he’d encountered in his acid trips.

What he found was his guru, Neem Karoli Baba (Maharaj-ji), sitting on the side of a hill, wrapped in a blanket. Says Ram Dass of his experience:

What followed was the kind of opening that can only be performed by a true guru who knows the precise moment the nut is ripe to be cracked open with a sharp single tap.

Maharaj-ji began telling me things about my previous night under the stars that he couldn’t possibly know. Then he said “Spleen!” in plain English, which is what my mother died of, and my unreleased emotions cascaded with the impossible fact that this baba in the Himalayas knew every detail about my mother.

Something in me shattered, and I began to sob. I was flooded with grief, and relief, and the immensity of travelling halfway around the world to find this loving old man in a blanket who knew.

At that point, Richard completely surrendered to letting Maharaj-ji run his life – tell him what to do and where to go and how long to do it. He stayed in India for six months, meditating, learning yoga and pranayama, and just going inwards – all under the direction of Maharaj-ji. And then Maharaj-ji sent him back to the States and said he should stay for two years. He also gave a blessing for Ram’s book. Says Ram Dass:

I said “What book?” I had no idea what Maharaj-ji was talking about.

That book was Be Here Now, which became a seminal spiritual text of the ’60s and launched Ram Dass as a spiritual teacher in the West.

Now, over thirty years later, he’s published another book (there’s been a few in  between too) called Be Love Now. In it, Ram goes into great detail about the nature of the Guru, and the relationship between the student and the Guru. Maharaj-ji has since died, but remains Ram’s guru.

And therein lies the truly fascinating thing about gurus – they don’t need to be alive, nor exist on the physical plane. You may never met your guru in real life per se… but it doesn’t mean you don’t have one.

Finding a guru is really an oxymoron. It doesn’t matter whether you know your guru. Your guru knows you.

Most of us aren’t ready for that kind of opening. We may meet but not recognise our Guru. The guru allows us to come and go, knowing that sooner or later, in this life or in another we will meet when the moment for transformation is ripe.

Ram goes on to illustrate his point by sharing stories about the hundreds of people who would come and meet with Maharaji-Ji, and the few that would truly “see” him, emphasizing that the guru manifests when the devotee is ready.

Now I’ve heard all this before, but somehow, reading it here and now it’s permeated. I feel a softening and relaxing. An understanding that’s seeping into my bones as I realise having a guru doesn’t matter and I don’t have to do anything to find one.

But what’s even cooler is how Ran Dass makes clear that the Guru is about Love. Real Love. The unconditional kind of Love that envelopes everything and is everything.

To love God or the Guru is to let go of everything that separates you from the Beloved. This is the essence of devotional surrender and renunciation. …Maharaji-ji’s love touches love in me, and I become that love.

In this loving awareness of each moment there is also surrender, surrender to the guru, to the moment, to your soul. There is only the heart and the love that consumes the lover who becomes the Beloved. Love is a state of being, not a trip from here to there.

And that’s what’s really tweaked for me.

Love is a state of being.

In the past, I’ve sought love in relationship. And I’ve found it, over and over again. But every time the relationship ended, so did the love. And so in order to find Love again, I needed to find another relationship.

This time, after ending my relationship in December 2011, I found Love within and discovered it was possible to be In Love without any external object to focus that Love on… what a revelation!

It began with a conscious effort to love myself – to treat myself as a Beloved at all times. To take care of myself the way I’d always looked to be taken care of – sometimes this was as simple as feeding myself nourishing food by taking the time to cook for myself.

Somehow, this experience of being Love of the last eight months, and Ram Dass’s words have brought this home to me…

Love is the Guru.

That’s why we need Gurus – to show us Love, so we can become Love. Because there is nothing else – all else flows from Love.

Surrendering to the guru or the Beloved doesn’t mean giving power to another human being – it’s letting go of the stuff that keeps you separate. Each time you surrender, it leads you further in, deeper into yourself. Giving up things is incredibly easy in the presence of love.

Knowing this has given me a place to be here and now.

It’s reminded me that the longest and most arduous journey that any of us ever takes is the one from the mind to the heart.

That’s the only journey I need to take, and I can take it in every moment.

There’s a mantra that Ram speaks of, it’s simple, and in English, and I’ve been using it every day.