You are here: Home / Yoga Articles / Awakening • Creating a More Beautiful World / Musings from the Mat / Breaking free and living life via inspiration – the yogic way 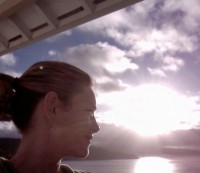 Over the last couple of weeks, I’ve been musing about the nature of reality, and life, inspired by Steve Pavlina’s latest thirty day trial.

I’ve written about Steve before – he’s a blogger and personal development guru I much admire. From possible prison and definite bankruptcy, he’s risen to become the most successful blogger in America, a book author, and organizer and creator of the Conscious Growth Workshops.

Life is one giant experiment to Steve – he’s always playing around with how to make it work best, finding new ways to live more authentically, with more joy, passion and compassion.

I’ve always thought of Steve as a modern day yogi, even though he doesn’t practice yoga (much – he’s been doing a bit of Bikram and he does meditate) as such.

His latest thirty day trial revolves around living purely by inspiration… as a self-employed man with few commitments, it’s something Steve’s able to easily play with. In each moment, as he’s inspired to do something, he does it, for as long as that inspirational wave lasts.

We’ve all had that experience of having a random thought ‘pop’ into our mind, and we think – I must do that! But we’re so busy in the middle of our days that the thought gets mentally filed away, or written down on our to do list. By the time that we get around to it – if we ever do – the energy that originally fired us up with enthusiasm has long dissipated. Or we’ve had second thoughts and rationalized ourselves out of the inspiration we’d had in the first place.

Steve’s ditching all of that putting off until there’s time or thinking about whether or not something’s a good idea. He’s just going for it…

To me, living in this way harks back to my years of overseas travel. I spent eight or nine years globe-trotting, living pretty much on whim, and I had an awesome time. I felt completely free to do whatever I felt like doing.

Mexico for nine weeks? Sure why not, let’s just book a return ticket and see where it takes us. An invite to Maui? Sure, I’ll come and stay, why not? A job at the most happening apres ski bar in Canada, count me in!

Of course, without a solid understanding of who I was, or a grounded, open heart… this way of living tended towards hedonism and came with a harsh cost. Back then, I was living completely out of ego with a lot of unconscious behaviour going on, combine that with inspired living and you’ve got a recipe for implosion.

Despite the implosion of my old self, I’m beginning to have a deeper appreciation for the power of living in the moment, of being open to whatever arises, to following one’s intuition. I may have been coming from the ego, but damn if I didn’t have a fine old time.

Now, back in New Zealand, in a committed relationship, with a young baby and a 7 year old step-daughter, living on whim is far more difficult. Plus it was hard not to equate the end of my overseas adventure – psychosis, broken engagement, financial debt – as the punishment for how I was living.

Deep down, I guess I felt like I was being bad – taking drugs, partying, having fun, living for the moment… It’s taken a few years to understand that what created the implosion of my life wasn’t the way I was living – inspired and free – but the ME at the time who was living it – unconscious and ego-defined.

Now, back living in the town I grew up in, e-meshed again in all the expectations of the proper way to live… it’s hard to break free and be the carefree adventurer again. It’s hard to be bold and just do it.

I’m writing this sitting at the Dunedin airport, on my way to Wellington for four days. On Tuesday, my 35th birthday, Luke (my man) suggested I needed to go to Wellington to reconnect with my friends up there and do some yoga. He reckoned I needed time away just to myself. My first reaction to this suggestion was no way, of course I couldn’t, it would cost too much, I had too much to do, what about Samuel? And besides, I was so behind on work for the website, Global Mala, and a workshop I’ve got coming up… I could’t do it, not without owning a laptop.

So buy a laptop, he said.

I could feel as I listened to Luke that this was important – that what he said was true, that I needed to go and all the objections I were raising were just … irrelevant. We’re in a position at the moment where we can fund a trip like this off the cuff. Luke is more than capable of looking after Samuel. I could go buy a laptop… and damn it if I didn’t know I needed one. The last six months have seen me traveling a lot, to spend time with family, and every time I go away, I find it harder and harder to keep on top of what I want to do with my business – which makes it difficult to grow the business.

Now here I am. Laptop. Airport. Off to Wellington – an international yogi entrepreneur on the go. There’s only one thing missing from this equation, and that’s revenue.

Yep. I may be in business, and I’m LOVING the business I’m in – yoga – to date though, it’s been completely funded by the sale of our house last October. In fact, both Luke and I have been getting businesses off the ground and neither of us has had any income for almost a year. Not working has meant I’ve had the time and energy to pour myself into this website, and into myself and my family. It’s been an absolute treasure of a time…. yet in the perceived wisdom of our times… crazy.

Most people take the money they make from the sale of their family home and buy another one. They get a job to secure the income needed to pay the mortgage – even if that job isn’t quite what they want to do.

We took the money we made from the sale of our family home and invested in ourselves and our businesses – despite my business having a tricky revenue model. How does one make money off a website when all the content is free?

There have been moments of scariness for sure. Is this the right thing to do? What if we just run out of money and neither of us has a business generating income and one of us has to find a job? And we no longer have the money for a house deposit. What then?

Ah fuck it. You only live once (that you can recall this time around anyway) and life is for living right? Wait – that’s the bold adventurer voice coming out again from those years overseas… She is still in there after all.

Besides, I have a firm belief that when you create something of value for a large number of people, you can’t help but create wealth for yourself. It might just take longer than you think 😉 I just need to keep trusting the intuition and inspiration that arises, as whether it looks like it or not, I’m banking some serious creative value right now.

And this is one reason why I am so absorbed in Steve’s latest thirty day trial.

He’s living in a way that makes total sense to me – a way of living that I have done in the past and am ready to transition to again.

I believe that when we break out of the boxes we put ourself in… the Must Make Money and Pay the Bills Box, the This Is Who my Parents Wanted Me to Be Box, the I Can’t do That Because Then This Will Happen Box… magic starts to happen. When we let go and let life flow through us, grace starts to pervade us and our lives.

Take a moment just to look at that word – Inspiration. It’s intimately linking to the word breath (inspire, aspire, spirit…). And breath is linked to God. When we live by inspiration, we live by the grace of the Divine. We become a channel for the Divine, for Grace, for God.

And isn’t this what our yoga practice is really all about? Letting go of everything we think we are, releasing all tension, all struggle, all strain, all disease and un-ease and just flowing with breath, with life, with the divine?

Ultimately, Yoga is Self-Realisation. It’s connecting us to our True Self – the Self that will never live inside a box. The Self that can’t make decisions based on the need for security, because to be secure is the same as being all tied up. And who wants to live like that?

Do you really want to be safe?

I’m not sure what this trip to Wellington will yield. I made the decision to go, booked the tickets, and decided to just say Yes to whatever came up along the way – as long as it felt right. I’ve committed to trusting in my feelings – all of them. I’ve learned that feelings of fear and unease don’t always mean – run, run as fast as you can! No, often feelings of fear mean this situation calls for courage, stand tall and walk forth knowing you are never alone. As one of my friends says, if you don’t know what to do or where to go, find the area of most resistance and head in that direction. That’s where the juiciness lies.

I felt that resistance when Luke suggested this trip. The feeling made me interested. I went deeper into it and discovered fear. I’ve let go of everything before in life… and look where it took me. Do I dare let go and Be Bold again? I dared, and I booked the tickets and everything else just fell into place.

I have a ride from the airport, somewhere to stay, and my four days are fast filling up with get-togethers. My challenge, and my intention for these four days, is to stay grounded, with an open heart, and clear vision. From this place of solid, loving, clarity I intend to flow with whatever arises. It’s my way of getting back into the groove of inspired living.

After all, what’s the worst that can happen? I’ve been dumped by my fiance. I’ve been in serious debt. I’ve gone crazy – twice! If I can handle all of those things happening (in the same month!), then I can handle whatever life decides to throw my way – including serious success. Because sometimes, under that resistance, what’s holding us back is not fear of the bad stuff but fear of the good stuff.

And ain’t that just the darnedest thing?