You are here: Home / Yoga Articles / Awakening • Creating a More Beautiful World / Musings from the Mat / Are We Drowning Under a Deluge of Perfect Yoga Images? 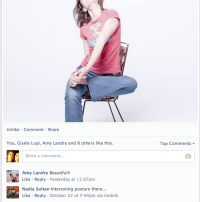 Guess I’m more attached to how people perceive me than I thought.

As many of you know, Wanderlust is coming to New Zealand and Australia next year – first with one-day city-based events, and then in 2015 with the whole four day festival she-bang.

I’m one yoga teacher who’s been selected as a Wanderlust Wayfarer. Wayfarers are a network of teachers who spread the word about Wanderlust to their local communities. As part of my role, I had to send in my bio and a photo of me.

Should be easy right? I’m all over the internet, and there are hundreds of photos of me on this website alone. Yet I found myself procrastinating and resisting.

As always, I noticed myself procrastinating and resisting and wondered, what’s going on here?

I also noticed that I was internally dismissive of some of the other bios and photos going up – my mind was poo-ing this and poo-ing that.

A-ha! A sure sign of an inferiority/I’m not good enough dialogue going on. See it’s one thing to put myself out there through this modest little website, it’s another thing to be prominently associated with the brand-shebang that is Wanderlust.

Ok, I thought, I need to just get over myself, and do it.

So I did. I wrote a bio, and I hummed and ha’ed over the right photo to send in.

See, most of the other other photos I’d see of Wayfarers were gorgeous young women executing challenging postures in stunning locations. I have a couple of those kind of photos. Maybe not as gorgeous, not as challenging and not as stunning, but still something that fit the general template of Wayfarer photos I saw emerging.

But I hesitated. One of the issues we’ve been exploring on The Yoga Lunchbox this year is the impact that yoga media images have on the yoga community and those outside the yoga community. I didn’t want to feed into the whole young-beautiful-flexible machine that predominantly represents yoga in the public eye.

Instead of a typical gorgeous, challenging posture, stunning location photo I choose a modest photo of myself wearing regular clothes, sitting on a chair and practicing yoga.

At least, when the photo was taken, I was in the process of practicing yoga – feeling into my body with my breath and allowing myself to be moved in a way that organically opened me up in the moment.

But still, I was nervous submitting both the bio and the photo. I knew I was choosing a photo that didn’t fit the template – or at least the template as I perceived it.

Later, I saw my bio and photo had been posted on the Wanderlust New Zealand Facebook page, and someone had left a comment.

I read it, and something in my belly turned off and dropped out. I instantly felt the need to defend or explain myself.

And in the moment of all this happening… I noticed this happening. This was my ego at work – anytime you feel the need to defend or explain – it’s ego.

Plus, I noticed how I interpreted the comment. Three small words… and I’d interpreted them in a negative and sarcastic manner. The author could equally have meant them in a Wow! Interesting Posture! How Cool! kind of way.

The meaning or filter I’d put on the comment was creating my internal reality.

Later, in meditation, my mind kept going back to the photo, and the comment, and it kept composing responses. All the while, I’m meant to be meditating. Yep, I’d definitely been triggered. I cared what people thought. I was afraid of what people thought.

Of course, I barely noticed that comment and didn’t allow it to seep into my being.

That comment I just brushed off. Fascinating, to observe all of this going on inside of me. Obviously, I have some inner work to do around being enough as a yoga teacher. Especially as a yoga teacher in the public eye.

This entire incident has made me aware of the subtle pressure I feel to be a certain way in the public arena – to fit in, to show up as a certain way, to project a certain image. This is good. I can deal with this. It’s my area of expertise – dealing with the subtle layers of ego that reveal themselves in our day to day life.

But what about all the other yoga teachers, yoga students and people who aren’t yet into yoga who are bombarded with images of gorgeous young women executing challenging postures in stunning locations?

Before we ponder that – remember, there’s nothing wrong with being young, or gorgeous, or in a challenging posture photographed in a stunning location. Beauty is a wondrous thing.

Many kinds of people practice yoga. And yoga is many kinds of things – including asana, but also meditation, pranayama, kirtan, and karma yoga. Yes, these things are much harder to photograph. And yes, a photo of Child’s pose has a completely different feeling than a photo of Wheel pose.

I get all that. I so get all that. Yet yoga has a certain beauty all of it’s own – and I mean yoga as a state of presence, yoga as stillness, yoga as just being. Yoga as the formless, not the form. It’s bloody hard to photograph. It means taking the time to bring yourself into a state of yoga – the formless – while assuming some kind of form – the posture – and allowing a photo to be taken of you.

It’s much easier to assume the form – posture – and take the photo and say, that’s yoga.

Best of all, it’s an accessible photo and I like to think that anybody could look at that photo, feel the yoga in it, and think, I could do that.

Yes, I could have chosen a photo of myself as a gorgeous young woman executing a challenging posture in a stunning location – and that would have lead to all kinds of likes and comments that would have fed my ego and made me feel good about myself.

Instead, I deliberately choose something that broadens the images we see of yoga, because as a yoga teacher in the public eye, that’s more important to me. And hey, doing that illuminated some areas inside of me that needs work. Even better! It didn’t make me feel good – but it made me feel the truth of myself.

My challenge to other yoga teachers and students in the public eye is to start getting creative about how you photograph yoga.

Don’t go for the easy grab of a difficult pose in a stunning location. Go for the more difficult challenge of capturing the formlessly – capture a feeling sense, a quiet internal moment, a perfectly present simple pose, a moment of calm and peace.

Yes, seeing challenging postures can be inspiring and uplifting, but they can also be intimidating and inaccessible. Does your yoga marketing need images of you in handstand variations? Yes, if you’re teaching a handstand workshop, or an inversions series. No if you’re launching a beginner’s course or yoga for people with bad backs.

What’s your take on this? If you’re a yoga student, are you inspired or intimidated by the proliferation of images of challenging postures gracing the internet? If you’re a teacher, how do you decide what kind of images to use of yourself in media and social media?