You are here: Home / ARCHIVE / Events Archive / An interview with Swami Muktimurti about the power of sound to transform 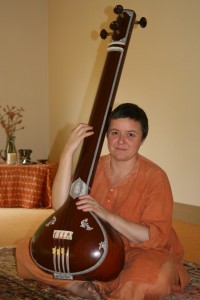 There is a rich Satyananda Yoga tradition in New Zealand, which means we are fortunate to often play host to traveling Satyananda Swamis from around the world.

Next month (March 2010), Anahata Retreat just outside of Nelson is hosting Swami Muktimurti from Mangrove Mountain near Mountain. An expert in Mantra and ancient Sanskrit, she is hosting a nine day/ten night retreat focused on Nada Yoga, or the yoga of sound.

Swami Muktimurti  is well known for her singing.

She has pursued a deep interest in music for the past 30 years, incorporating her background in devotional singing (kirtan, bhajan and stotram), mantra, classical North Indian music and her love of music and chanting in general into an experiential perspective on the practices of Nada Yoga, the yoga of sound.

You’ve been living in Satyananda Yoga ashrams in both Australia and India since the 1970s, how do you end up there?

I had the good fortune to start learning yoga at school. When I was in high school, we were permitted to choose from a variety of different “sports” for our weekly sports day, and one of the options was yoga. So I gave it a try, and liked it very much. Eventually our yoga teacher went to live in India, so I started visiting the ashram at Mangrove Mountain, which was not that far from my home in Australia.

When I finished school, I went to live there permanently, which was in 1978. In the mid-’90s, I had the opportunity to visit our ‘parent’ ashram in India, and in 1996 was transferred there full-time for a period of 10 years. In 2006 I was transferred back to Australia again.

Many people won’t know there is such a thing as the yoga of sound, can you tell us something about Nada Yoga and it’s appeal to you?

Nada yogis consider the entire universe to be made up of vibration – particles vibrating at different frequencies, from the most gross, i.e. physical matter, to the most subtle, i.e. thought and feeling etc.

Only a fairly narrow field of that vibration falls in the auditory range of the human ear – perceptible sound – but that is a starting point for us to use the medium of sound to focus and gradually refine our awareness, with the aim of eventually being able to discern the more subtle levels of vibration.

The retreat you’re leading at Anahata is a 9 day Mantra and Transformation retreat – can mantra really transform us?

In our tradition we are taught that the sole purpose of Mantra practice is to transform the consciousness; that is why we do it.

It has been expressed that Mantra “irons out the wrinkles in the personality”. I think it takes some considerable time for most of us to become “wrinkle-free”, but when one practices mantra regularly, it certainly does become noticeable that there is a greater level of mental and emotional equanimity when dealing with the ups and downs of daily life.

How has the practice of Nada Yoga transformed you?

It is always difficult to talk about changes to one’s own self, but I can say that doing any of these Nada Yoga practices definitely makes me feel better in myself. If I am experiencing stress or a lowness of spirits, and I do some chanting or singing, the stress goes down and the spirits go up!

The retreat is being held during Navarati, what is this and what significance does it have?

In the modern era, Navaratri is observed twice in each year; once during the month of Chaitra (March/April in our calendar), and again in the month of Ashwin (September/October).

In India, these months are at a time of changing seasons, and it is a time set aside in the Indian calendar for practicing sadhana, which means a set period of intensified yoga practices, and traditionally the main part of that sadhana involves chanting the different names and qualities ascribed to Devi, the Divine Mother, and also Rama.

For Hindus, this is also a religious festival, but from the yogic perspective, any deities involved in the chanting material merely represent positive qualities that are inherent within ourselves that we wish to stimulate or awaken.

So Devi symbolizes those qualities of nature, nurture, protection, and unconditional love, while Rama symbolizes integrity and nobility of spirit. In the mythology, Rama won a great battle against terrible demons with the help of Devi, and yogically, this represents our own private battles with our own inner demons.

Traditionally there is often a degree of mild austerity involved with the sadhana – some people fast, etc, and even the act of sticking to a timetable of intense practices for 9 days can be something of an austerity, which helps to focus our awareness and self-observation on the effects of the practices over that time.

It is not designed as an entertainment, although it can also be very enjoyable – there is an extra potency involved in making a conscious commitment to doing something a little more challenging than usual for that finite period of time.

Some people are still cautious – or even suspicious – of chanting. Even an OM before an asana yoga class can be a big deal for some people. Why is this do you think?

I think that many people in our modern Western society have some strong feelings about what they think to be religious ideology. Sometimes it is a reaction against a person’s own religious upbringing, that they may have rejected; sometimes it can be a fear of having another culture’s religious ideology imposed upon them.

Yoga and Hinduism have come from the same culture, so it is not always easy to separate them in the perception of those who are from outside that culture, but for yogis there is really no conflict between chanting and any other ideology. For example, if I were a Christian yogi, and I chanted mantras specific to Krishna, it would not at all mean that I was betraying my own faith to worship some other God. It would simply mean that I was invoking those qualities symbolized by Krishna (or Siva, or Rama, or Devi, etc), within myself, or perhaps recognizing them as something to aspire towards within my own faith, whether it be a theistic or atheistic one.

In yoga, regardless of anybody’s personal ideology, it is recognized that everybody has something that they feel reverence for, whether in the form of a divine entity, or in the form of nature, or music, or art, or even the realization of human potential. The mantras, describing that which we hold in reverence, give us a vehicle for expressing that feeling.

Do you think more people are beginning to embrace yoga beyond the physical?

Yes, definitely. The physical practices of yoga definitely hold importance, and have been widely accepted by now in many cultures, but they are only a fraction of what can be found in yoga. I find that after some time, many people who practice yoga postures want to delve deeper into other forms of yoga, and our society is much more open to some of these other experiences these days.

Each night of the retreat includes a fire ceremony called Havan, can you tell us something about this?

From the yogic perspective, the time when mankind began to deliberately use fire marked an evolutionary leap forward for our species, and the next evolutionary leap occurred when mankind began to cultivate grain. The fire ceremony, (or havan), which involves the offering of substances including grain, connects us with that aspiration towards continuing evolution, both on an individual level, and also a collective, global level.

You’ve led many retreats over the years, what it’s like for you to be guiding people through a potentially life-changing experience?

I am not what I consider to be an expert, but I have lived long enough in ashrams to have had the opportunity to imbibe some things that I can now share with others. So it is a delight for me to be able to participate in such a process in any way.

How does someone know if they’re ready to come on a retreat like this. Do you have to be ‘ready’?

I think it is a simple matter of feeling drawn to trying out the experience – that is all it takes to be ready.

And if you feel ready to experience this retreat, you can book directly through Anahata Retreat: