You are here: Home / Yoga Articles / Deepening • The Yoga of Life / How Yoga Helped Me / How I Practiced Hot Yoga for 100 Days Straight 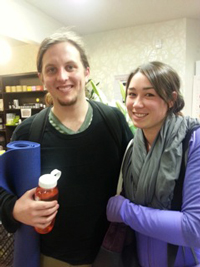 Well it can sound that way on days where I am feeling tight or tired. But for most of the time I’m now content hanging out in Downward Dog and observing how my body and mind adjust to the posture.

If you had said that to me before a few months ago, I would have laughed with a small amount of doubt sitting in the back of my head making itself present.

It’s profound what can and does happen in any Yoga session. But one hundred days of yoga is something else.

Most are aware of the feeling of empowerment or achievement that one gets when applying small amounts of discipline over long periods of time – much like how one degree can make a huge difference to your destination on a twelve hour plane flight.

Yoga, like anything else, is no exception. Although yoga seems to have certain qualities that results in some unusual and unexpected results.

Out of every type of challenge I’ve attempted in my short twenty six years of life, Yoga has probably had the most profound effects.

Never have I gained such insight about my body, my mind and its inner workings in such a short length of time.

I’ll add that 100 days was not the initial goal. There wasn’t even a goal at all. It was initially some kind of self-intervention driven by guilt because the first six months of the year; I had practised yoga very little.

I didn’t let the number itself be the main focus of the challenge. It was simply a way to measure the change that occurred and to act as a marker.

And oh boy, do things change.

What I find the most interesting part of the practice is the process in which Yoga allows change to happen. It seems to act in a very therapeutic fashion and be so well rounded that no individual is immune to its effects.

I will try to describe a few of the things I’ve observed about the practice. What it’s done for me thus far and how it seems to work.

I may get a little poetic so please stay with me if you’re not that way inclined.

Have you ever heard the saying:

This is what Yoga allows.

It’s as if our minds and bodies are a house, but most of us are living on the verandah, and Yoga helps us to realise that there are a bunch of other rooms to explore.

It achieves this realisation by one consciously submitting to the pose and often moving into states where one feels a strong sense of vulnerability.

The gesture of consciously submitting ones self to the pose is but one of three players, for which the breath and flow also have parts. Being conscious or present during breathing and movement unifies all the senses.

During this time the attention becomes so sharp you could almost say it’s one pointed. This is what is known as being present, in the Now.

Being present or, saying yes to the Now, while in the pose allows the change to happen.

It’s as if when one’s attention is in the now, you accept yourself entirely – you’re not judgmental and non attached. You accept your body and allow it to heal through the firm but gentle opening of the posture.

Its not easy sitting in Yogi squat for four minutes and have to accept the inflexibility of one’s hips and be slightly envious of the Yogi next door because they’re far more flexible and make it look easy.

But that’s why we practice.

Through conscious practice one learns to accept oneself, become present; become compassionate for fellow Yogis, as they to are on the same path as you.

Sharing the journey, holding the space in the room, flowing as one with movement and breath like a school of yogi fish.

If you’ve ever tried to practice alone at home it can be quite the mental effort, but in a room of yogis the power of the practice seems to amplify.

When the room is moving as one and breathing as one, the practice almost seems and feels easier. This is but a taste of the joy, and I guess pressure, Yoga teachers feel when teaching a class – to essentially choreograph and guide a room of people, over sixty to ninety minutes, through the heat, and come out of the room feeling blessed out to the point where one feels content with everything the way it is.

A complete hit of compassion, acceptance and bliss that seems to hang around for quite a few hours afterward. But it doesn’t seem to come from outside of oneself. It seems to radiate from within.

It’s as if the practice of Yoga is like wiping the dust of a mirror and we, for a brief period of time, get to see and our true selves.

When practicing daily this feeling begins to bleed into ones life outside the studio.

When tired, sleep. When hungry, eat. When stressed, exercise.

I have no idea how deep this yoga practice goes. But I’m well aware of what the practice has offered to me already through my 100 days of showing up to class.

Because of this I’m making changes to my life to benefit my Yoga practice. Such as diet, sleep, exercise and even beginning to introduce meditation on a regular basis.

To those who are considering Yoga for a daily practice. Or practising every day as a challenge. Be warned.

Practicing Yoga daily will begin to make you feel more you that you ever have felt in your life. Not the idea of you that you hold onto. But the Real You.

I could go further. But instead I will let Mr Alan Watts have the last words. His way of describing the dance of life far exceeds my grasp.