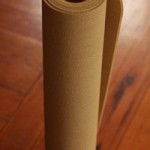 by guest author Laura Cornell This article originally appeared on Green Yoga. We thought it was important enough to re-publish here. When I became a yoga teacher, one of the first things I did was to buy a set of mats for my students. It wasn’t until many years later that I learned that the main ingredient of yoga mats is polyvinyl chloride or PVC, an environmental toxin. PVC is widely considered to be the most toxic plastic. Vinyl chloride, the base ingredient in PVC, is a known … END_OF_DOCUMENT_TOKEN_TO_BE_REPLACED