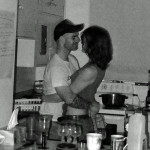 by Kara-Leah Grant, Musings from the Mat Five months ago, I wrote a raw and emotional article called I'm Only Woman When There Should be Man as Well. It was the beginning of me opening up to the possibility of relationship again after being mostly single for over two years, since leaving my son's father. That article sparked the series Men, Lust, Desire, Obsession and Compulsion as I dove head first into my own relationship with men, desire and relationship. With several long-term … END_OF_DOCUMENT_TOKEN_TO_BE_REPLACED