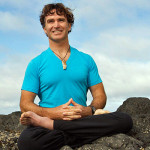 [Editor's Note: This article was originally published February 12, 2014. As Eoin is appearing at Wanderlust NZ & Australia 2015, I've up-cycled it for people to take a second look.] by Kara-Leah Grant It's just one month left before Wanderlust NZ and Australia 2014 unfolds. To whet your appetite, I dragged Eoin Finn away from a beach where he'd been indulging in one of his biggest loves - surfing - and got him to talk about his other biggest love - yoga, including what yoga teachers … END_OF_DOCUMENT_TOKEN_TO_BE_REPLACED