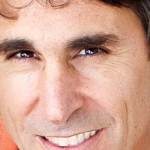 by Kara-Leah Grant An internationally recognised teacher, writer, and entrepreneur with over three decades of experience, Peter Sterios is one interesting guy. He was once a professional rugby player and lived in New Zealand for eight years - An American making a living as a rugby player. He was in New Zealand when he met his yoga teacher Zhandor Remete of Shadow Yoga - a teacher he ended up spending twenty years with before Zhandor cut him off and told him it was time for Peter to go his … END_OF_DOCUMENT_TOKEN_TO_BE_REPLACED