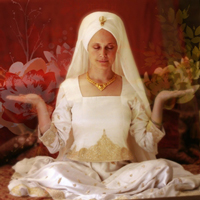 I’ve been putting off writing this review because I’ve got some critical things to say, and I didn’t want to be critical of the wonderful folk behind Yogawoman.

They’ve done a stellar job of telling an important story and bringing awareness of yoga to the masses. Now they’ve released an album to go with the movie.

Who am I to nitpick?

But here at The Yoga Lunchbox, honesty rules. Self-aware, compassionate and mindful honesty that is.

After listening and listening I’ve realised that my perception of the music is mostly about my taste. It’s got nothing to do with the skill and talent of the female artists featured on the Yogawoman Original Motion Picture Soundtrack. They rock at what they do.

My biggest gripe is with the order of the songs – yoga class playlists can be so time-consuming to construct, I was secretly hoping I could play this album for class. Not a chance though.

From Track 1 to 7, the tempo of the album is consistent – slow and cruisy. Then Wah! kick in with Shakti and a fast-paced drum drives the track. We’ve leapt from Savasana-style to Yoga Trance Dance. I find it disconcerting, even though the track itself is great. The style is so different from the rest of the album, it feels out of place.

Track 9 blends nicely into 8 though, taking down the tempo but maintaining the beats. It’s Sharon Gannon with Lokah Samastah and this could easily be played in the background of a funky bar and no-one would bat an eye-lid. I like that kind of yoga music – great beats and mystical all rolled into one.

Given the constraints of working with a soundtrack, I can see why the two fastest tracks have been added at the end of the album.  From that perspective, it makes total sense. From a yoga teacher’s perspective, years of listening to the rhythm and flow of a yoga class playlist have conditioned me to like a certain sequence when it comes to yoga music.

But hey, it’s not a big deal right? This album could still be used for yoga playlists- with some reshuffling of the tracks. And maybe that’s the answer for me. Use the tracks, just move them around to suit my needs.

My favourite track on this album has to be Snatam Kaur with Ong Namo.

It’s the kind of track I love using for my yoga classes, and could easily play every day. I could run it back to back and play it for an hour and love it. That, for me, defines an outstanding track.

However, after the powerhouse start with Snatam Kaur, some of the following tracks lose the magic for me. There’s nothing wrong with them, and if you love female vocalists, you’ll likely love them.

It’s not until Track 6 kicks in with Suzanne Sterling singing Sun’s Orb that I’m again entranced. A delightful 10 minutes long, I’m putting this track into high rotation in my yoga classes too. Track 7 gets a thumbs up too, Shantala singing Hineni.

That makes for three out-standing tracks, plus a few other goodies.

Will I keep listening to this album now that I’ve written my review? Yes.

Will I use come of these tracks in my yoga classes? Yes.

Will I recommend it to friends? Yes, with some explanation.

Should you go out and buy this album? Yes – if you love female vocalists, atmospheric music, music you can practice yoga to, music you can meditate to and music for lullabying children.

You can read more about the artists behind Yogawoman Original Motion Picture Soundtrack here.