You are here: Home / Yoga Articles / Awakening • Creating a More Beautiful World / Musings from the Mat / Wound-Relating: When Relationships Break Us Open and Set Us Free 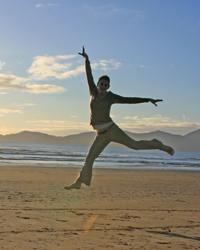 Obviously, much has unfolded, and the strange thing about using my own life to illustrate a process of yoga and self-inquiry is that when I start a story, I feel obligated to finish it. Kind of like Charles Dickens when he was serialising Two Cities… he wouldn’t stop before the end now would he?

However, my stories involve real people, so I’m also mindful of the other folk involved in the stories and allowing enough space to see more clearly what may or may not have been going on.

As I shared briefly at the end of this article on How a Fear of Intimacy was Sabotaging My Intimate Relationships, Leighton and I are no longer together.

Our relationship transitioned from intimate partners to friends in early December, about a week before I left Glenorchy to go and stay with my Dad for a month.

Why? The short answer is that the intense and almost compulsive attraction I’d felt for Leighton completely disappeared. This wasn’t just a physical attraction – more like a pull toward him as a human being. A current sucking me in if you will. It was just… gone. Almost like waking up from a dream.

The longer answer is of course more complex. As Leighton and I had grown closer and stepped further into relationship, the difference in our world views and experience of life became more apparent to me.

In fact, my fear that he wasn’t “spiritual enough” almost saw me end the relationship in October. However, I knew enough not to respond to fears and kept inquiring into my process and as a result uncovered a deep fear of intimacy of my own.

The work that I did around that fear of intimacy, with Leighton’s love and support, helped me release and resolve an old buried childhood wound.

In the wake of that release, the places where Leighton still had work to do became far more apparent to me. He is seven years younger than me, and while he claimed to “have no issues”, I’d been concerned that in fact he just hadn’t yet woken up to any of his issues. Because we all have issues… right?

Being with me began to crack him open and a gulf opened up between us.

I was in one place, and he was in a totally different place. My love and concern for him was still as strong as ever, and we’ve stayed in close contact since early December. But our relating has shifted. I could see our paths diverging.

Needless to say, initially this was difficult for Leighton to grasp. How could it just be what it was? Couldn’t we make it what we wanted?

Well no. You can’t just make something what you want – at least, not without creating a lot of suffering. Things are what they are – including relationships between people. And this relating was over.

It was a similar process to the last three relationships I’ve had. In each one, some major wound has healed and released. In the wake of that, a layer of reality falls away and I wake up a level. From that new level, what I see and perceive is different and while the love and concern remains for the person, there is no impetus toward intimate relating.

A friend of mine calls this “wound-relating”.

Often we get into relationship with people who are shut down in the same way that we’re shut down. We recognise parts of ourselves in them. Over the course of the relationship, there is an opportunity to face and heal that wound. But once it’s done, the very thing that brought you together no longer exists and the relating ends. The relating has served it’s purpose.

Perhaps, if the other person also faces and heals their own wound then the relating may continue. And the work then continues together – a spiritual partnership if you like, where being together helps to bring up your shit and release it.

For Leighton and I, he was at the very beginning of his journey into Self, whereas I’ve been consciously walking this path for nearly a decade now.

When I first met Leighton, I was concerned that perhaps our relationship wouldn’t work long-term because he wasn’t a yogi.

I wasn’t sure if all that stuff would matter… or if I could slowly initiate him into the ways of the yogi… In many ways, I did. He’s now gone off to an ashram to learn more about himself and about yoga. It’s just that he wasn’t my partner on this journey.

Ironically, Leighton’s support and love in helping me to deal with that long-standing intimacy issue means he may have laid the ground work that will finally see me enter into a relationship with a life partner.

Does that person have to be a yogi? I still don’t have a definite answer to that. I’d like to think no, because it narrows the pool of potential partners so much! Realistically, sharing similar world views and similar understandings of relationship and communication is vital for any relationship’s success – no matter what those world views are.

The last article I wrote in this series asked, Can we manifest our way into true love? How about yes! Within three weeks of publication, my relationship with Leighton had ended. Yet I still believe in the title.

I was clear when I began this journey that I was ready to open into a deep and enduring partnership.

My experience with Leighton helped me identify and release a major obstacle to that partnership. It wasn’t, as I thought at the time, the end of the line, but merely another station along the way.

For whatever reason, relationships have taken much practice for me. Every time I experience another one, I learn how to be more honest and more loving and more vulnerable and more open to truth. Each time, the quality and nature of the relationship improves.

But yeah, I’m also soooo ready to move on from this pattern. I’m ready to move past wound-relating and instead move into heart-relating with someone I can go the distance. Someone who understands my world view and the purpose of relationship in waking us up to a truer sense of ourselves. That means they have to be able to see my bullshit and call me on it, while letting me do the same to them.

That last bit is the most crucial.

In several of my relationships, my partner at the time wasn’t ready to hear what I could see, and would deny, fight against or otherwise block my insight and sharing. In essence, they would deny my reality.

Sometimes they would do this in a hurtful, abusive or mean way. This meant that when I was attached to holding on to the relationship, I learned to keep quiet and become passive.

Ironically, acting in this way also meant I was no longer the vibrant energetic me that my partner originally fell in love with… and this pattern ended one of my relationships because of that shift. Since then, I’ve learned that no matter what, I have to speak up. I can’t keep quiet about what I see, even if it means pissing the other person off.

I’ve learned that I can’t deny my reality… which is what it’s all about really!

A major red flag in my relationship with Leighton was that as the relationship went on, I noticed myself becoming more and more passive, and more quiet.

Inquiring into that, I realised I was afraid of his reaction if I spoke up. Again! I thought. I swore I was done with this pattern! Well, maybe not. Childhood patterns of being and communicating are hard to shift, and it takes serious awareness and practice!

All of these experiences though help to clarify exactly what it is I want and need in relationship – plus help me grow and shift in ways that make that kind of relationship more possible.

Each relationship holds so many gifts, and I leave with love for the other person.

But at age 38, with seven long-term relationships under my belt of six months + each… I’m ready to break that pattern too!

I’m ready to connect with someone who I can go the distance with – someone I can grow with along the way.

However I’ve also mellowed… my entire life I’ve felt this ache of compulsion to get into relationship. I used to think it was a failing of mine. Yet I was always happy by myself… despite this intense drive to meet someone.

Now, that drive has completely fallen away. And I realise that all those years when I was beating myself up because I wanted a relationship so badly… it was actually because relationship would be what helped me to heal. I needed relationship to complete work on myself.

That compulsion was a good thing… once I brought full awareness to it and dropped all attachment to staying in relationship.

Now, there’s no compulsion. I am as I am, and I’m perfectly content within that. There’s a sense of spaciousness and ease that I’ve never had as an adult – like I can finally relax knowing that everything is going to be ok.

Yes, you could say I’m free.