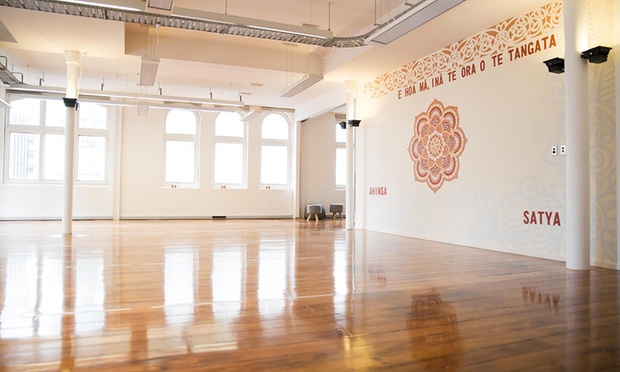 Two new yoga studios, both featuring heat, one with the capacity for 60+ students in class, in a city already bulging at the seams with yoga studios and teachers.

Has the market finally reached saturation? Will Power Living, with the marketing might and operations efficiency of a multinational company, suck the other studios dry?

Only time will tell, of course. Anything else is simply opinion. Which is all this article is – my limited perspective on the recently-opened Wellington Power Living Studio.

I was down in Wellington for the Power Living opening, stoked to support Justine Hamill and Jase Te Patu as a long-held dream came to fruition. Many of the teachers at the new studio were on the Bali Retreat I attended in 2014, doing their 200 HR. Plus head honchos Duncan Peak and Keenan Crisp flew out from Australia, with key administration staff, to support the opening.

I rocked up at about ten minutes to 6pm and saw the painters pulling out the last of the gear as the first guests walked in. The fit out had gone down to the wire, as these things tend to do, but the studio was ready to welcome in a couple hundred guests with wine, beer, bubbles, coconut water, sparkling water, and platters of mostly-vegetarian nibbles.

First impressions? After opening eight other studios, Power Living has the yoga studio business down to a fine art.

The space is incredible – wooden floors, natural light, exposed brick work, high ceilings, colourful mandalas with both Sanskrit and Maori and best of all for a studio with the capacity to pack in the students, flow. You can access either room from two doors, meaning students can flow in one door and out the other.

There’s plenty of space in reception to chill out, either standing or sitting, or browsing the well-stocked boutique. And even on the first day of free classes, when up to 90 students packed into a class and all those students were new so needed to fill in registration forms, the reception handled the flow.

Because there were experienced staff on hand from Sydney who knew the computer systems. Because the operations manual is the size of a phone book (no kidding!). And because operations staff pay close attention to detail. Like the way that Justine emailed out the studio registration form earlier in the week to everyone who had booked into the free classes. I printed my form out at home and filled it in so when I walked into the studio all I had to do was hand it over.

No wasting time clogging up reception filling in a form. That’s smart thinking.

It’s no surprise that Duncan – who has an MBA in Business – was a business consultant in a former life. The Power Living operation is slick.

But that doesn’t mean it’s a capitalist company, and Duncan pointed this out during his Speakeasy. He says the intention of all Power Living Studios is to create houses of healing that support the local yoga community. It’s people before profits. And the best way to do that well is to prosper along the way. That means being smart about the business, and putting the yoga first.

Power Living has had multiple offers from business-minded folk wanting to buy into the business. But as Duncan says, they would want to run it along ‘business lines’, and Power Living is firmly run along people and yoga lines.

Even the rapid expansion of the business – from one studio in 2004 to 9 in 2016 – wasn’t a business plan. It was the natural organic unfolding as teachers within a studio decided they wanted to make a career from yoga and strike out on their own.

Rather than open a separate studio, those teachers asked if they could open a Power Living Studio.

Justine Hamill is a Power Living employee based in New Zealand – she has been running Programmes over here, like teacher training. About three years ago, she asked Duncan if she could open a Wellington Studio. Around the same time, Sydney-based Kiwi Jase Te Patu returned to Power Living from a stint on Lion King and told Duncan he wanted to return home to New Zealand and open a studio.

The timing was right. Two passionate qualified staff members ready to take responsibility for a studio in New Zealand. Wellington was born. The timing was right too. In those three years Wanderlust Great Lake Taupo happened, giving Power Living the perfect opportunity to expand their presence in the New Zealand market. They partnered with Wanderlust, ran a booth, and Duncan and Jase both taught.

This meant that while Justine and Jase searched for the perfect studio venue, the New Zealand Power Living community was being expanded. More New Zealand teachers were graduating from their 200HR program and attending the retreats and 500HR trainings (like myself).

By the time the Power Living studio opened in January this year, there was a local yoga community clamouring for it. People flew in for the opening from all over the country – myself included. And the opening day classes – all free – were packed.

If I was a yoga studio owner in Wellington, would I be concerned about the expansion of the Power Living empire into NZ turf?

The beauty of the Power Living approach is that their focus is on making yoga accessible in the modern world. That means they tend to expand the market wherever they go.

Jase has deep roots in the Les Mills community, and many of his former colleagues rocked up to class on Saturday. Plus Power Living classes are serious sweaty workouts (as well as delivering solid yoga philosophy) so students who see yoga as a workout flock to Power Living. Power Living builds a bridge from the workout world to the yoga world.

If I was a new student contemplating starting yoga, it’s more likely I’d walk into a Power Living studio because they are likely to be more visible in the market. They understand marketing, and they do it well.

However, for some people, there is also something intimidating about the Power Living experience. A friend who went to a couple of classes on Saturday – and she’s been doing yoga for at least six or seven years – said she felt like everyone was so ‘yoga’ and looked really experienced compared to her. She felt a bit ‘uncool’ compared to everyone else.

And yeah, yoga isn’t about being cool, or comparing ourselves to other (something Power Living ingrains into their teaching) however, most of us are still living in playground dynamics of cool/uncool and may find that Power Living is not our scene.

Of all the yoga studios in Wellington, the ones who are most likely to feel the affect of Power living are the heated studios. Because most of the Power Living classes are heated to a comfortable 32 degrees, meaning those classes appeal to those who liked their yoga hot, and those who just like to be warm (like me).

With that heat, but a wider offerings of yoga styles, Power Living could pull over some Hot Yoga devotees or Bikram lovers (especially in the wake of the latest court rulings on Bikram).

If I was a local yoga studio owner, and concerned about the impact of Power Living on my business, I know exactly what I would do though.

I would focus on getting to know my yoga community better, and understanding even more intimately what their needs are. And I wouldn’t be shy about connecting with and networking with the Power Living teachers and staff. Maria, one of the owners of Hot Yoga Wellington has already been doing this. She spoke at Power Living’s recent Burn Bright event in April.

All business fosters when it’s run cooperatively and collectively, studios can work together to grow the market and make sure all members of the yoga community are being served.

We don’t have to buy into the old mentality of win/lose, dog eat dogs anymore. We can choose to play the game of business through the lens of cooperation and community.

I mean, we’re yoga right? Union? Connection? What better place to apply that than in the business of yoga!