You are here: Home / Yoga Articles / Starting • The Foundations of Yoga / Yoga Styles / Why practicing ‘Freedom Yoga’ can work wonders for your practice 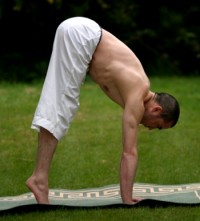 The term ‘Freedom Yoga’ has a very nice ring to it.  I immediately attach the emotion ‘Joy’ to the idea of ‘Freedom’.  Other associated words that come to mind are ‘liberation’ and ‘self-determination’. That last word leads us towards another more weighty word which is ‘responsibility’.

Not deciding in advance what you are going to do, but instead listening inwardly, and then daring to do as you are prompted.

As time has gone by, I’ve come to see this definition more in the spirit of its intent, rather than in the literal interpretation of its words.  As you read on, hopefully you will understand why I’ve come to feel that way.

Before I go any further, I’d like to clarify the agenda of this article.  It is most definitely not about demonstrating the superiority of an improvised practice over a set pattern.  In fact what I would like to achieve with this analysis, is the relationship between the two, and how they actually benefit from each other.

I recently bore witness to a discussion about the pros and cons of both, and it was in reading this discussion that I drew inspiration for writing this piece.  What struck me after reading through what everyone had to say was that there was an implicit and almost uniform belief that ‘Freedom Yoga’ was everything that ‘fixed pattern’ was not.

In doing so, we can then give those ‘objects’ names, and put them into a nice tidy box for future easy reference.  Furthermore, we can analyze them independently of each other, even in spite of the fact that in their natural state, they always work together.  As a fundamental proof, try to imagine Yin without Yang, and vice versa.  The Universe is designed to keep itself in balance, everything I’ve witnessed in my life has lead me to believe this as a basic truth.

Freedom Yoga does not mean Random Yoga.  I doubt even the most staunch improv. Yogi would argue against the benefits of Sun Salutations, and what is a Sun Salutation if not a ‘fixed pattern’?  Granted, an improv Yogi may well construct a custom sun salutation, but if they were to repeat that sequence even more than once, then by definition it has become a ‘fixed pattern’.  This is the perceived difference between a ‘freedom based’ practice and a ‘fixed pattern’ one, and it’s a distinction that is ultimately irrelevant.

This distinction does not preclude ‘fixed pattern’ yoga at all!  The issue here is actually to do with the application of your practice, not the style or label associated with it.

I am a firm believer in the concept of ’emotional intelligence’ and I believe it has a very real role to play in the development and maturity of a person’s yoga practice.

Just like our physical practice, our emotional practice evolves (and grows) at different rates.  Just as certain poses present a physical challenge or blockage, they often present the same on an emotional plane.  Often, the two can be closely connected.  An obvious example is the fear that someone might associate with doing inversions.  But this emotional response is in every pose you do.  It could be the bliss you feel as you sink into a cross-legged forward fold (I sometimes feel like I want to stay there forever!) or the angst you feel as you worry about whether your knees will hold out as you try to open up your hip joints.

These emotional memories will be there for you the next time you repeat your practice.  You have to work with them, accept them into your consciousness, and cultivate them in such a way that they can move through you.  When you confront these emotions within yourself, you slowly come to know yourself better.  Try to fight them, defeat them, or ignore them, and you are simply pulling away from the Source – away from yoga.

As an example, lets look at someone doing the Primary Series in Astanga.  Lets say they have a specific injury to one of their knees which makes any pose that requires significant hip rotation unsafe.  A skilled teacher will guide the student through the ‘at risk’ poses by offering other options and/or skipping them altogether.  As an alternate scenario lets say it is a self-practice and the student has enough emotional intelligence to modify or avoid the risky poses, knowing it is only their ego that tells them they have to do it a certain way (the My Way or the Highway mentality).

In  other words, Freedom Yoga is in fact very much present in this Astanga ‘fixed pattern’ practice. The student modifies or varies the fixed pattern according to the individual needs of their body.

Imagine if they didn’t!  The student would then push through the pain either at the behest of the teacher and/or their own ego, resulting in a blown out knee that now needs re-constructive surgery in order to put right.

This is not Yoga, but likewise, it is not a mistake limited to ‘fixed pattern’ practitioners.  An Improv Yogi can just as easily ignore an injury and do more harm by performing a pose that is unsafe given their current condition or level of experience.  In both cases, the mistake was the same, they were not practicing ‘Freedom Yoga’ at all, which is the capacity to be guided by your innate inner truth, not the delusion created by ambition or ego. Or sometimes it’s just a simple lack of empowerment.

I make the last point because teachers can either empower their students, or they can take it away.  I have even seen very advanced teachers do the latter, resulting in a student who will never be anything but a student, and forever dependent on the teacher.  The other side to this coin is that some students want to be dependent on their teacher and/or the system of Yoga they practice.  Their practice has become externalized, which removes the responsibility for the student to discover the teacher within.  Take the teacher away, or close the school they practiced at, and they have lost their perceived connection to Yoga.

Someone who practices ‘Freedom Yoga’ is by definition liberated enough to exercise self determination in order to achieve a positive outcome, physically and emotionally.  This requires the student to take responsibility for their decisions.  This may well mean they go to classes, because that is exactly what they need, and a basic self inquiry has led them to that conclusion.  Eventually, it might mean they need to take the steering wheel and drive solo.  It might also mean they need and/or wish to do both.

Even at an early stage, the student of Yoga should be looking inwards for guidance, even if it presents the apparent dichotomy that what they need is external guidance.  If this is a conscious decision, rather than the creation of a subconscious dependency (initiated by a dominant teacher whose success is measured by how many ‘followers’ they can create) then it is a path that will lead to liberation of the student.  A student going to a new Yoga school must take the responsibility to recognize whether the practice and the teacher resonates within them.  Do they feel empowered, or have they simply become starstruck?

Following a fixed pattern is not wrong, but how you follow it can be.  Listen to your body (and heart), give it time to adapt and the pattern works its magic.

Actually the magic is not in the pattern at all.  It is just a tool.  You are the magic.  So the basic premise is that the Pattern is already there, and slowly but surely it teaches your body and heart to know itself.  There is nothing wrong with this approach and it offers the advantage of a clear direction.  Depending on the type of person you are, this is could be the perfect solution for taking your Yogic journey.

But there is another way, and that is to let the ‘Pattern’ find you.  As your practice grows, so too does the pattern.  That pattern is likely to look completely different for Person A than it does for Person B, but the journey they are taking is leading them to the same place!

There are people (like me) who are negatively distracted by big lofty goals, or even a very clearly defined road-map.  These goals attract attachment to the destination, making the journey almost irrelevant compared to your ability (or lack there of) to cross the “imaginary” finish line.  Small goals work best for me, and these goals can vary greatly in nature, for example:

The thing is, both systems are valid, but one is far more likely to resonate within you than the other.  Only you can know your right path.  Regardless of the path chosen, ‘Freedom Yoga’ can either be present, thus enhancing the journey, or it can be absent, removing joy, liberation, self-determination, and responsibility from Maha Sadhana (The Great Practice).

Dharma Mittra knows there is only one true teacher, and it is the teacher inside of you.  These methods are there not to replace the inner teacher, but to help you gain access to it.  It just so happened I found my teacher outside of an established system, it was the best way for me to make the connection. It might not be for someone else. The point is, it is not how you find the connection, it is simply that you find a way to make it.  Freedom Yoga is an integral part of that process.

So what is Freedom Yoga?

Well I sit on the floor…

I take a few deep breaths…

and the rest is history baby…