You are here: Home / Yoga Articles / Awakening • Creating a More Beautiful World / Musings from the Mat / Wherein our Heroine gets to spend the afternoon with Yoda 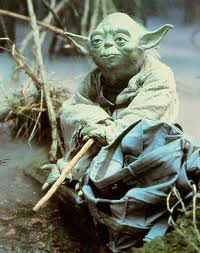 I've been hangin' with Yoda!

I’ve just back from my weekend Journey Intensive with Brandon Bays in Auckland.

140 participants. 70 trainers. One Brandon Bays. And a whole lot of Consciousness and Love.

Now, I had a fair idea of what I was in for, as I’d read Brandon’s book a couple of times, and I’d had the honour of interviewing her for The Yoga Lunchbox in January.

Still, I was blown away.

Brandon held us enthralled from 9am until 8pm both days, teaching through story, leading massage trains, taking us into guided meditations, encouraging us to sing our hearts out to Kirtan, making us shake, shimmer, and Shakti it up in dance and of course taking us through the process that is the Journey.

As a result, I have no doubt that every single person in that room experienced themselves as Grace, Source, Love, God, the Universe, Consciousness, Joy, Bliss…

Yep, Brandon effortlessly helped us open up the armour of the ego and allow it to drop away, so we could shine forth as the light that we all are.

And most of all, it gave me a glimpse of what the world is in the process of becoming. Things, they are a shiftin’ and a ‘changin’ and teachers like Brandon Bay – who travels teaching 44 weeks every year – are at the forefront of this shift and change.

This is a woman who held the stage for hours at a time, speaking from Presence the entire time. She was open, she was focused, she was clear, and she was communicating in far more than just words. Magic was a-brewin’.

During the course of the weekend, we all got to experience three processes – one spontaneously group-led by Brandon to target self-love, and two one-on-one with another participant or trainer.

The process itself is very much like a guided meditation. All it requires of you is to be open and to allow grace to do its work. On the Saturday, there was a live demonstration on stage, when Brandon choose a trainer and asked if she’d be willing to do The Journey on stage.

The Journey means deliberately going to an emotion that’s been disrupting your life and feeling it completely and fully. Doing it in front of 200 people takes guts. But the chosen trainer, Tanya, stepped up to the plate and committed fully to the experience.

The result was something incredibly powerful. Watching someone be totally vulnerable in front of a crowd and completely experience layer after layer of emotions – with all the physicality that can accompany it – demonstrated that this is the real deal.

Not only that, but many people in the audience experienced all those emotions right along with Tanya, and so opened to healing merely by observing the process.

Once we’d seen it happen, Brandon went over the script – a living, changin’ document that has much evolved since her first experiences of the Journey nearly twenty years ago. With script in hand, we partnered off with a person of our own choosing, and took each other through a process.

Hot damn was it incredible!

I’d had some thoughts about what emotion things I might want to heal, but what showed up was something completely different. And someone completely different. It was incredibly healing, and that night, the same person showed up in my dreams and we continued the conversation we’d had during the process, taking it to another level of healing.

Did I mention magic yet?

Sunday was the physical process, when we got to take a space shuttle around the insides of our body and heal a physical issue. This time I wasn’t surprised at what showed up – well, maybe a little.

After descending a sweeping marble staircase with a carved mahogeny bannister wearing a flowing red dress and heels (after a day and a half of guided meditations my visualisation was the bomb!), I threw open giant embossed, wooden doors to reveal today’s mentor was… Yoda!

Yes, he of Stars Wars fame .

And help me indeed he did.

We stepped onto my space shuttle, which had materialised as a magic carpet, and speed off down narrow, winding, dark  tunnels with oozing, red walls. When we finally came to a nice, soft landing, I had no idea where we were. It was some type of large cavern, with those same red, oozing,organic walls. Then I saw a tall, white column off to our right and realised we were beside my spine.

Of course! I thought I might end up there… I’d had a spinal fusion when I was 16 years old as the disc between L4 and L5 had ruptured and almost disintegrated, for no apparent reason. Something the doctors put down to degenerative disc disease. Except there ain’t much degenerating now!

My partner asked me if I needed to go inside my spine, and I watched as a tiny door appeared up on high. Somehow I was able to reach up (must have been the high heels) and open the door, and Yoda and I stepped into my spinal column.

Ew! Inside, the walls were the colour of chedder cheese – that’s the soft yellow ofNew Zealand chedder cheese, not the orange-dyed hue of American chedder cheese. Hand-sized clumps of the crumbly walls were falling away. On one side, a gap had opened up into deep space. As Yoda and I stepped up to the hole to take a closer look, we were sucked over into the blackness and shot feet first down, down, down…

And landed at the campfire scene where my Mum was waiting to speak to me, along with my Dad, brother and sister. I’d lost my high heels and flowing red dress and was now wearing blue bata bullet shoes and an ugly shirt underneath some kind of sweatshirt. Yep, it must have been 1984 folks and I was nine years old again.

As it turned out my Mum was the only person I needed to speak to, and my Dad, sister and brother were just hanging out playing support. After our illuminating and healing conversation, my whole family stood for a moment in namaste, honouring the divine in each of us, then the campfire melted away and Yoda and I were sucked back up into my spine. Red dress, high heels and all.

I watched incredulously as the gap in my spine knit itself together in a delicate lattice pattern that became more and more solid. No more crumbling, rotten, yellow walls – my spine had been transformed into shiny, hard, vibrant white light, shooting straight up to the horizon.

Our work done, Yoda and I stepped back on our magic carpet and headed for the exit, where I said a fond goodbye to the little guy, chuckling as he blushed as red as my dress when I kissed him goodbye on the forhead.

Delicately lifting the hem of my dress, I scampering up the marble staircase as only a yogi can do in sparkley red high heeled shoes and opened my eyes into the late afternoon brightness of an Auckland summer’s day.

Hot diggity damn, that was just so much fun – I got to hang out with Yoda! And I was left feeling light, joyful, and totally effervescent.

The weekend ended with Brandon leading us in a standing, guided meditation designed to open us into our highest potentiel.

She’d had us cooking for nearly 20 or so accumulative hours by now and this just blew our lampshades right off. There was light shooting up, down and all around as two hundred people stepped into the very essence of Who They Are and saw themselves walking in the Light a year from now, five years from now, ten years from now.

Emotions were high – joy, happiness, and love reigned. This was positive programming, and Brandon wasn’t letting anyone out those doors until they just knew Who they Truly Are.

‘cos once you’ve felt that folks, there ain’t no going back. Even when regular life hits you on Monday, and the weekend intensive fades to a distant memory, there is always that memory  in your cells of what Truth is. Of Who You Are. And it calls to You.

It’s been calling to me for a long time now – ever since 2004. And every time I stepped back into that Light, it took just a little bit more for life to knock me out again. I stayed just a little bit longer. The Call got stronger.

This is the Awakening of Consciousness.

It’s happening in The Journey community.

It’s happening in the yoga community.

It’s happening every time we have the courage to drop our armour and reveal who we truly are to each other.

It’s happening every time we can keep our hearts open even in the face of great pain.

It’s happening every time we make a conscious choice to love more, care more, reach out more, and just be a little kinder to ourselves and other people.

And that is like the coolest thing ever. Even cooler than hanging out with Yoda for the afternoon.

Brandon Bays, you rock. Thank you so much for inviting me to come to The Journey Intensive!

And my dear Lunchboxers, I so hope that if your heart was a-callin’ to you to go… that you went!