You are here: Home / Yoga Articles / Starting • The Foundations of Yoga / Reviews / What’s it like attending an Online Studio? 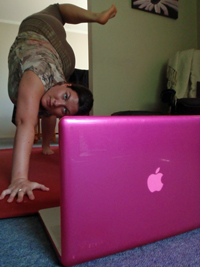 Jessica 'attending' her online yoga class with My Yoga Online

Starting with My Yoga Online was a bit rougher than expected.

Sure – my membership came through before the holidays, quick and efficient, but it was also within spitting distance of a two week computer free period (a total treat if I may be so bold to admit) and that made beginning immediately seem silly.  Two weeks on, two weeks off didn’t appeal to my slight OCD.

Instead I worked out the wee kink in my login, (excellent customer service response – MYO score points!) got my profile page together and did some browsing around to see what was on offer, how things were laid out, and the like, then allowed for myself to go off on holiday.

I was excited to see a good number of videos by Bernie Clark, a major Canadian Yin Yoga instructor, and nostalgic to see a couple videos by one of the main teachers.

She’d led my very first teacher training back in 2003 and introduced me to the official practice of Yin, though I’d been doing it on my own since high school, Melina Meza of Seattle WA.

Since I knew I wasn’t going to have a good, solid run of using the site, I pulled up Melina’s short Summer Yin Restorative Practice and had a go.  I love Yin and am familiar with not just the style overall but her in particular, though not for several years now.

I hoped to simply see how the video streaming worked out.  It was nice enough, and it was usefully short, but after that I went back to doing my own thing with a strange feeling of what could be called at superiority and yet isn’t actually.  Especially on the Yin front.  But thankfully it was only as regards my own body’s practice. 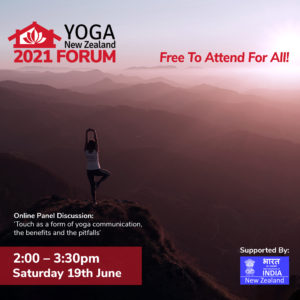 Is it stubbornness?  Or self-knowing?  Am I knit-picking the instructions as many with a good deal of training under their belts can get stuck doing?  Or am I merely finding that no instructor can quite address my unique body’s needs on any given day and certainly not by prerecorded routine that I have no familiarity with?

I pondered these things while at the family bach in Kaikoura.  I took advantage of the near daily fishing trips to push furniture out of the way and do my own Yin thing, otherwise known as ‘roll around on the floor Yoga.’

I used my time to say hello to my hips, to soothe my exhaustion of being with a large group for so long, to continue grieving the recent passing of my beloved Granma.  Always, I tried to feel how and why my own self-guided practice met or did not meet my needs, so that I could bring that insight back to the online practice.

I think the answer to my questioning is, it’s a little of everything.  And it’s a lot about how Yoga is a self-actualized practice.

We may not have Patanjali outright saying, as the Buddha does, don’t do something because an ‘authority’ says, do it because you tried it out and it worked for you, but my reading of the Upanishads has given that distinct, if more metaphor heavy and poetry-like, understanding.

True, the basis for many Eastern traditions is a guru, and the teacher-student dynamic is heavily stressed here in the West too – but don’t all learning environments hope to push the student out of the nest and into the wind to fly by their own wing work?

Or did my hippy parents lead me a bit off center with that idea?  Have my days of self-practice devolved into some self-indulgent mockery of Yoga?  Am I still a surly, sulky girl at heart?  Just very committed to the inner guru idea?

More importantly and to the point – am I a bad student?  And if so – can I take heart in the fact that I’m working with a group of online, pre-recorded teachers?  Can I take the offerings and do as I like without feeling untrue to their intentions?

Can I ignore directions that I know don’t serve me and still admire and acknowledge the intelligence and qualifications of the instructors?  Have I taken too many teacher trainings to be a good, open-minded student and instead entrenched myself in the diadactic assessing state of educational processing, by which we listen and pull apart the structure, technique, context, meaning, etc.

By the end of the holiday, and after a week getting life back into its familiar rhythm at home, I was less immediately concerned with these questions.  I’d also taken a few nice long walks in woods close to home, a thing of immense sanity-saving in my life.

I turned on and logged on and was all ready in a state of equanimous calm to make the most of the quiet house and my mat before anyone returned home only to find that nothing would load.

Of course.  Being surly – downloads easy.  Being open – message error.

I sent in a little report/help docket.  And then I did my own practice, which turned out to be more structured and well-balanced than I generally guide myself through.

Which is to say, I warmed up, did a selection of things I don’t normally do (because I don’t particularly like to do them) for a decent amount of time, cooled down, and had a nice little Savasana.

I had been thinking of my first teacher and how integral the two or three classes a week I spent under her direction were for me back in 2001 when I began my ‘official’ Yoga journey.  How vital those three years were to removing me from an abusive relationship and then from a job pathway that didn’t fulfill me.  I was thankful for the opportunity that not using My Yoga Online offered that day.

The next day, after walking about on some errands, I came home and decided that I’d get more smelly before showering.  So I logged on to email, saw the ‘fixed it!’ email (customer service shining brightly again – fantasticness and more points to the service), and then proceeded over to the actual site.

With ‘am I a bad student’ once again in my mind I followed along to Shiva Rea’s Radiant Heart practice.

I’d very nearly bought the dvd before moving here to New Zealand, so it had been one of the highlights of discovery in the video files.  Short, at just over 30 minutes, and slightly uneven at the end (an uptempo movement meditation series follows an otherwise conventionally mellow cool down), it was lovely.  Just the thing I needed after a walk.  Movement and energetic instruction without being too long or too fancy in its sequencing to trigger my stuff regarding vinyasa/power flow/flow yoga.

Afterwards I looked at the reviews and then the site’s description and was surprised it was listed as intermediate.  I was amused by the several comments saying that the artistic nature of the shoot made it hard to distinguish the alignment and proper posture and that must have been what was meant by the level classing.

If I had any last remnants of ‘bad student’ worry, that dispelled them.  I’ve trained with Shiva and I haven’t done my homework, nor even plan to ever, but I do know that she wouldn’t obsess about how to best rotate one’s body in offering and receiving of heart energy.  Bhavana, the feeling state of the practice and practitioner, one’s intention, trump body mechanics.  I think she’d agree that they even trump taking instructions sometimes.  In fact, I’m sure of it since I was a lone goose my last training with her and she was nothing but supportive.

So, thinking over all this, having experienced my self-reflective muscle in spasm, and also felt it realign into a soft, ready state, in the appropriately contrary manner of a surly and sulky girl, it rather makes me want to be very attentive and pay exceedingly good attention to what the video instructors tell me to do.  More reports to come!

Lesson #1: reliable internet is a must for a yoga download service to work.

Lesson #2: consistent, helpful tech support is a necessity – My Yoga Online has it!

Lesson #3: bad students don’t self-reflect about how to be good students.