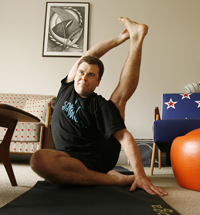 Scott Milham has practised yoga for 20 years and been a teacher for 11 of them.

Prior to bcomeing a fulltime yoga teacher he was a professional dancer for over a decade working with such companies as the Hong Kong Ballet, Sydney Dance Company, Footnote Dance Company.

Over the years, Scott has trained with T.K.V. Desikachar, Sean Corne, Saul David Raye and Erich Schiffmann. He has also assisted Erich Schiffmann with his annual teacher training in 2009 at Exhale Sacred Movement yoga studio in Los Angeles.

Scott is also the resident yoga teacher at the NZ School of Dance and was the backstage yoga instructor to the performing artists at the ’07 Big Day Out.

Scott’s passion for yoga is only equalled by his passion for the arts. His classes are often accompanied by a variety of music. He is also studying towards a degree in Art History and English Literature at Victoria University in his spare time.

I always find this question a silly one. Like, do you have the right membership card?

I had a discussion with Erich Schiffmann about this in Los Angeles back in 2006. We were both commenting on this dreaded question. His answer was I teach ‘Freedom Style Yoga’, which is essentially the freedom to teach any style you want too.

This, to my understanding of the philosophy of yoga, is more in keeping with an open mind and freeing your spirit to experience, using every possible tool at your disposal toward enlightenment. Rather than an uncomfortable sensation of being shoved in a box. So ‘Freedom Style Yoga’ it is then. Cheers E!

I think yoga came to me, rather than the reverse. I remember the first time I became remotely aware of it. I was nine and I had just finished a ballet class at Dance Works studios on Queen St. My favorite album was the Beatles’ ‘White Album’. A Hare Krishna ran up to me and insisted I have this book to which I quickly agreed as it had pictures of John Lennon and George Harrison on it.  It was called ‘Chant and Be Happy’.

I read it and learnt the Hare Krishna chant, still a favorite. I still own the book too. As far as asana (postures), I joined the Hong Kong Ballet Co. in 1993 and one of my fellow dancers, who was French, had just returned from a six month hiatus from his dance career to study with Iyengar in Pune. He used to do this incredible warm-up for an hour before class. I was impressed by the fact he could balance on his ear, which was Eka Pada Koundinyasana I.

I remember thinking in my 19-year-old tongue “That is the fucking coolest thing I have ever seen!” He looked so calm and was a very together, focused, yet playful guy. I instantly asked him to teach me and he did for the remainder of the time he was in the company.

I am not sure there is a specific moment in time when I went “Oh yeah this is a bug!” But I will say that a teacher of mine, Tony der Allen, when I lived in Tauranga really was the person who truly influenced me to look deeper into Yoga, beyondasana.

Ironically, he was and still is one of the greatest asana teachers I have ever met. He has a degree in Philosophy and he got me thinking about how all the eight limbs worked and what is or where is the depth in the practice for me? This part of yoga is always more important than whether or not you can do Hanumanasana.

Well, it is my friend and a constant in my life. It has truly helped shape me as a person.

It continues to challenge and encourage me to go further and dig deeper on every level I can imagine.

It has been my fulltime job for seven years to honor and practice and pass on and teach yoga to anyone who has the time and the will to listen.

“It is India’s greatest gift to the world,” Krishnamacharya once said.

What home practice? Nah, just kidding. It was something I let slip for a while back as I come became busier with the volume of teaching I do. But I reconnected with it a few years back in a stronger way than I ever had before, which was magical.

I am lucky I have a studio in my house so I can practice any time I like too.

Sadhana is more important to me than anything else I do with yoga. I could stop teaching tomorrow and never do it again and I would be fine. But I can’t live without Sadhana. It is where it all comes from, my experience with the philosophy is where I get my truth.

As to what I do? I meditate every day, this is the most important thing in yoga to me. I am really into Pranayama, the older I get the more my interest has been pulled into this limb of yoga.

I do a lot of Asana mostly because I enjoy it, but I never practice the same thing day after day. I constantly switch it up to create balance – the meaning of yoga.

I think the most important thing for a yoga teacher to do is live it though. If this is what you choose to do, then walk it, don’t just talk it. I’m vegan, I am as environmentally conscious as I can be and I try to be the most compassionate person to every living being I can be.

This is all part of Sadhana to my understanding.

This is what yoga to me really is about.

I think my students would answer this better from their perspective. I hope first and foremost people have fun! I hope they feel educated in a way that was easy for them to understand.

I play music in a lot of my classes. I think it is a hangover from being a dancer. Movement and music go together nicely. I play everything from Ravi Shankar to Metallica, from Mozart to Clash. But it is a type of song or feel that is appropriate. No complaints yet!

The class content changes every week, but I explain how the themes of each week run into one another. I always start with Pranayama and short meditation and end with Savasana.

I have had the privilege of being there to assist students through some very challenging and demanding times in their lives. I have also seen the joy on their faces as they have achieved certain goals in their practice.

I enjoy taking people on a journey. I see my role as one that needs to become redundant. So that the student no longer needs me and can move into their own Sadhana with a confidence of alignment and structure of practice that feels safe and comforting.

I like the thought of setting people free. I also like the fact that I have not felt like I’ve worked for the last seven years. That always brings a smile to my face.

How amazing it is first and foremost. But I also wish that the world would stop looking at yoga as a “sophisticated PE class”, to quote Erich Schiffmann.

There is a great debate going on in India and around the world about this at the moment. The fact that yoga is a philosophy must be recognised and respected as that. It has such a deep and ancient history. My wish is that the whole world knew that. I also sincerely wish for world peace too.

I am not sure, to be honest. After watching the documentary ‘Yoga Inc’ I am not sure it has the chance to be everything it could be anymore?

I find styles like Hot and Bikram Yoga an insult to the philosophy. How can you justify using resources such as electricity to heat a room to recreate midday Madras when asana in India is practiced early in the morning and late at night to avoid that kind of heat?

Not to mention the fact we live in this planet’s greatest crisis of resources and it is an ecological struggle to support life as we know it.

Isn’t yoga about creating balance? Is it not about working towards balance in your mind, your body and your soul and yes, also the environment that supports you?

I live in hope that yoga will be respected in the way in which I believe it was always meant to be, so that it can be a catalyst in bringing balance to all of us and to the earth itself.

No, but if you have read this far, thank you.