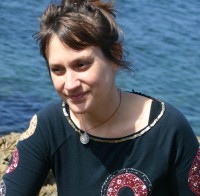 It was a long time between The Yoga Lunchbox asking Adhyatma to do a yoga teacher profile, and her finally sending in her answers.

In between came Global Mala, which raised money for one of Adhyatma’s passions, the Yoga in Prisons Trust. She’s on the board of directors, and has taught in prisons too, writing about her experience in Broken Warriors – reaching out to prisoners with yoga.

There’s no doubt she’s doing great work here in Wellington, and it’s so lovely to finally be able to get to know her better through her profile answers.

I teach Satyananda Yoga, which is a classical and traditional form of Yoga. Swami Satyananda was a close disciple of Swami Sivananda of Rishikesh who’s mandate was ‘ Serve, Love, Give’ and this thread has continued to this day with an emphasis on Seva (selfless service) in all our ashrams.

The Satyananda approach incorporates the whole person, not just the body. There is an emphasis on awareness and practitioners are encouraged to learn about all aspects of their personality through Yoga. Change is a process that takes place naturally as a consequence of regular practice with full awareness, rather than by forcing the mind and body to the limit and beyond.

I attended some Ananda Marga classes for a year or so at the age of 14yrs in 1987 at the Wellness Centre in Mt Eden where I grew up. As a child I had a vivid imagination, so the Prana Vidya type visualization techniques and Yoga Nidra relaxations seemed easy.

This set a good samskara (impression)  for when I picked it back up again years later with a Satyananda Yoga teacher in 1996. It was actually the Yellow Pages where I found Mt Eden Yoga House… and what I liked most about the class was that it was just in someone’s home and the classes were quite small.

There was a nice casual feel but the teacher was a well trained Swami imparting Vivek and Vairagya (non-attachment and discrimination) through her teaching.

I guess it was when I met my teachers Swami Kailash and Swami Muktidharma… I sort of felt… wow here’s something different going on! Then I was suddenly transported into Bihar ashram – the jungle and the heart of it. And four months later some transformation and purification had definitely occurred but to this day I still cannot really put what happened and is still happening into words!

I had a history of drugs, alcohol and self abuse. The first big transformation for me was giving up smoking. Well it was so easy! All I did was start daily Salute to the Sun and suddenly I didn’t want to smoke! It took 3 days and I haven’t had one since. That was 12 years ago.

I realised that firstly Yoga is a great replacement for any habit… well it is a habit in itself so ultimately we must also give up Yoga! But til then it’s a pretty good addiction!

Secondly… I realised: dont TRY to give up anything… just do Yoga and see what happens! The process of purification should be a natural one, not forced.

I do what I need to do, and if I don’t then I don’t get hung up about it. Ranging from 20 minutes to 45 minutes in the morning of appropriate and seasonal asana, pranayama and mantra meditation. I practice a lot of Karma Yoga throughout the day and Mantra sadhana whenever possible. (Yep I’m addicted.)

Depends who it is asking but usually I try to keep it light and explain that it is designed to lead us towards meditation. But that also the state of awareness, or mindfulness is something we can learn to take OFF the mat and into our daily life. That it’s about accepting things as they are and being more and more positive.

I try to come across as ‘normal’ and relate to the person I’m talking to and where they are coming from. I feel I can step into people’s shoes easily.

An hour and a half of their own space. Asanas, pranayama, mudra, bandha, meditation and deep relaxation. AUM.

That’s it’s more than stretching… it’s not just an exercise… or a religion! That you don’t have to be flexible to do it…

Yoga is a tool for managing this life we live. I would like to see it accepted more  into prisons and schools for a start.

I am truly blessed to have found this path and to have such a great teachers as Swami Satyananda, Swami Satsangi and Swami Niranjanananda. The techniques we have been handed down really speak for themselves, so we can rely on them to do their job. They work.

At Kalpa Taru or Yoga in Prisons Trust.