You are here: Home / Yoga Articles / Starting • The Foundations of Yoga / Reviews / Top Ten Best Yoga Websites And Articles On The Web 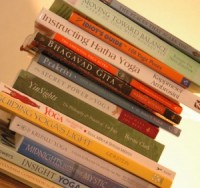 There are some awesome yoga reads out there

There are some fantastic yoga websites out there in the worldwide web, but finding them can be tricky. Luckily you’ve got The Yoga Lunchbox here to help.

People often ask me where I find the time to read so much – it’s simple. I use a RSS reader (GoogleReader) and subscribe to all the websites I love.

Every morning (or evening) instead of reading the local paper or watching the news, I open up my Google Reader and see what articles have arrived. It’s a great way to get inspired and uplifted, while often learning something. I’ve had so many “a-ha!” moments in my Google Reader. Plus I can now read Google Reader on my iPhone, which means I carry inspiring reading around with me and don’t need to resort to trashy women’s mags in waiting rooms anymore…

I get so much enjoyment out of my Google Reader I thought I would offer up a list of my best of the best yoga reads.

These are in no particular order, just articles and websites that I’m loving right now.

I’m always on the hunt for new reads too, so if you know of something great that I’ve missed, please leave a comment!

I’ve already featured Lia as a guest author here on The Yoga Lunchbox with her lovely article Learning to soften, but there are so many of her articles that I have just loved, loved, loved. Lia’s got a delicious, light-hearted way of zeroing in on the most subtle of yogic realisations that helps expands her readers understanding of what it truly means to practice yoga. Some of my favourite Shanti Town articles are:

Local hometown Wellington girls, Kelly and Lynda are the force behind Yoga Unlimited, an intimate yoga studio on Tory Street. They started writing a blog with the shift of their website to WordPress, and it’s been delightful watching them both grow and develop as writers. I’m gold starring more and more of their articles for future reference, three of which you can check out below:

Another local Wellington Yogi, Mike doesn’t write that often, but when he does, I love his clarity and depth of wisdom. He’s a family man, a studio owner and a dedicated astanga practitioner. His latest read got me going:

Now Kenton is not a yoga writer in the strictest sense of the world, but his wisdom on discerning the true nature of life is almost a leap beyond yoga. He has a way of making complex ideas and realities accessible. I’ve been following his blog for about four years now, and he’s most definitely one of my favourite writers. He doesn’t post very often anymore (but if you’re new to him there’s a HUGE archive of articles available to read) so when he does, I know it’s something worth paying attention to.

Again, this is a blog I’ve been reading for about four years now, and it is HUGE. Anmol is a born storyteller and writes eloquently of the ins & outs of the spiritual journey from the perspective of a kundalini yoga. Some of my favourite articles include:

6. Zen and the Art of Peacekeeping | Marianne Elliott

Marianne is a good friend of mine, and as a yogi and writer, we have a lot in common. I’ve loved reading her blog over the last year or so as she also has immense experience and understanding of the world of peace keeping – quite literally. She’s spent time in the Gaza Strip and in Afghanistan and has recently published a book about her experiences.

Marianne writes with great sensitivity and compassion, but most of all, great honesty. Some of her earlier articles, written when she was in Afghanistan, are heart wrenching at times. You’ll also find her writing here on the Yoga Lunchbox. Lately I’ve enjoyed the following reads:

Ok, I don’t know much about this dude – he’s new to yoga. From his blog I guess he’s doing yoga teacher training as some kind of dare, because it’s so far away from who he is. So I’m not quite sure what his story is to be honest, but what I do know is that his outsider’s view of yoga gives him this wicked way in which to lambast the silly seriousness that yoga practitioners can be prone to. You gotta read this article!

8. Mightier Than Any Sword | Anne-Marie Emmerson

A journalist and yogi living and working in Wanganui, there is something quintessential kiwi about Anne-Marie’s writing that makes the yoga perspective so fresh. She’s figuring out how to be yogic while also being a journalist in a small town run by polarizing mayor Michael Laws. Anne-Marie also has a delicious way of capturing the miniature of life lived moment by moment. And she’s a storyteller too. Articles I’ve loved include:

And the other two Top Yoga reads? That’s for you the reader to decide – leave a comment and let me know who you love to read.