You are here: Home / Yoga Articles / Teaching • The Business of Yoga / Yoga & Community / The Ecology of Yoga Mats: What’s a Green Solution? 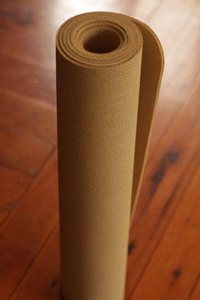 Rubber & jute mats, with no dye, are the greenest yoga mat option, according to Laura Cornell

This article originally appeared on Green Yoga. We thought it was important enough to re-publish here.

When I became a yoga teacher, one of the first things I did was to buy a set of mats for my students. It wasn’t until many years later that I learned that the main ingredient of yoga mats is polyvinyl chloride or PVC, an environmental toxin.

PVC is widely considered to be the most toxic plastic.

Vinyl chloride, the base ingredient in PVC, is a known carcinogen, and those who work in PVC plants suffer elevated health risks. Dioxins and other carcinogens are byproducts of its manufacture.

Yoga mat manufacturers add plasticizers to make the PVC soft and sticky. It’s not usually possible to know the exact ingredients of any given mat, but the most common additives include lead, cadmium, and a class of chemicals called of phthalates, which disrupt the endocrine system among many other health problems.

These additives off-gas and leach during product use, and are also known to seep into groundwater once the product goes to landfill.

PVC itself does not biodegrade, and it remains on the shelf, in the environment, or in the landfill.

Sometimes landfills catch on fire, and then the PVC releases dioxin, hydrochloric acid, and other toxins. PVC is extremely difficult to recycle, which is why so little of it is recaptured.

As my awareness of PVC increased, I felt numb at first, then deep grief, and then acute frustration at how much harm my way of living causes the planet. It’s not just the yoga mat, it’s everything. At the same time, I reminded myself that no matter how small we start, we have to start somewhere.

For me, the first steps were clear: stop producing and buying PVC.

I later learned that Greenpeace, Health Care Without Harm, the Center for Environmental Health, Green Sangha, the International Firefighters’ Association, and the Plastics Recycling Coalition are all working to phase out PVC or to minimize its use.

The marketing of yoga mats as a fashion accessory has increased, encouraging yoga practitioners to buy and own many mats in different colors and thicknesses.

You can also buy mats in floral, ocean and other nature prints, reflecting the deep desire we all have for intimacy with nature. How ironic it is that practitioners are invited to practice with a picture of nature on a toxic mat?

Knowing that I could no longer practice in good conscience on a PVC mat, I began to do my postures on a Mexican wool rug, and later on a cotton rug. If my hands slipped in downward dog, I moved to the side and practiced on the wood floor.

I found that when I learned to use core strength to hold myself in the pose, I began to slip less. I also noticed that I felt more grounded when I practiced on wool or cotton, and that practicing on plastic was energetically imbalancing. I learned that B.K. S. Iyengar and Pattabhi Jois had originally practiced standing postures on bare floor or cotton rugs, and floor poses on blankets.

As I talked to other yoga teachers about this issue, I realized how attached we all are to our current mats.

One friend told me it would be almost impossible to conceive of Iyengar Yoga in the United States today without the sticky mat. Another told me how her blind student needed the mat to feel stable on her feet, and another how she needed it to be safe in arm balances.

Looking for a “sticky” alternative to PVC, I ordered rubber mat samples from a U.S. company but found the smell too strong and the additives too heavy on my mind. I discovered a “nontoxic” mat from Gaiam , but found that they had only eliminated the toxic additives, but not the PVC.

Recently I learned about the ecoYoga mat** developed in Edinburg, Scotland by Matt Loening, an ashtanga teacher and director of The Practice Place. It is made of natural rubber and jute. It has no synthetic additives or plastic components and is completely compostable.

After extensive research, I believe that the ecoYoga mat** is currently the greenest option** available for those who wish to practice on a sticky mat. To date I haven’t found an end-use for recycled PVC mats—a very challenging problem indeed. But I’m still looking, because I want to know what to do with the mats sitting in my closet.

The human mind is a double-edged sword. We are the only species with the capacity to construct our lives so far out of balance with nature. This is why Patanjali placed the ethical constraints, or yamas, as the first step in the yogic path.

Understanding the impact of our mats on the earth is a good first step towards a more conscious relation to the planet, and non-violence and compassion for all beings.

Information about the toxicity and recyclability of PVC may be found on these websites:

**YogaPass has recently started selling LovEarth Yoga Mats, which are also made of rubber and jute, and contain no dyes, hence just coming in one colour – natural. You can check out LovEarth Mats here, now available in New Zealand.