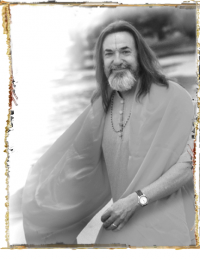 Swami Govindananda, affectionately known as Swami Ji, is a Kiwi boy born and bred, so he always loves coming back home to spread the yogic word.

He’s back on tour here in New Zealand in April, May and June. You can find full details of his workshops and retreat here.

An entertaining and inspirational speaker, Swami Ji gives some interesting insight into what it means to be a swami, and why every serious yogi needs to find a Guru one day.

In essence, it refers to one who is dedicated to a life of spiritual practise based on Hindu teachings that include the Vedas, Bhagavad Gita, Bhagawatam, Ramayana and other scriptural texts.

To become a Swami, an individual undergoes intense study, in some cases learning Sanskrit, philosophy and profound meditational practices.

Some Swamis teach, others serve humanity in related fields, and some renounce worldly life, preferring instead to live in Ashrams or hermitages.

It is typical for a Swami to wear robes in shades of ochre, yellow, golden, or orange in recognition of their status and dedication. They may shave their heads, or wear their hair long, usually with a beard.

I was invited by my Guru, Shri Maharaj Ji, to live with him at his Ashram in India to become a Swami. This was a rare opportunity, particularly since no other Caucasian had ever been  so fortunate to learn directly from such a great Master.

After living with him for a number of years undergoing intensive training he graced me with the name ‘Govindananda,’ which means the bliss of Bhagwan (God) and handed me the robes of a Swami.

Shri Maharaj Ji asked me to spread the knowledge of Bhakti Yoga to the four corners of the earth. In my modest way, this is what I have been doing for the last 25 – 30 years. It is a full time position that has seen me visit many countries and meet many wonderful people. I am honored to be able to offer such a service to individuals who have a desire to improve and learn of themselves.

2. Does a modern day yoga practitioner need to have a Guru?

Everyone needs a Guru.

It is more a question of when the individual is ready to benefit from one.

This is written clearly many times in all the revered scriptural writings of India.

Guru refers to the one who has the power to remove the darkness of ignorance from an individual. The ability to do this is not possible for any soul bound by Maya, rotating in the wheel of birth and death. Hence the Guru is also known as Maya teet, the one who is free of Maya and no longer bound to rebirth.

Such a personality is a true Guru, and meeting one, accepting the Guru, and following the Guru’s advice, is rare indeed. But not impossible. To meet one, the student needs to have developed a hunger, or thirst to know of the self and Supreme Self, beforehand. Then it is a natural evolution.

Usually, the desire for this meeting is inspired by reading or hearing about the Saints and Sages of India, and of their teachings. Then, slowly, an understanding develops, and from there, interest grows. To help in this preparation is one of the roles of a Swami.

Having said all this, it is important for people to first concentrate on the knowledge that the Guru gives, and then, when this is assimilated and understood, to begin thinking about the role of the Guru and of meeting one. It is not a thing to be rushed but should come naturally.

Here’s a quote I like very much from the Katha Upanishad concerning the Guru:

To many it is not given to hear of the Self.

Many, though they hear of it, do not understand it.

Wonderful is the one who speaks of it.

Intelligent is the one who learns of it.

Blessed is the one who, taught by a great Guru, is able to understand it.

3. What lineage does your Guru come from and how did you meet him?

My Guru’s full title is ‘Jagadguru Shri Kripaluji Maharaj.’ He is not just a Guru, he is a Jagadguru, and as such, the only Spiritual Master who has been honored with the highest place among all Vedic Saints and scholars of this age.

The title, Jagadguru, is given to the Guru who brings a spiritual revolution in the world through his teachings. In the history of India only four Saints have so far be honored with the title of Jagadguru in the last 2,500 years – Jagadguru Shankaracharya, Jagadguru Nimbarkacharya, Jagadguru Ramanacharya and Jagadguru Madhavacharya.

Shri Maharaj Ji is now the fifth original Jagadguru. The last one before him, Jagadguru Madhavacharya, lived 700 years ago. This title is an official and historical one, awarded by the Kasha Vidvat Parishat of Varanasi, India.

Shri Maharaj Ji (as we endearingly call him) is widely known for his unique reconciliation of all philosophies and faiths. He makes no distinction of caste, creed, colour or race. He has received numerous accolades for his contributions to literature, music and poetry – and for his spiritual genius. He has received the prestigious Citizen of India award for his outstanding work for charity, and has been the inspiration and guiding force in building temples, free hospitals and schools.

To describe the personality of Shri Maharaj Ji is a very difficult task. It is like trying to gather the waters of the four great oceans and contain them in a cooking pot! Impossible. He can be known to a certain extent through experience and association.

Though I began my practise of Bhakti Yoga in 1975, it was not until 1982 that I was able to meet Shri Maharaj personally at his Ashram in Mangarh, Uttar Pradesh, India. I felt as if I had come home. This union was to prove a profound and significant event in my life. The love and gratitude that I feel towards him is beyond words.

4. What’s it like coming back to NZ – do you ever catch up with old high school mates? What do they think of you as a Swami?

I love coming home! I feel comfortable there, like putting on an old favorite jacket. Everything is familiar.

There are family and friends that I visit and I think they are well used to me as a Swami. Over the years they have seen how my life is unfolding and are confident that it sits well with me. I think too, that they enjoy the viewpoints of life that I bring.

5.  This time around, you’re holding a retreat, can you tell us what people can expect to experience?

The retreat will be held over two days, six hours each day including lunch.

I want to touch on a whole host of subjects such as:

As you can see, there is a lot to talk about and discuss. My hope is that participants can take home with them a deeper understanding of themselves and the world about us. I will also show a simple, but illuminating meditation that can be practiced at home.

Lots to do, and hopefully much laughter and enjoyment as we go about doing it.

You can find full details of Swami Govinananda’s workshops and retreat on his New Zealand tour of 2011 here.