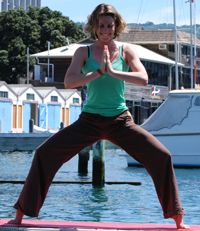 It’s so easy to fall into the trap of thinking that marketing is a dirty word.

Especially as a yoga teacher.

Yet, there are so many people out there in the world who have been meaning to do yoga.

Some of them have been meaning to do yoga for a year. Or five years. Or even ten.

They know they want to…

… but they never quite make it to a studio.

These are the people that we as yoga teachers need to reach out to. They already have desire… there’s just something stopping them from taking that next step of actually going to a yoga studio or yoga class.

They need your marketing to help break down those barriers to yoga – like fear.

Many people don’t make it to yoga because they have this idea that everybody else is bendy and fit and slim and knows what they’re doing.

The only photos they’ve ever seen of yoga are slim, white, young women doing amazing things with their bodies…

So when you think about marketing your yoga classes to reach people who’ve never done yoga before, it could pay to use photos that reflect those people. Ask your students for permission to use photos of them. Show ordinary people, in ordinary poses, having fun, laughing and smiling.

That’s one tiny way to start thinking about how we as teachers can use marketing in a positive way to reach people who already want to do yoga.

Another way is to put ourselves in their shoes.

Cast your mind and heart back to what it was like before you went to yoga.

Can you remember your first class? Was it scary? Did it take a friend leading you in gently by the hand?

My first class was in 1995 on Auckland’s North Shore at an Iyengar Studio. My boyfriend took me along because his good friend taught there.

I was so unbendy there was no way I would have found myself to class any other way.

This provides insight – friends bring their friends to yoga.

So how can you encourage current students to bring a friend who’s never tried yoga before?

How about… offering the current student a half-priced massage (if your studio offers massage) or half-priced clothing if they bring a friend along. And offer the friend a class or two for free.

This doesn’t cost you anything, as the current student gets something at cost, a value-added proposition. And the friend attends a class that’s running anyway.

There’s other ways you can entice new students to try out your studio. Make a big deal of new students in a way that makes them feel welcomed, special, and comfortable.

Like creating a Newbie Pack for X amount of dollars.

Include a four week beginner’s course. A discount off a membership if they sign up after the course. Write a brief introduction to yoga – the ins & outs of starting yoga, and print that off to include it. Include some testimonials from students about how yoga has changed their life.  Toss in a 30 minute one-on-one session where the student can ask whatever they like and spend time on postures they just don’t get.

Whatever – be creative. Just think… if you’ve never tried yoga before… and you walk away from a studio with a pack of goodies offering value, and making you feel comfortable about coming to class… how special would you feel?

What if you teach yoga outside of a studio, like I do?

There’s still plenty of scope to tailor packages and classes to the beginning student.

Try taking yourself to the people – offer 30 minute taster sessions to groups like the local rugby club, a local dance school, a runner’s club. You’ve got a captured audience then, and some of these people would’ve been ‘meaning to do yoga’ for a long time. Get them hooked on the taster session and offer a sweetener deal if they sign up then.

It doesn’t take a huge amount of your time, and the pay-off can be fantastic.

These are just a few of the different ways to market yoga. It’s nothing complicated, nor dirty.

Marketing is just taking some time to think about what it’s like to be that person who’s never touched their toes, or been inside a yoga studio.

Marketing helps us reconnect with the people we’re here to serve.

Who can I help with what I offer, and how do I reach those people?

Me, I’m currently offering a limited number of introductory yoga sessions for total beginners. A package deal of 3 x 45 minutes one-on-one yoga sessions for just $100. It’s just enough to find out what yoga is all about, and get comfortable with the basics so you feel good about going off to class by yourself.

What are you going to do to market yoga to those who need it most?

ps. For a great example of an inclusive and welcoming yoga image, check out Wellington yoga teacher Greg Colson’s header image on his website (a website created by yours truly).