You are here: Home / Yoga Articles / Starting • The Foundations of Yoga / Reviews / Review of YoGoBolster, made by Kiwi company YoGoGear 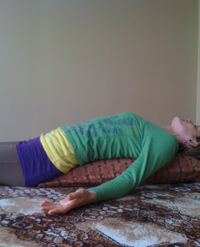 Kara-Leah relaxing on the YoGoBolster

Ever tried to go traveling with a yoga bolster?

A mainstay prop for Iyengar practitioners, and beloved by many other yogis, a bolster provides support for restorative-style yoga poses held for lengthy periods of time.

And it’s heavy, bulky and plain tough to manouvere around in the local yoga studio, let alone across international date lines.

But thanks to New Zealand company YogoGear, I was able to take a yoga bolster on my recent trip to LA for teacher training with Shiva Rea.

Long-time Iyengar teacher Loris Mills and her partner Graham Dickson have developed an inflatable YogoBolster that’s light, portable and functional. Graham is a designer by trade, and he went through a series of prototypes with much testing of a variety of materials and valve designs before settling on the final design.

The bolster itself is made in Dunedin, New Zealand, and the cotton covers are imported from India. It takes just a few breaths to inflate the bolster, and the mouthpiece recesses back into the bolster to provide a smooth surface.

I got the low-down in person from Loris and Graham at their house in Dunedin, and I gotta admit, I was initially skeptical.

Never much of a prop user at the best of times, I just couldn’t see how a bolster filled with air could support the body. That was until I lay down on it. With all the skill of an experienced Iyengar teacher, Loris made sure that I had my spine perfectly positioned on the bolster, while talking me through the ins and outs of how she uses the bolsters in her Queenstown Yoga studio.

I was listening… but I was also melting. Lying on the bolster feels like lying on a cushion of air – no surprise really, because that’s exactly what you are lying on. But a normal bolster feels heavy under the body, there’s a weight as you sink down into it, and it can feel like effort is required to roll off at the end of a posture. Not so the inflatable bolster. I felt completely supported, but didn’t have heavy, sinking feeling of body meeting thick bolster.

And I didn’t want to get off. I was quite happy to melt away and listen to Loris as she described how she uses YoGoBolsters in her yoga studio. They’re lighter, easier to move around, and can be used in ways other bolsters can’t, like perched on their ends supporting one’s forehead in a seated wide legged forward bend.

Newbies would do well to note that the best inflation level for a YoGoBolster is slightly under-inflated. With that extra bit of ‘give’, the bolster melds to the body.

Other bonuses on the regular bolster include the cotton covers. Maybe yogis aren’t meant to get all excited about fashion, but it’s still pretty cool to choose what kind of covering you want your bolster to have. There’s sixteen choices on offer at the moment, with something for everyone’s taste.

Loris and Graham are quick to point out that their YoGoBolster aren’t intended to replace regular bolsters, but to provide an alternative for yogis on the move, or people who like the feeling of lying on a cushion of air.

It also makes it easy to take your own bolster to a community yoga class, where props are less likely to be provided. No one wants to schlep a regular bolster all over town, but carrying a YoGoBolster is less strenuous than carrying a yoga mat.

It’s also the reason why a YoGoBolster makes sense when going on retreat – whether it’s a meditation retreat or a yoga retreat, or even just a general well-being retreat, there’s nothing more delicious than having your own personal bolster to use at any time during classes or free time.

Me, I barely noticed the YoGoBolster in my luggage all the way to LA and back. As the slogan says, there’s nothing quite like the feeling of being in your breath while on your breath.

Every time I lie down on the YoGoBolster, I end up staying for longer than I’d anticipated. This afternoon, doing the photo for this review, my photographer wandered away for ten minutes or so, and I just sank into breath-oblivion.

I’d done a solar practice earlier, with lots of backbends including Ushtra-asana (camel). Some how though, being able to surrender onto the YoGoBolster opened up my upper chest in ways working actively into Ushtra-asana just hadn’t been able to. When I finally came off the YoGoBolster, I was hit with a delicious high of opening… ahhhh… now that’s why we do yoga!

You can buy the YoGoBolster online from YoGoGear’s website for NZ$66 + GST & Freight.