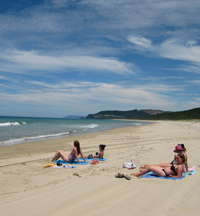 Retreat is a funny word.  It’s evolved over time.

Back in the day it meant to run away or draw back from the enemy. It was a bit of a cop out.

Nowadays, we focus on the second half of the word. Treat!

To go on a retreat is to find a safe place, a haven.  Perhaps to get away from a different kind of enemy; the worries and stresses of everyday life.

So when I was offered the chance to join my Mum and sister at my second Ashram Yoga weekend, a Revival Retreat in the gorgeous Coromandel, I signed on the dotted line.

Ashram Yoga Ohui Retreat.  Five minutes from Opoutere, just out of Whangamata on the Coromandel Peninsula.

This is Ashram Yoga’s Revival Weekend.  Ashram Yoga are an Auckland based yoga centre with a unique teaching style based on Paramahamsa Satyananda’s system.  They’ve been operating since 1980.

Shanti, as he is known, has over 30 years experience teaching yoga.  He is a former director of Satyananda Ashram NZ and has established yoga centres in New Zealand, Australia and Fiji.  He is the senior teacher at Ashram Yoga and travels throughout NZ and overseas taking courses on the yogic sciences and techniques.

Premajyoti attended her first yoga class ten years ago and continued in her study, participating in many classes, courses and yoga events.  She undertook the advanced meditation courses, full teacher training and yoga nidra programs at Ashram yoga and was the Revival weekend students’ guide in yoga nidra, postures classes, karma yoga and kirtan.

Premajyoti works as a counsellor and enjoys sharing and integrating her yoga knowledge and experience in to her work.  Her calm, grounded persona was like a centre of gravity during the course.  My favourite moment was when she brought out her knitting.

Atma is a director of Ashram Yoga.  She’s been teaching since 1992 and conducts seminars and administrates 24/7 for Ashram Yoga.  She studied yoga with Shantimurti after living in the Satyananda Ashram as a teenager.  She was the main facilitator of the course.

The accommodation at Ohui is set about 200 metres back from the beach, beneath sighing pine trees.  Tui call from native bush and sheep answer from the surrounding farms.  Cicadas burr in the flourishing plant life.  Accommodation is fairly basic but very clean and tidy.  You can be offered anything from a caravan to bunk bed or two bed rooms, adjacent to spotless bathroom facilities and the nearby yoga practice room.

The main villa and meeting place is a cheery canary yellow and here the students mingle for chat and the best vegetarian food in the country.

The beach is a simple stroll and I had my first swim of the summer there.  I’m a coastal junkie so didn’t expect to be surprised but Ohui’s beach is ridiculously beautiful and for the most part deserted (early December).  It stretches its fine white sand in a languorous smile from pine farm hills northwards to an invisible Opoutere in the South.

Ten women and one man, from a variety of backgrounds and ranging in age from late twenties to early sixties.  We were a chatty group and there was much exchanging of emails and facebook names at the end of the weekend.

How we spent our days:

Since this was a Revival Weekend the emphasis was on relaxation.  The schedule offered yoga posture classes, philosophy, yoga nidra (hmmmm, zzzzz), kirtan at night, karma yoga and yoga nada (yoga of sound).  While other Ashram retreats are more disciplined in their approach, this weekend the wonderful instructors were very flexible with start times and there was a friendly emphasis on eating and sharing over cups of tea!

Most yoga classes include breath work but Ashram Yoga regards it as an essential ingredient in the yoga soup.  Pranayama, if done regularly, can be the salt in your life; adding flavour, intensity and stamina.  I reconnected with the nine count breath and even now am using the techniques I learned that weekend.

Although I’ve been to Kirtan before, the weekend really opened my eyes to the relevance these practices can have for your everyday life.  I learned about chanting in to the chakras and how singing/chanting is thought to balance the left and right sides of the brain.  Now I hop on to YouTube when I can’t remember the words and Om along to the many mantras people have recorded there. Truly a 21st century yogi approach, or am I just being lazy?

Shantimurti’s known for his great stories, often outside the realm of what many of us might have experienced.

He spoke of a guru he’d visited who lived in a cave. The guru could speak any language in the world.  He even spoke Niuen to Shantimurti’s Pacific Island mate.

He told us about continuing his sadhana (personal spiritual practise) to chant 108 Oms at a certain time of day, while on a plane.  Afterwards the little old lady sitting next to him asked what he was up to?  He told her and others nearby and ended up chatting about yoga for some time to a group of strangers at 30,000 ft.

Shantimurti is fascinated by the science of yoga, its mystical side and its effect on the body and brain.

Atma’s partner Prasad is the resident cook at Ohui and is a deity in the kitchen.  His roti, the cumin spiced tofu, Atma’s citrus bliss balls and the unbelievable guacamole are things that ‘make me go hmmm’.  The couple teach a vegetarian cooking class out of Ashram Yoga’s Parnell base.  For more details email Atma on yoga@ashramyoga.com or visit the website.

A bit more about Ohui:

Ohui literally means ‘a place to meet’ and people have been using it for that purpose for hundreds of years.  Now its home to Ashram Yoga’s retreat centre and their neighbours Prana Eco Retreat (where the famous Prana New Years Eve festival was recently held.  Ashram Yoga hosted Prana Festival’s five yoga sessions a day and supplied all the food to the big tent, so you may have tasted their fare).

Although the weekend was intended to be relaxing, I found it challenging.   Every class, from posture to yoga nidra seemed to unearth a different emotion I’d packed down and built over.  It felt like I was dismantling myself and by Sunday afternoon, despite the serene surroundings, I was raw and fragile.  I couldn’t help asking… if I was digging all this stuff up, then where was the buried treasure?

Since I’ve been home though, there’s been a number of intense moves forward in my personal life. I’ve given far more attention to my breathing, understood the concept of karma yoga and gained an interest in chanting.

As well, I’ve walked out of Ohui moving towards looking for the positive instead of detailing the negative in others and myself.  It has been an interesting shift in perspective.

Maybe I’ll evolve over time too. 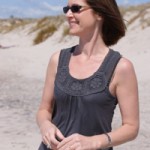 Jan Goldie is a writer from Tauranga, Bay of Plenty.  She creates copy for websites, dabbles in fiction and aspires to pen more freelance articles.

She has two daughters, a penchant for overseas travel and gluten free food (not an easy combination!) and her most memorable yoga class was at the top of Mount Maunganui.

After forty minutes of huffing and puffing, the serenity of stretching in the early morning sunshine to a soundtrack of tui was inspiring.

Other yoga highlights include asanas knee-deep in the warm waters of Bintan Island, Indonesia and the amazing Ashram Yoga retreats in the Coromandel.