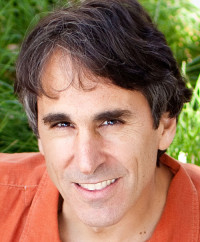 An internationally recognised teacher, writer, and entrepreneur with over three decades of experience, Peter Sterios is one interesting guy.

He was once a professional rugby player and lived in New Zealand for eight years – An American making a living as a rugby player. He was in New Zealand when he met his yoga teacher Zhandor Remete of Shadow Yoga – a teacher he ended up spending twenty years with before Zhandor cut him off and told him it was time for Peter to go his own way.

Along the way, Peter has also continued practicing as an architect, noting that most of his work seems to be yoga studios and retreats now, and he founded Manduka. In the late 1990s Peter discovered “a simple, elegantly designed black mat whose combination of firm grip and complete support revolutionized his yoga practice”.

Other people wanted that mat and so a business was born. Peter is still involved with Manduka nearly twenty years on.

As a result of Zhandor’s insistence that Peter find his own way to teach yoga – that he not just teach what Zhandor taught – Peter was forced to go within and find his own intuitive sense of teaching.

The result was something he’s come to call Gravity & Grace – thanks to the insistence of the Hollywood producer working on his first DVD.

The Practice Principles were created to help keep instruction during practice as simple as possible, intentionally vague in terms of musculoskeletal technique, and more for directing attention towards points or regions of the body were resistance is present and movement is limited.

These are the places in the body which offer the clearest guidance for what is necessary to create balance, and with new awareness, allow the practitioner to feel the influence focused attention and proper breathing has to effect change.

The Practice Principles are not meant to replace your own intuitive ability to adjust in the present moment of a pose. They are meant as a new framework for seeing what’s necessary in developing a more intimate relationship with yourself, to interpret the messages or language the body uses to communicate what’s needed in any situation.

Peter’s articles have appeared in Yoga Journal, Yoga Magazine, Elephant Journal, Fit Yoga and Huffington Post. He now splits his time between writing, teaching, and creating videos like Gravity & Grace, which was voted Top 15 yoga DVDs of all time by Yoga Journal.

Peter is coming to New Zealand in November and December so I got to talk to him and find out more about what makes this guy tick. See below for details on the retreat he’s leading at Aro Ha just outside of Queenstown and the free yoga classes he’ll be teaching.