You are here: Home / Yoga Articles / Awakening • Creating a More Beautiful World / Musings from the Mat / On the Way Fear and Limiting Beliefs Keep Us Silent 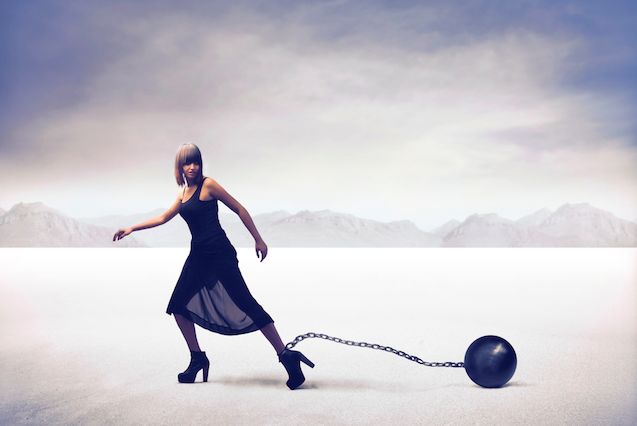 I have been observing a pattern of mine in relationship for some fifteen years now.

I first became aware of it in 2000, during a two and a half year relationship with a beautiful man that adored me. Despite becoming aware of it then, and seeing how destructive it was for our relationship, that same pattern deepened in my next relationship, from 2002 – 2004.

That pattern of behaviour was part of the reason the end of this particular relationship tipped me over the edge into two episodes of psychosis.

Yet still, despite my awareness, despite the destruction and suffering this pattern was causing in my relationships and to my partners… the pattern continued on in my next two long-term relationships.

Finally, after a ten day teacher training with Shiva Rea in 2010, I resolved to end this pattern of behaviour once and for all, regardless of the consequences.

Because I had observed also that I perceived a trade-off within this pattern – either act from this pattern, or lose the relationship. That was my belief, the one that was keeping me stuck despite my level of awareness. I knew I had to challenge this belief by breaking the pattern once and for all.

What was this pattern?

Not speaking my truth.

Acquiescing instead of agitating.

As an empath, I could intuitively tell how to act, be and speak in order to keep my man ‘happy’.

Combine that skill with someone who had a deep attachment and desire for relationship at all costs and you create a recipe for disaster.

Until I didn’t anymore. After Shiva’s training, I came home to my ten month old child and a challenging relationship. I resolved that I would speak up in each moment as appropriate, regardless of the potential conflict it might cause. I would do so from a container of unconditional love.

These were to be the twin pillars of my relating – unconditional love and clear-sighted speaking.

That relationship, over three years old at the time, lasted another two months in the crucible of love and truth.

Finally I was freed. I ended the relationship deeply loving my partner, and choosing a different experience for myself and my young child.

Three years later, I was in another relationship and I observed that I had grown quiet. When I spent time with this man, I wasn’t saying much. I realised that I had fallen into the same pattern again.

I had intuited on a deep level that speaking up would end the relationship, and I didn’t want it to end.

The moment I noticed the pattern, I changed it. I began to speak up. The relationship deteriorated into conflict and separation. We lasted another few weeks, if that.

It’s now been two years and I have yet to enter into a romantic relationship. When I interviewed Cameron Shayne a year or so ago, we were talking, off camera, about men, women and relationships. I casually remarked,

‘I beginning to think no man can handle me.’

Cameron was quick to catch me on that one – he wasn’t going to let me get away with that!

‘What does that mean? What would it take to ‘handle you’? Why do you need handling? Does that belief serve you?’

I pondered what Cameron had said and realised he was pointing to something crucial. As long as I believed that no man could handle a clear and honest me, it was unlikely I would cultivate that kind of relationship.

Over the last year in particular, I have developed a clearer sense of who I am and how I operate. I’ve begun to realise that not everybody sees or perceives the world in the way I do, and that I have particular strengths. In relationship, it’s crucial that these strengths are allowed to shine otherwise I disempower myself.

And it’s not my partner that gives me permission to shine these strengths – it is only me.

One of these strengths is the ability to deeply feel other people. I can sense the nature of their being on a physical, mental, emotional and energetic level. This is why I am a yoga teacher and guide, and why I can write the way I do.

Out of this ability to sense and perceive, and out of the work I have done on my own journey over the last two decades, I also have an ability to perceive what is needed to create less suffering and more joy. I see where people are holding on and when they’re acting from fear.

Another strength of mine is my commitment to waking up. It is the guiding light in my life and the way I orientate myself. It is the only thing that matters. In this moment, can I see and perceive clearly the nature of reality as it is?

My strengths feed into this, providing the fuel that burns away the illusions of small self and ego.

This means that I live my daily life in a multi-layered and faceted manner. I see and perceive the whole, on an energetic level. There is a constant deepening into the simplicity of the way and a shedding of the inessential.

This too is a great strength that I am learning to apply in my working life.

As I realise, own and step into these strengths and my own power, I am also getting a clearer sense of the type of man who is my match on this journey.

I’ve been greatly helped by one of the primary male relationships in my life right now, that I have with my flatmate. He too is a single parent, and we share a house with our two children. This means we’re running a household together, supporting each other as parents, and we’re in constant daily conversation. As my son Samuel says;

It’s meant that without being in romantic relationship I have had the opportunity to observe myself in relationship to a man. The added bonus to this is that there is far less emotional entanglement or stickiness, far less attachment and way more acceptance of each other as we are. We have no claims on each other.

Best of all, I’m getting daily practice at relating to a man I care about and love without having a relationship at stake. I have never been more fully myself than I am in this relating. I am learning how to speak up when it’s necessary, speak truthfully when it matters to me, be discerning when it’s required, honour the other person’s boundaries, set my own clear boundaries and stand tall in my strengths.

Of course, none of this would work if it wasn’t for the character of my flatmate. If he wasn’t the man he is, I would still be triggering him, and he would still be getting defensive and pulling away from contact.

He’s open and receiving and insightful. He has identified his own relationship patterns around people-pleasing and not speaking up and so is working on changing that pattern in himself. He’s open to self-reflection and self-realisation and using relationship in service to this.

This means I’m getting an experience of relating with a man who is open to receiving my gifts and using them to wake himself up.

That belief that Cameron deftly shone a spotlight on is being proved wrong.

I now know, thanks to sharing a house with my flatmate, that there are men out there who can handle me. And not only handle me, but appreciate me and my gifts and use them to their advantage.

No longer will I silence myself out of fear.

No longer will I disempowered myself to hold on to a relationship.

It may have taken over fifteen years since I first observed that pattern within, but I am finally free of it.