You are here: Home / ARCHIVE / Kirtan / What does Modern Kirtan Sound Like? The Story of Manika Kaur 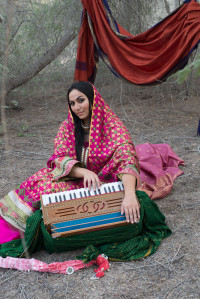 Manika Kaur with her harmonium

Blessed with a voice so pure it permeates your body and washes away your troubles in one soothing note, Manika Kaur is a rare and gifted soul.

Her songs are the music of true devotion and her mission is to heal the world with her voice, as Manika says, hers are ‘Kirtan for Causes’ with all proceeds from her music going to charity.

Her recent video “Guru Ram Das Rakho Sarnaee” has received an amazing worldwide response with over 41⁄2 million views on YouTube.

Born and raised in Melbourne, Australia, Manika came from an extremely spiritual home where the family was, quite literally, responsible for spreading the teachings of the Sikh founder Guru Nanak Dev ji.

Her family would have the Sikh Holy Scriptures brought to Australia and then personally distribute them to many Sikh homes across the continent.

It is impossible to describe the feeling of growing up in such a unique environment.

Every night our parents would tell us stories about our Gurus, and then later my brothers, sister and I would have ‘jam sessions’.

Manika moved to Dubai after she married in 2006. It would have been easy to slip into a laid-back life in the lap of luxury, but in her words,

I knew I wanted to make a positive contribution to humanity but I had no idea how, so I prayed. ‘Kirtan for Causes’ happened without me even realizing and I feel blessed to be walking this path.

Graced with a divine voice and writing poetry since she was little girl, Manika spent a lot of her growing years mimicking her favorite singers, musicians and ragis.

Despite her lack of musical training, an Australian producer recorded an English song with her before she moved to Dubai.

In Dubai, she recorded some more English music with another producer and went on to win a radio competition (by popular vote) for singing an original composition in December 2008.

Her first recordings were in English with western producers until she met bhangra pop star Sukhbir Singh at a social event and that’s when Manika’s dream of recording an album came to life.

While the shabads are traditional, the album has a distinctly laid back feel with tracks that transport you to a beautiful island.

And just as the sun would soak your skin and the waves would wash over you, so does her enchanting voice that soars and glides like a bird.

Sukhbir’s production brings Indian and Western instruments together to create a universal sound, and even for those that don’t speak the language, the message is crystal clear and very pure.

Every last penny raised through Manika’s music is donated to help others less fortunate than herself, or to building new Sikh temples that offer a place for her community to share, learn and practice their faith.

When her album was released in Dubai and India she raised over a million dirhams, which helped finance a new Gurdwara (temple) in Dubai. Manika will now focus is on educating impoverished children in Punjab.

With the worldwide album release of Satnam Waheguru she is raising funds for The S.O.S Initiative, a humanitarian organization focused on uplifting Sikhs in India out of poverty.

Their S.O.S Initiative focuses on educating children and ensuring that they reach their full potential in hopes of breaking the painful cycle of poverty.

Spreading the message has been surprisingly easy for 31-year-old Manika, and music is her way of giving something back.

Music is a wonderful medium through which one can spread any message. God has been really kind to me, and I’m sure I can do more.

I have been blessed with a very comfortable life, but I feel that I must do something for those less fortunate than me. And I honestly believe that if each of us can look out for others a little bit more, the world would be a much better place to live in.

Music has no barriers, which is why it brings people together.At times you don’t need to understand it but you feel it.

Kirtan has something more extraordinary, when you connect to it; you are connecting to the purest love. This is why people often cry when they listen to or sing kirtan.

It is hard to describe the feeling even for someone like me who is unable to fully grasp the true meanings of our Guru’s teachings, it feels like floating in a warm pool of light!

To learn more about Manika Kaur please visit her website, or for music and photos email Vinod Gadher.