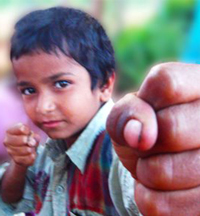 Kia Ora! Have you ever wanted to use yoga to make a positive difference in the world?

About a year ago, Wellington yoga teacher Alanna went to Mysore to volunteer with Odanadi, an amazing organization that rescues children from human trafficking in India.

Odanadi has rescued more than 2000 victims from the sex trade, abuse, and bonded servitude in some of the poorest communities.

They run a sanctuary where survivors can live, go to school, receive counseling and medical care, and eventually reintegrate into society as strong confident individuals.

This year, Yoga Stops Traffick is coming to New Zealand, and we’d love for you to be involved!

During the week of March 4-10, yoga teachers all over New Zealand will be running classes and events in support of Yoga Stops Traffick.

This could take the form of a regular class, a special workshop, a film screening, or a yoga mala of 108 sun salutations on March 10 in solidarity with other participants worldwide.

If you’re a teacher, please consider running an event and donating the proceeds, and if you’re a yoga practitioner, please encourage your teachers/studio to get involved.

We are looking for a few “early adopters” to schedule an event during the week of March 4-10 that we can list on our calendar in January, so that other people can see it and be inspired to host events themselves. If you could commit to doing this, that would be fantastic!

If you have any questions, please use the contact form on Yoga Stops Traffic NZ, or join us on Facebook.

“In Karma yoga no effort is ever lost” – Bhagavad Gita