You are here: Home / Yoga Articles / Starting • The Foundations of Yoga / Reviews / Lessons from the Overwhelming Success of LoveLake Festival 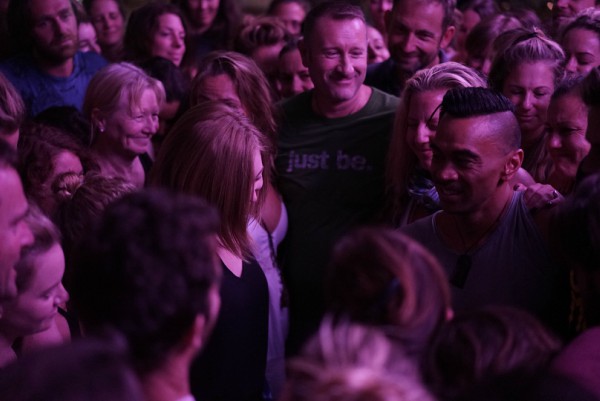 Right from the beginning of LoveLake Festival, there was a collaborative sense of ‘we’re all in this together’. Photo by Cameron Sims of Plant Culture.

Five weeks and three core staff – that’s all it took to produce a full programme at LoveLake Festival including yoga, meditation, workshops and DJs in three different rooms over four days. Oh, and another four people who joined in the final week for delivery.

That, and incredible support from Wairakei Resort Taupō, who hosted the event, and massive buy-in from the conscious community, including the presenters. Because it was a bold move by DJs Chris Scott and Sandon Ihaia to take on the mantle of the entire festival, after Jules Harvey agreed to put their two page proposal to Wairakei Resort.

Says Chris about the weekend;

“The most powerful emotion I felt throughout delivering the festival was a profound relief, watching the NZ yoga and mindfulness community embrace this event and fill it with the love and energy that allowed it to feel whole and right.

Without the support of the community – the instructors, musicians, vendors, the resort, our event team and all of the attendees – we would never have been able to create this beautiful new experience which has brought so much happiness. So all of my thanks to everyone for being a part of it and we can’t wait to see you again.”

Vendors showed up with zero expectations, because they knew that their presence would bring the vibe the festival needed. Eco Yoga Store made a last minute decision on the Friday of the event to bust a move and get set-up for Saturday morning. YogaTribe and Teeki also joined for Saturday. 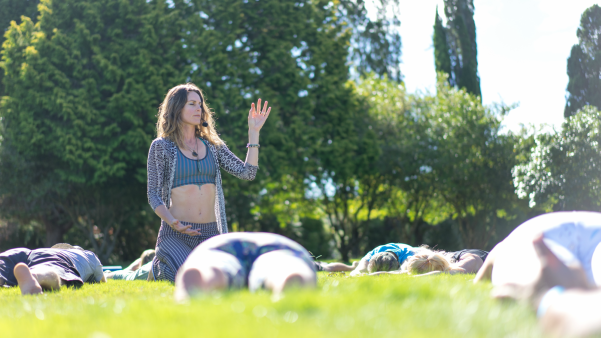 And holding down the fort right from Thursday afternoon were Zeenya Clothing – along with their gratitude tree, WE-AR Clothing, Stitchbury Clothing, Gypsy & Soul and Whai Ora Smoothies. Anti-Gravity came from Mount Maunganui and put up a swing because, as owner Abbie said;

“I thought it would be fun for people.’

It was that spirit that marked the essence of the festival – people showing up and bringing their gifts to contribute because they cared about the event. And it showed. Right from the powhiri that marked the Opening Ceremony, there was a collaborative sense of ‘we’re all in this together’. 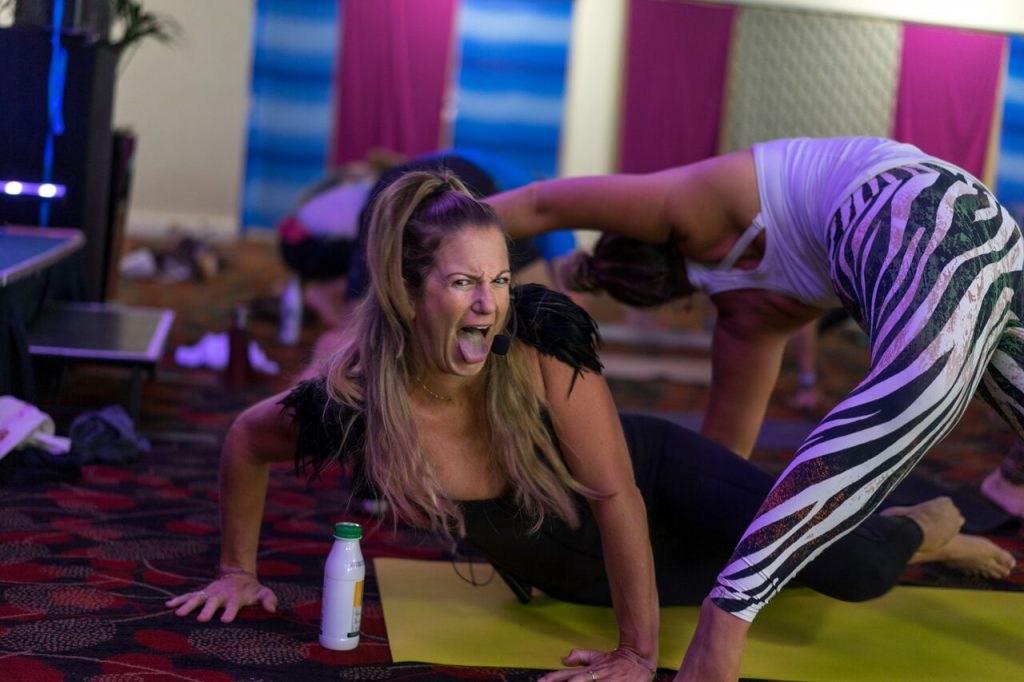 Nikki Ralston crawling under Justine Hamill in Call of the Wild.  Photo by Cameron Sims of Plant Culture.

“When everyone involved, is practicing yoga – things evolve with ease. Plus when you invite people in to co-create and participate, it shows that you value people, when people feel valued… and amazing things happen.

And, as a teacher, I felt less pressure to ‘perform’ so what came out over the festival was authentic sharing and heartfelt connection.

As Justine and I shared in Goddess Revolution -no more playing small, no more putting someone down to elevate yourself.  No more shrinking and hiding your treasures from the world, it’s time to shine” 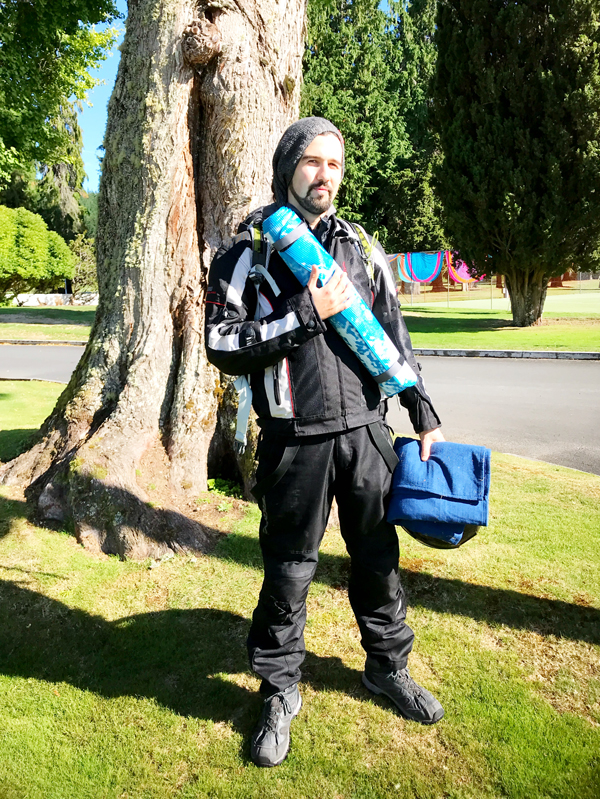 Motorcycling Yogi, about to ride back to Palmerston North

What mattered was the way people showed up, the vulnerability and transparency of all the presenters – many of whom were still grieving for the loss of Jason Corliss – and the whole-hearted participation of the festival goers.

One gentleman rode his motorcycle over from New Plymouth, and he was typical of the people who showed up. A girlfriend had taken him to Wanderlust a couple of years ago – she was now long gone. But his passion for yoga and the community remained.

Another man had come with his wife and never done yoga before. He got at least three classes in on Saturday, including Bros Who Can’t Touch Their Toes with Jase Te Patu and Dancing the Dragon with me.

“It became apparent to me, throughout the weekend, that there was an overwhelming amount of love and support that was coming through from the students, presenters, musicians, and even the tech guys!

I was touched by students who were beginners, who did not fit inside the image we have of a yoga practitioner and yet were willing to show up and have a go.

Lovelake was a grassroots festival that kept our feet firmly on the ground but allowed our hearts to soar… it’s the kiwi way.” 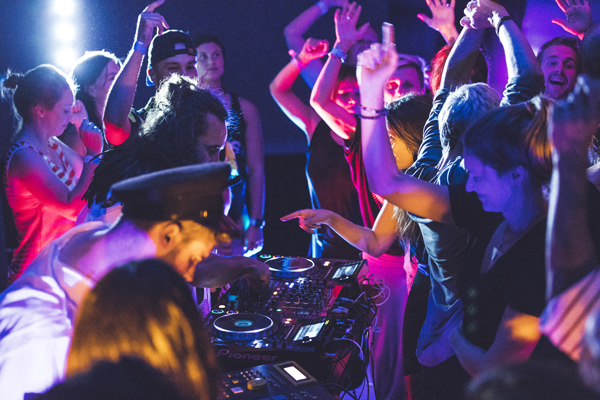 Yet it wasn’t just about the yoga and meditation and workshops – it was also about the dancing.

Friday night, River Roots took the stage outside, and the dance floor filled up. Friday Night Food Markets was running concurrently, open to the public, and Taupō locals watched curiously as the yogis went wild on the dance floor for a solid five hours.

DJs came and went, but still the crowd danced on. I’d never witnessed such a cohesive dance floor at a yoga festival. It was partly due to the rocking tunes the DJs were dropping – Mia Paris blew the crowd away with her sexy, radiant Goddess power backed up by dope tracks you couldn’t NOT dance to… I tried to pull myself away from the dance floor a couple of times… but the beats were too insistent. 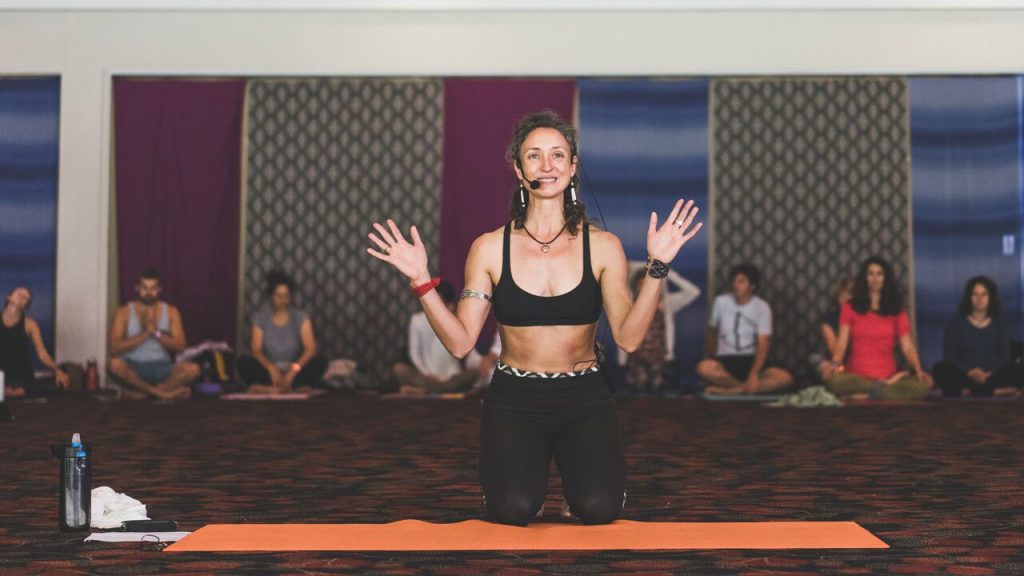 It was also helped by the presence of many of the presenters cutting loose all through the night, including Melissa Billington and Wilhemeena Monroe. Despite Melissa needing to get up super early the next morning to lead a 7am Water Ceremony down by the stream.

Later, Sweet Mix Kids threw down in Te Whare Papa, while DJ Seraphim sweet-talked the bar. And that was just the Friday night. Saturday night, it happened all over again. This time with Leo Bass Chakra, dressed to kill in techni-coloured rainbow, and not shy about hitting the dance floor during a track if he thought the energy was flagging.

Over in Te Whare Papa, Sola Rosa filled the big rooms with beautiful spacious tracks that drew a floaty crowd stoked with the expansiveness of the dancefloor. The lights cast shadows on the back wall, and I joined a friend in creating Shadow Shapes as we danced… including spirit birds. It was play, and dance, and expression, and joy, and bliss, all wrapped up into one.

Though we’ve all lead things over the weekend, we all also took time to receive, and it’s in giving and receiving that we all learn and grow.  And that dance is such a fun, joyous thing –  even when it challenges us! 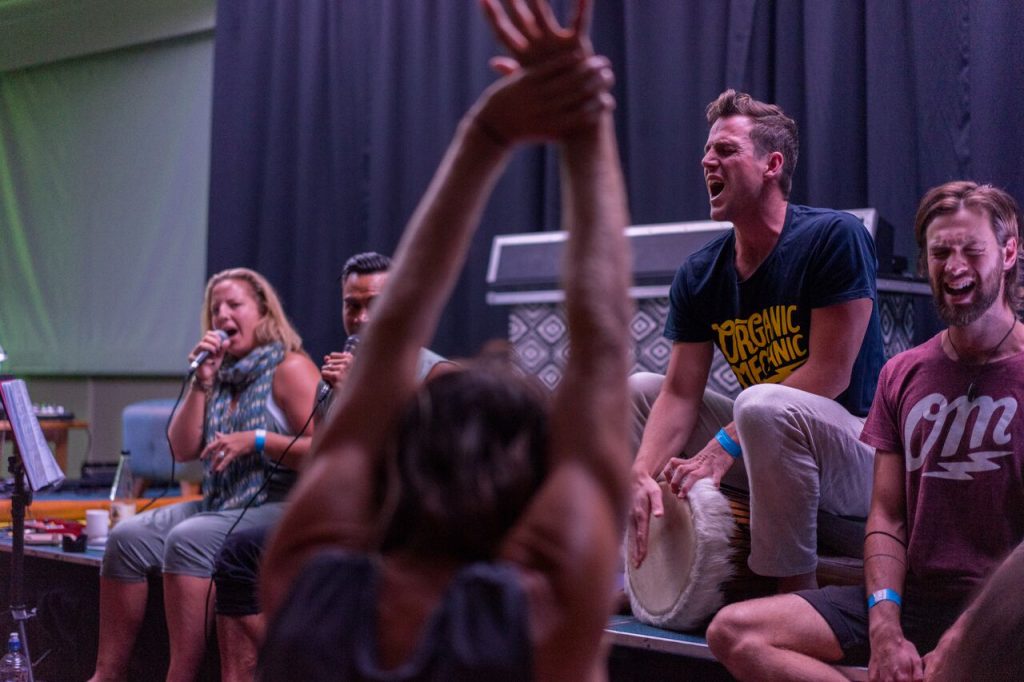 The final day of LoveLake Festival was streamlined into one class in each time slot, creating a convergence of souls in Te Whare Papa.

We started with Connie Causa and Nick Corliss delivering Wind Force – a breath work and meditation class. That effortlessly flowed into Nikki Ralston with Call of the Wild, a strong asana class that spontaneously erupted in free flow dance. Closing out the day was Jase Te Patu, Justine Hamill and Shane Hamill with Acoustic Yin, ending in Kirtan.

In reality, it was one six hour yoga class, that people could dip into and out of at their leisure. Nik Robson has already taken everyone into a Four Hour Yin Journey on the Saturday afternoon, inviting people deep into a cave to confront their dragons… in contrast, Justine, Jase and Shane lovingly held the final Yin with a sweetness backed up by tear-jerking songs from the 70s and 80s.

That cohesion was one of the strengths of LoveLake Festival. The classes supported each other, rolled into each other, held each other. There were only ever three choices, which held the festival goers in a continuum of connection. And the messaging from the presenters echoed and mirrored each other.

These were lessons that the presenters had lived through. They were hard-won, and they were embodied.

“I think the biggest lesson is that NZ has some kick-ass talent and we don’t need to keep bringing in overseas people but rather celebrating all of the amazing beauty we have right here.

LoveLake Festival felt like a celebration of NZ, of lifting each other up and realising that WE ARE ALL ENOUGH.  We don’t need the shiny Overseas Celebs to create an amazing event.

LoveLake Festival had more heart and soul.  It had a sense of community, love, friendship and joy.  It had everything to nourish my mental health.  Nature, movement, good food, great company, meditation, pranayama, and it had the best hugs ever.” 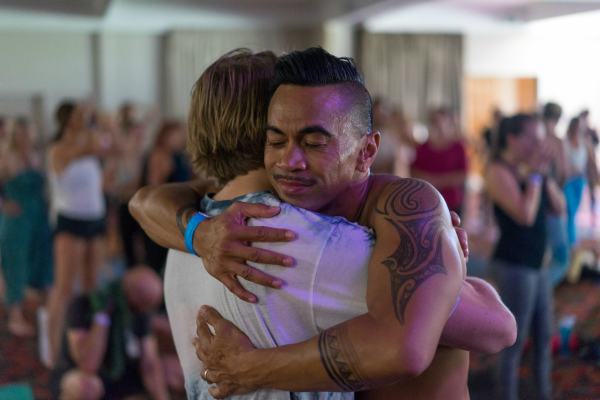